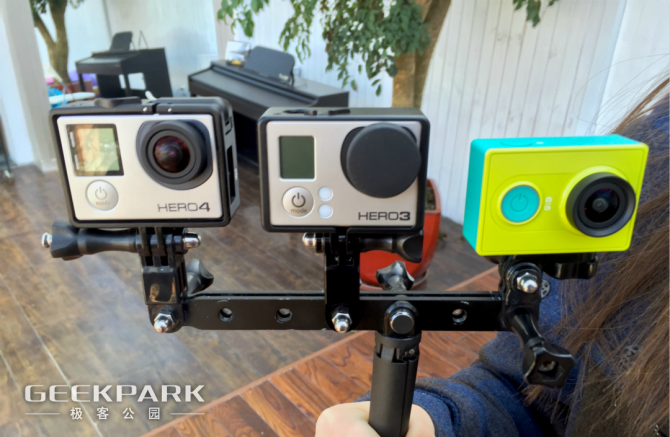 Two Chinese reviews, one by pcpop comparing the Yi Action Camera to the flagship GoPro 4 Black and the cheap SJ4000, and another by Geekpark comparing it to the GoPro 3 and 4 Black editions, reveal new details regarding the highly anticipated new kid on the block.

Other than sharing new specs and features, the reviews include video, contrast and low-light shooting comparisons.

One of the concerns with such a cheap camera is that cheap often comes at a cost. Does the low price indicate low quality?

Overall the camera seems to give a rather impressive bang for the buck, but will it work in crowded spaces?

Starting with the most basic information, it’s been confirmed that the Yi Action Cam has a ¼” female thread. This means the camera can be mounted directly to tripods, quick-release plates, monopods, selfie sticks etc without having to use it in a housing or with an adapter.

We knew it could be mounted without a housing based on the original photos, but the exact mounting method was unknown. 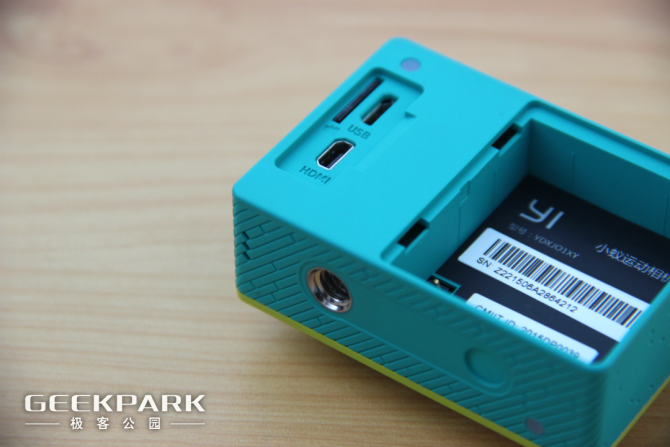 Looking at the back of the Yi Action Cam we see it has the same MicroSD slot, mini-USB and micro HDMI ports. Conspicuous by its absence, however, is what GoPro calls the HERO Port – an expansion port which allows add-ons such as the LCD Touch BacPac or the Battery BacPac.

With no indication at the moment that Xiaomi intends to manufacture tiered cameras like GoPro, it seems the Chinese company believes that most people don’t want/need or aren’t willing to pay for such accessories.

The Yi Action Cam, as is also mentioned in one of the reviews, is not intended to compete against GoPro’s flagship models. While it does give them a run for their money, Xiaomi is able to offer such an awesomely priced camera by not offering the most cutting edge features (4K) and mostly unnecessary bells and whistles such as optional screens and batteries. 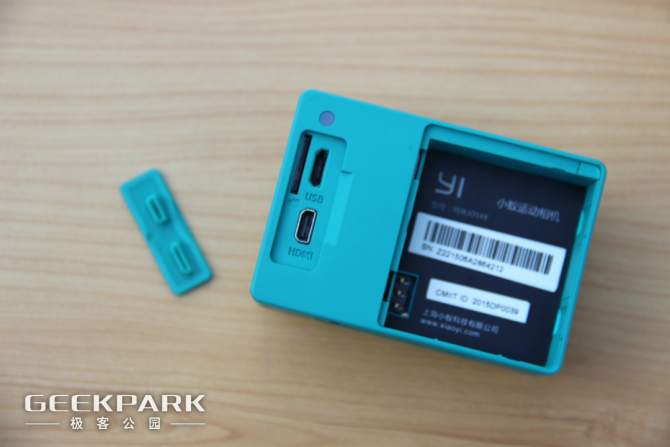 No expansion port = no optional LCD screen or battery pack

Next up is the battery. The Yi has a 1010mAh battery, compared to the SJ4000’s 900mAh and the GoPro 4’s 1160mAh, placing it comfortably in the middle. An optional battery pack would be a welcome add-on for longer shoots, but this battery should be just fine for most uses and it’s a small price to pay in order to pay a small price (for the camera). 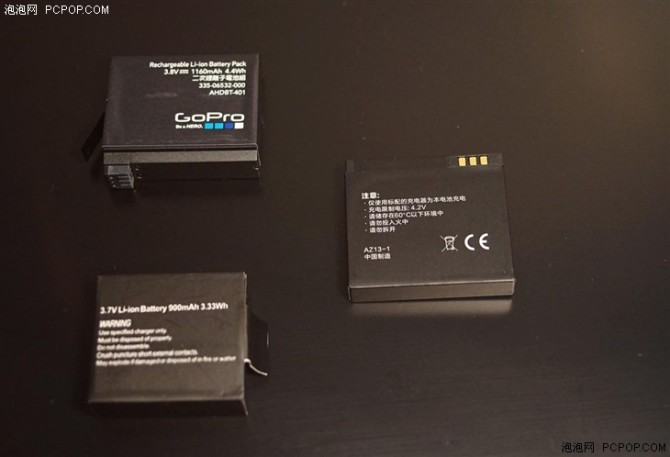 Approximately 10% weaker than the HERO4’s bettery, the YI’s 1010mAh battery places it between the category leader and the cheap SJ4000

One of the main reasons the GoPro became so popular was that the company offers a plethora of mounts and accessories. The company took off thanks to the camera being able to go almost anywhere and film almost anything. Most of the low-tech accessories are compatible with the SJ4000 and so are some of the more advanced ones. There are also plenty of cheap/knock off accessories, making these cameras even easier and cheaper to use.

As of now Xiaomi has only announced it is planning to sell a waterproof housing, pet harness and a Bluetooth remote control; in addition to the selfie stick that comes in the Travel edition of the camera.

That’s a rather poor selection of items but while it is unknown at this time whether the Yi Action Cam will be compatible with GoPro accessories, it’s obvious that a lack of self-branded low-tech accessories such as head and chest straps will not faze potential clients if the products are compatible.

Based on a photo of the waterproof housing, it looks like the quick release buckle and thumb screw of the GoPro accessories will work with the Xiaomi. 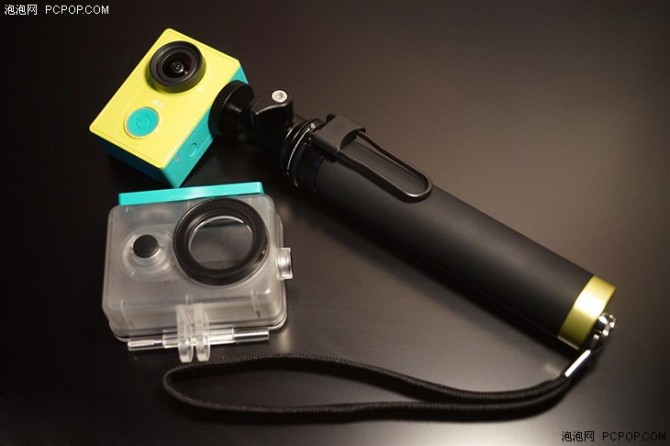 Looks like some of the GoPro accessories will be compatible with the Xiaomi Yi Action Cam, but we will have to wait and see. 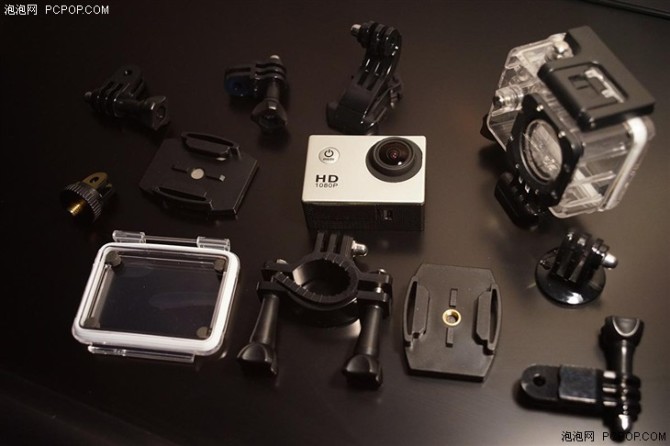 Unlike the GoPro 4 Silver edition, the SJ4000 and the GoPro 4 Black with the optional LCD Touch BacPac, the Yi Action Cam does not have a built-in screen and it cannot have one connected to it (no expansion port, remember?).

This means your only way of seeing what the camera ‘sees’ is by connecting to your smartphone via the dedicated app.

While that sucks, this next thing is way worse. If you own one of the other brand cameras you know that other than using the app to turn your phone or tablet into a monitor, you can also use it to control the cameras settings. Well get this – due to the Xiaomi’s lack of an LCD status screen (the front screen), you have to use their app to change any settings on the camera!

The camera’s three buttons seem to only be used to turn the camera on/off, start/stop recording and to turn on/off the WiFi.

Want to change your frame rate? Want to switch to stills? Whip out your phone!

This isn’t a problem if you’re taking a video in your backyard, but it’s an extremely limiting feature in an action camera.

I don’t consider myself a heavy GoPro user and I can think of several situations where I wouldn’t have been able to use my GoPro the way I wanted to had I not been able to control it directly. Diving is the first activity that comes to mind, but there are many others.

Also, I was recently taking a time lapse at a basketball game and took the opportunity to connect my GoPro to the airship flying around the arena. Due to the thousands of people there with me the GoPro and my phone failed to connect via WiFi. For me it meant that I couldn’t show the airship operator what we were filming (we ended up getting mediocre results) and we had to bring back the airship every time I had to change one of the settings. For a Xiaomi user, however, such a problem will mean being stuck on the same mode without being able to change any settings whatsoever. 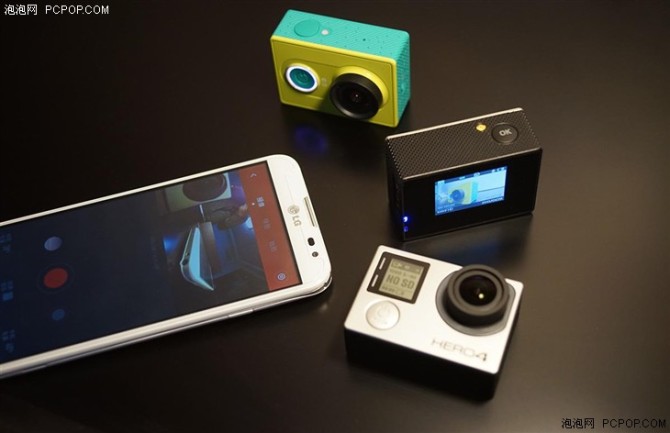 Perhaps the SJ4000’s only advantage over the other two is the built-in screen. The Xiaomi is definitely the weakest in this regard.

That being said, if all you want to do is record video and you rarely change your settings – you’re golden. Simply use the start/stop button on the camera itself and you’ll almost never need to connect it to your phone.

I guess this is another one of the compromises that allow the camera to be great in certain fields and still sell cheap.

Time for some good news, especially since you might be using the app a lot more than you’re used to with your current camera. Geekpark says the app’s interface is friendly and easy to use. With a straightforward setup process and a detailed step-by-step guide all the way from connecting the camera to shooting, Xiaomi’s app is said to be a lot easier to use than GoPro’s. 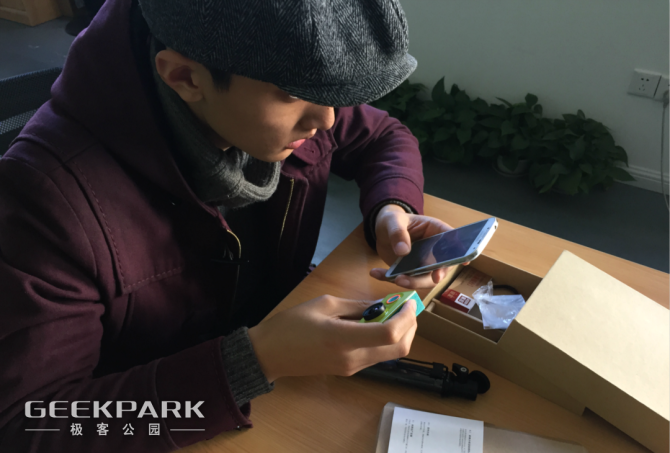 Even beginners will have an easy time setting up the camera

Just as important for the local market, and Xiaomi’s bank account, the app offers Chinese support which apparently the GoPro doesn’t.

Not to break the habit of mixing the good with the bad, the app currently supports only Android. Hopefully it will support iOS by the time it reaches the market. 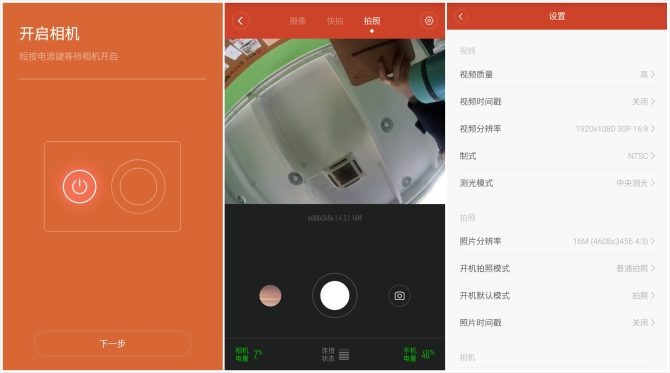 Friendly interface (as long as you’re an Android user)

The Yi Action Cam uses the same video processer manufacturer as GoPro, though it uses an Ambarella A7LS processor compared to the A9 chip in the HERO4 and the HERO3 Black’s A7.

For this review Geekpark set the three cameras to shoot 1080p/30fps and mounted them to a parallel testing device (see top image).

The video below is SOOC and has not undergone any post-processing:

Unsurprisingly the HERO4 wins with the best image quality and reduced shakiness. The previous flagship camera, the HERO3, came in second but Geekpark mentions the Xiaomi did pretty well and is overall pretty much matched with the HERO3.

The next comparison is a set of outdoors still images and is testing the Yi’s 16 megapixel Sony back-illuminated Exmor R CMOS sensor.

Check out the details in the shadows and how much of thy sky is blown out.

Next is a low-light situation. Once again the top photo is from the Xiaomi Yi Action Cam, next is the GoPro 3 Black and last is the GoPro 4 Black.

The HERO4 is once again the winner, but the Xiaomi is described as ‘very good’.

Trailing after the others is the HERO3 with its ‘unsatisfactory’ metering system.

Geekpark concludes that there are significant gaps between the HERO4 and the Xiaomi, in both stills and video, and I don’t think that will come to anybody by surprise. That is to be expected with the GoPro costing almost 8 times as much.

Keep in mind that the HERO4 was ‘handicapped’ for the video comparison, as it’s able to record 4K/30fps, so the gap is even bigger than depicted here.

Overall though the Xiaomi Yi Action Cam is definitely a decent camera and it even outdid the HERO3 Black in certain situations.

GoPro does has a head start of several years leading to it having a very useful Bluetooth remote, plenty of superb accessories and dedicated editing software. These are all points Xiaomi will have to work on, and I have no doubt they will as long as there’s enough money to be made doing so.

Geekpark recommend the Yi Action Cam for beginners and those who want to experiment with it due to its low price and relative convenience of operation. It will also suffice for backyard videos and less demanding situations.

For extreme sports, however, GoPro is still the undisputed king. 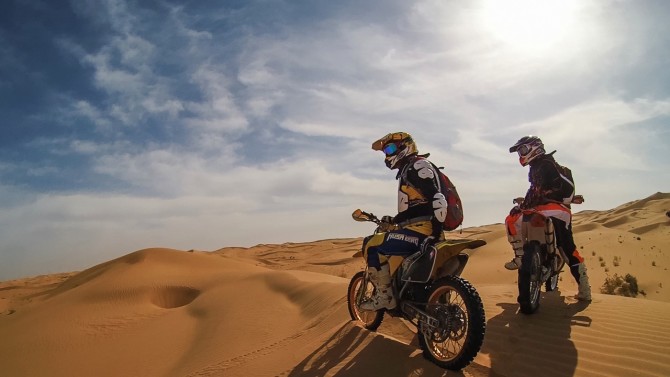 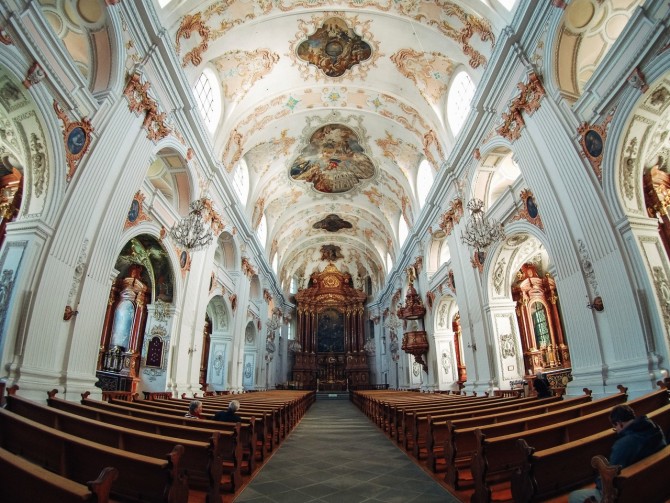 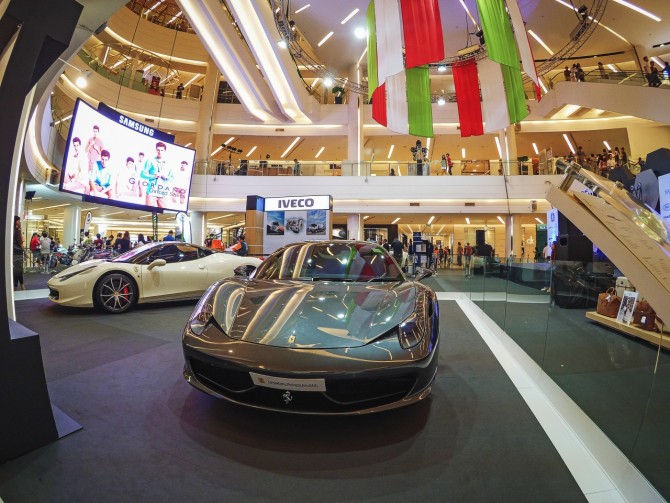 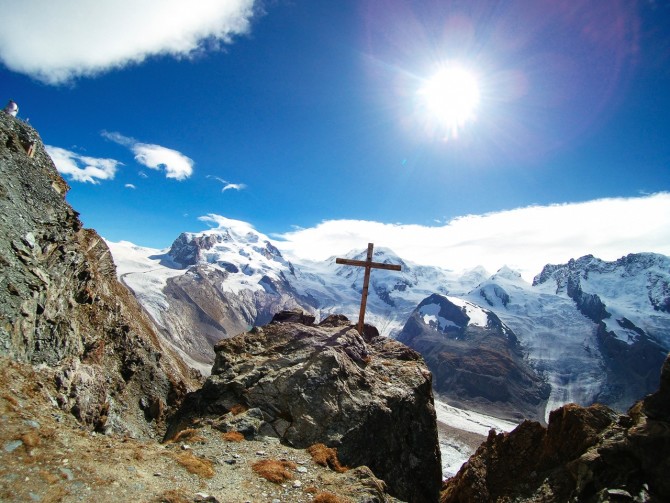 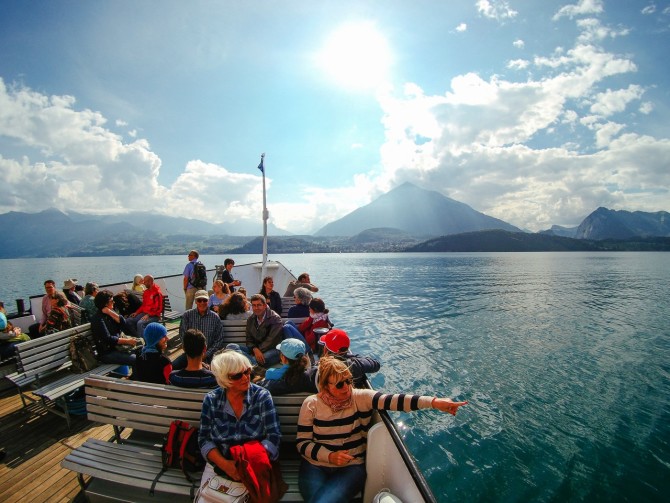 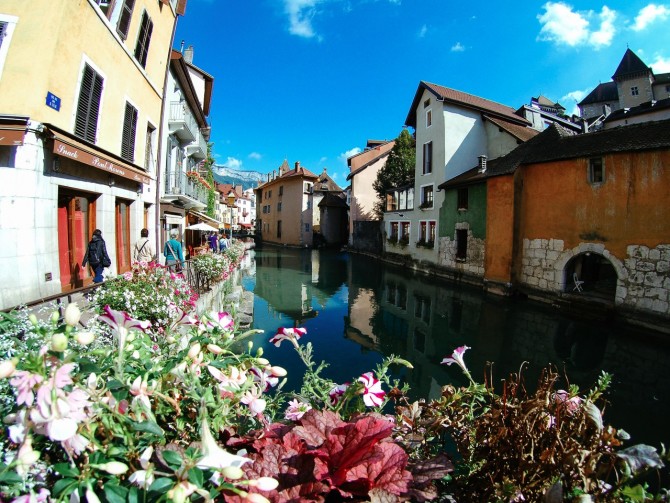 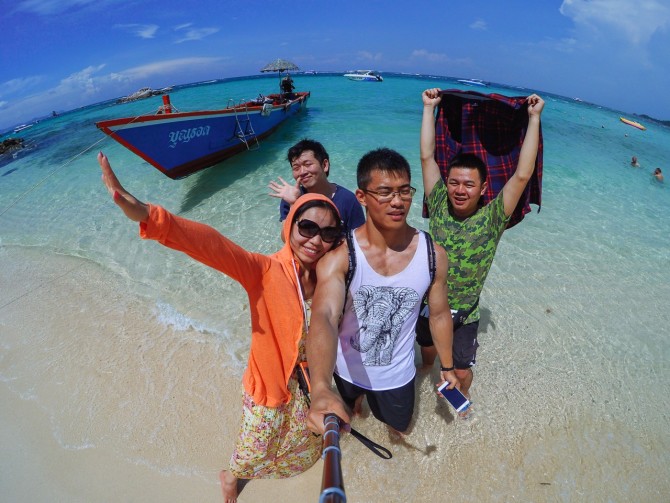 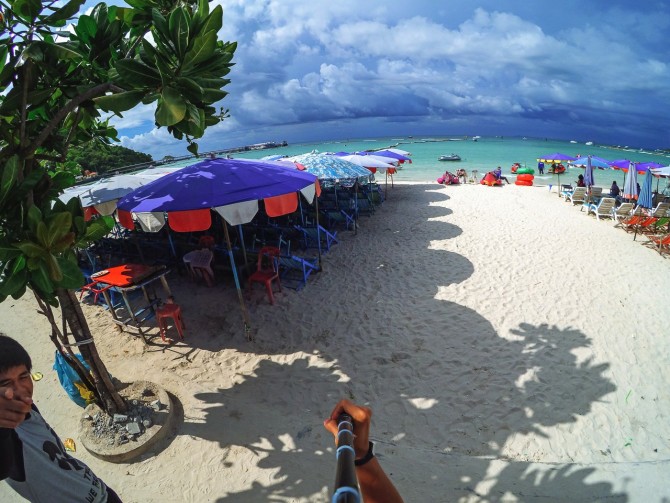 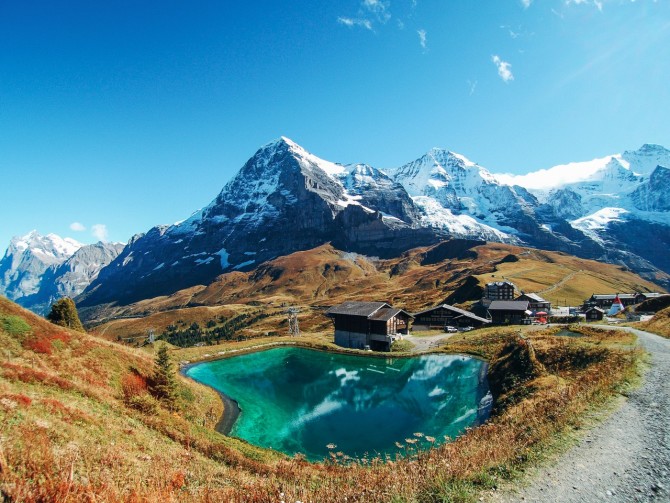 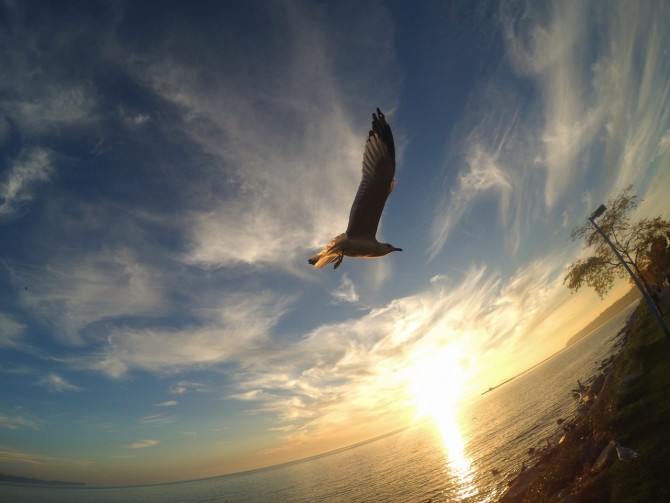 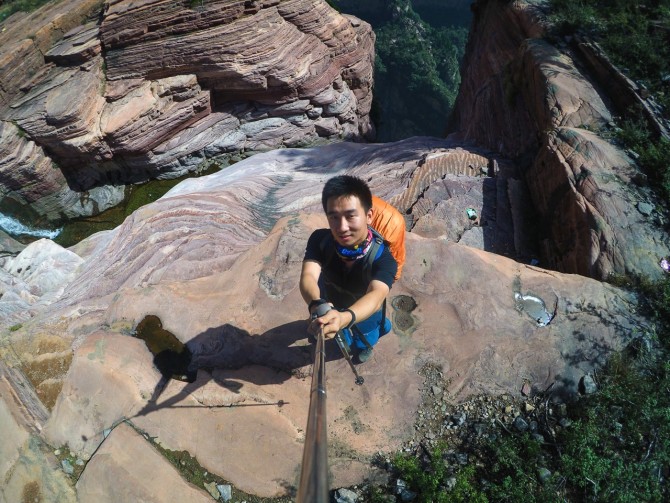 Head on over to pcpop and Geekpark for more photos and the full reviews.