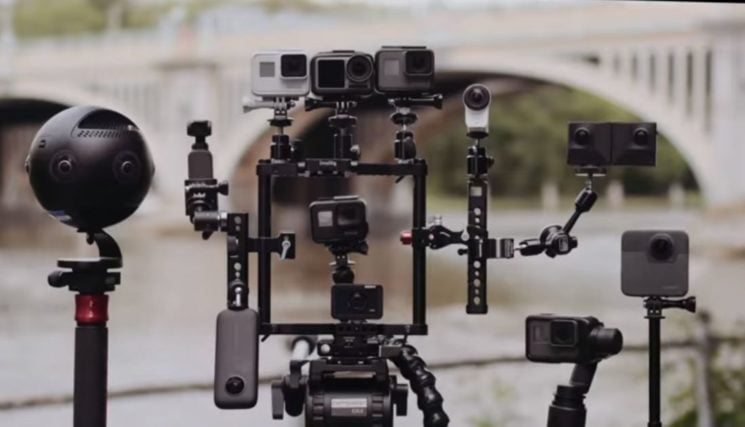 There are quite a few action cameras available right now. With the recently launched DJI Osmo Action, the market has become even more interesting. We’ve seen how it performs against its biggest competitor, GoPro Hero7 Black. But what if we compare it to other action cameras? In this video from Philip Bloom, you’ll see a side-by-side comparison of some of the most attractive action cameras currently available, including the latest one from DJI.

For the needs of his video, Philip created a pretty interesting rig consisting of four action cameras, and he also added two 360-degrees cameras to the comparison. Here are the cameras he used:

Philip compares the action cameras in all those aspects you will find important and interesting, such as stabilization, exposure, color profiles and more. He notes that the comparison is not scientific, but it’s a real-world test, which I believe is more useful to an average user.

The test is pretty in-depth and includes some of the most attractive cameras currently in the market. However, Philip doesn’t include the low-budget Yi action camera. You can see how that one stacks up against GoPro Hero4, although the latter is now already outdated. Some future comparisons could also include the recently announced Ricoh THETA Z1, but at the moment it’s not even shipping yet, you can only preorder it. So, I believe that Philip’s test comprises all the cameras that are currently the most attractive to users, and if you’re trying to make a choice, I’m sure this video will help you with that.

Is it time to switch to Windows for video editing? Philip Bloom thinks so