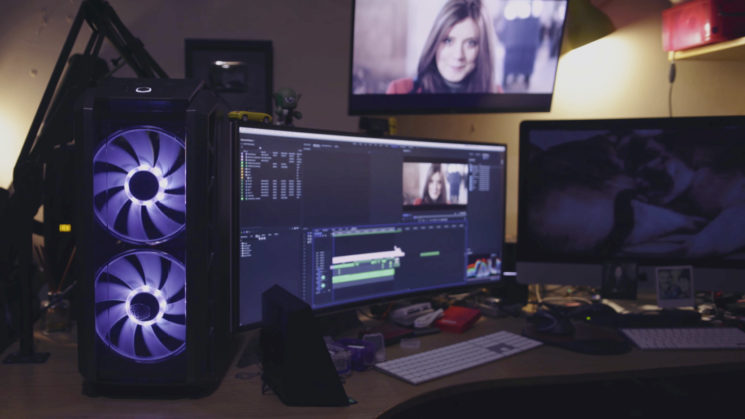 Quite a few folks seem to have been considering the switch from Apple to Microsoft ever since the whole MacBook Pro dongle thing. Not everybody, though. Some chose to stick with Apple and either just dealt with the dongles or buy Type-C USB cables for their accessories. It seems, though, that the idea of switching from Apple to Windows has been popping up again lately.

With the price tag for the high end versions of Apple’s recently announced iMac Pro coming in at over $13K, it’s understandable. One such filmmaker is Philip Bloom, who’s been having a go with a new MSI 4K editing workstation to replace his Mac Pro, which seems to be getting slower by the day.

Whether shooting stills or video, one constant seems to remain. Editing takes up far too much time. We all prefer to be out shooting, and Philip’s no different in that respect. But by far the biggest slowdown for video is the time it takes to render out the files.

While Philip’s been editing on his 2013 Mac Pro, his three and a half year old Apple is still sold as the current model in that line. And for Philip, it’s too slow. Recently he produced a Cinematic Masterclass, a nine and a half hour 4K course, which took around three months to create. He says that much of that time was just waiting for video to render and for the computer to keep up. So, he needed something faster.

A new top of the line iMac Pro is out of the question. A closed system with zero potential upgrade future is no good to him, nor to many others. So when MSI approached him to try out some of their kit in a Windows based 4K editing machine, he gladly accepted. So, here’s the hardware around which his new Windows PC is based.

That’s a total of around $3045. Of course, you need to add storage to this, too. Say, a Crucial 1TB SSD system drive at $259 and a couple of Western Digital 6TB hard drives for storing footage at $189 each. You’ll also need to buy a copy of Windows which will set you back another $119 or $199 depending on whether you go with the Home or Pro edition.

This brings the final total to a little under (Win10 Home) or a little over (Win10 Pro) $4,000. And, of course, there are other manufacturers out there from whom you can buy components. Personally, I’ve always been a fan of ASUS components in the PCs I build. I just find they offer me the greater longevity than any other manufacturer I’ve tried with fantastic performance.

As a die-hard Apple user for 15 years, Philip was pleased with how well everything seamlessly transitioned over to the Microsoft OS. All his Adobe software settings were stored in the Creative Cloud, so when he installed Premiere and everything else onto Windows, it worked as it had always done on his Mac. Only faster. WAY faster. 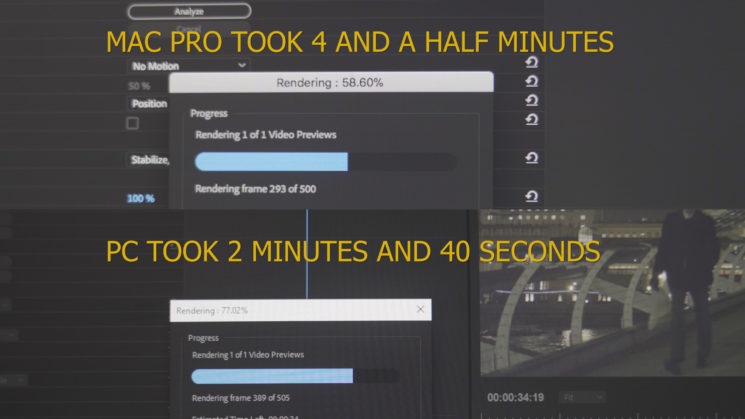 Doing some side by side comparisons rendering out the same clips with the same adjustments applied, render times were brought down by around 40%. The actual editing process itself was even faster and smoother. Thanks to the graphics card with an NVidia chipset, he’s now also able to utilise Adobe’s Mercury Playback Engine while editing. He can scrub through unrendered files with effects applied whereas his Mac Pro would simply choke. It isn’t perfectly smooth, but it’s a drastic improvement over not showing at all.

It looks like MSI are making a big promotional push for PCs since the iMac Pro price announcement. I’ve seen similar such videos from The Film Look, Tom Antos, and Learn How to Edit Stuff, to name but a few, in the past couple of weeks. Their motive is obviously to make people buy their components, although there are many great alternatives out there, like ASUS, Gigabyte, ASRock, EVGA and plenty more.

Although MSI did supply the hardware to Philip, too, his points are still quite valid. The primary ones being the speed of the system today given the cost vs the competition, and the potential for future upgrades. If it starts slowing down, he can whip the side off the case, add in some more RAM, go to a faster graphics card (or multiple graphics cards), a new CPU, or add any piece of performance-enhancing hardware he chooses.

[I want to] see friends and have a great time and not be stuck in an edit suite watching a progress bar slowly increase to 100%.

Philip notes that the new PC is also faster than his £4,000 (~$5,350) top of the range MacBook Pro as well as his fully specced out iMac 5K. He stresses that he is in no way leaving Apple Macs, though. He loves how they work, but the speed advantages of a purpose-built PC are undeniable, especially considering the cost. And Adobe’s software works the same on both platforms.

So, if you love your Mac, but want better rendering performance, you may be best going dual system. I know quite a few who edit on a Mac but still use a PC for the rendering grunt work. Even for those on Windows, many just use two PCs; One to edit with and one to render. Having a second computer to render on means your main computer isn’t tied up for hours when you want to continue working on something else.

Have you made the switch to Windows? Have you gone the other way and switched to Mac? Do you run both?