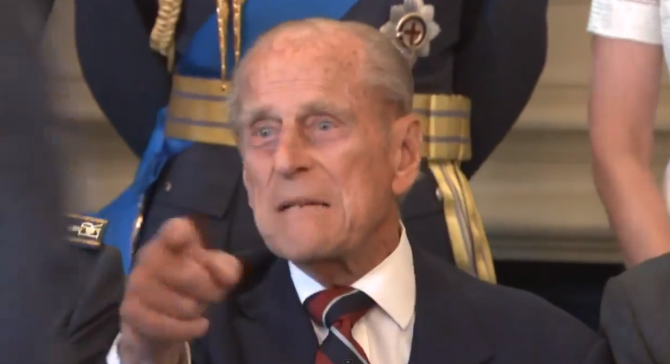 Any of us who have ever done portrait or wedding photography know what it’s like to work with a fussy client/model/subject who has a tendency to think they are royalty.  Granted, those cases are often few and far between, and it’s just par for the photography business course.  But, what happens when your subject is fussy AND royalty?

Prince Philip, Duke of Edinburgh and husband to Queen Elisabeth II, was at a photo-op at the RAF Club in London to commemorate the 75th anniversary of the Battle of Britain.  Apparently, the photographer wasn’t moving the procession along fast enough which is when the royal gentleman and veteran of the Royal Navy lost his royal temper.

In video footage from the event, the prince can be heard telling the photographer to “just take it,” eventually losing his cool completely and yelling, “Just take the f***ing picture!”  I guess when you’re the oldest-ever male member of the British royal family you can say whatever you dang well please.  His outburst was met with chuckles and laughter, including from his grandson, William, who is next in line for the throne.

Now, I believe I can confidently say that I will never have the honor/nightmare (depending on perspective) of photographing a member of any royal family.  But I can imagine that the pressure must be higher than for those of us who stick with shooting the peasants.

It’s not entirely clear whether the prince was legitimately angry or if he was just borrowing a schtick from Great Uncle Fred who curses at the Christmas turkey just because he can.  Either way, I’m certain it’s a story the photographer will be telling for quite a while.  I can just imagine his granddaughter crawling up into his lap years from now and pleading, “Grandpa, can you please tell the story about when the king said the f-word to you?”