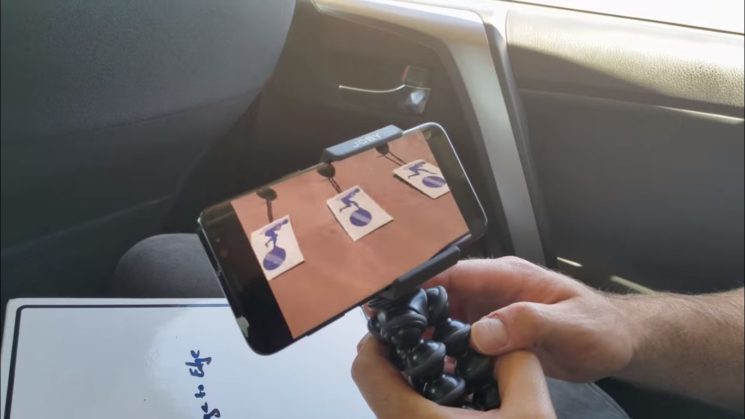 Most of the creatives have those ideas that keep stuck in their head and just won’t go away. Some of them are pretty crazy, they sound cool, but you don’t know if they would actually work. Filmmaker Max Joseph had an idea like this, and he shares how he turned it into a finished project although it didn’t seem possible.

Max wanted to use the dividers in the middle of a highway, cover them in art and film them as he drives by, so they turn into an animation. The project seemed impossible at first for many reasons. But with some brainstorming, adapting, help from friends and lots of trial and error – he did it and created an inspiring in-camera animation.

When Max first came up with the idea, he told about it to anyone who’d listen. But he admits it took years before someone actually got interested in it. Casey Neistat told him Samsung might be interested in the project, but the condition was to shoot everything on their phones. Max accepted the challenge and he was a step closer to turning his idea into reality.

First, he needed a road with a lot of stories and he wanted to tell these stories through the animation. He thought of the U.S. and Mexican border in Marfa, Texas. Then, he needed an artist to design the animation, and his friend Carlos Ramirez was a great choice.

Next, he and the crew did a camera test in the middle of the desert. They had to put up the signs with artwork, drive by them and film them, so they can determine the ideal speed and spacing between the pictures. And just when they managed to set everything perfectly, they realized there was a huge setback that might have hindered the entire project.

As Max says in the video, they concluded that it would take 19 days for 30 people to put up 4,000 signs alongside the road. The signs needed to be weatherproof, but it was even more important that they didn’t fall over, so they don’t cause any damage. All of a sudden, the whole project seemed impossible. But then, Casey had an idea that took the project in a new direction but remained faithful to the original idea.

Casey suggested they do the project on several roads instead of just one, and to put up posters instead of signs. So, if it was impossible on roads – it might just have worked on walls. The whole thing started in Brooklyn, and instead of putting up signs along one road, it ended up as a project that included hundreds of walls across the U.S. The story was modified as well, and I love the final idea. It became a story not about the actual road, but about the road we take when we create something. We can all relate to it.

The final result is an animation shot only on a smartphone, captured entirely in-camera. As Max explains, it tells a story about the way if feels when you have a good idea, the way it evolves and becomes real, the way you need to adapt with it, and the way you charge forward. It shows your fight with your inner demons, but also the way you finally embrace them and turn the impossible into possible again.

Both Max’s animation and this story about it are inspiring stories about the road we all take when we have an idea in our minds. It can be long and full of obstacles, but with the right mindset, good friends and lots of persistence, we can travel this road and be sure we’ll successfully get to its end.

[From Dream to Reality | Max Joseph]

« iPhone used to shoot the movie “Tangerine” to be displayed in Academy Museum
Is it time to switch to Windows for video editing? Philip Bloom thinks so »