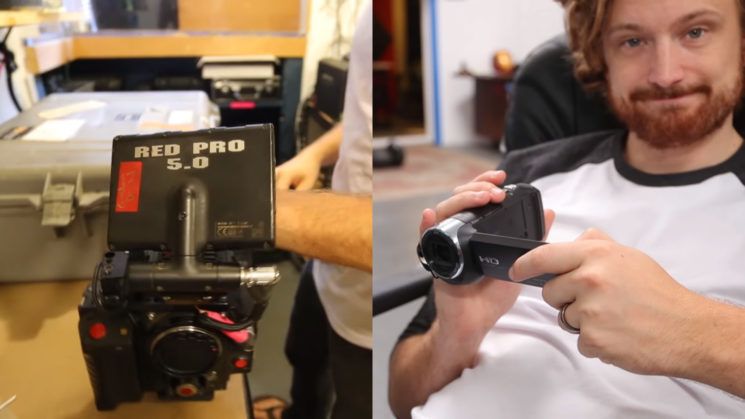 To compare a $50 camera to a $50,000 camera might seem a little unfair. And maybe it is, but whoever said that life was supposed to be fair? A battle between two video cameras at such opposite ends of the budget scale, though, does highlight some very interesting points. Such extremes illustrate the things to look out for when buying any camera.

In this video, Niko Pueringer from Corridor Digital performs exactly this comparison. Pitting a $50 used Sony Handycam HDRCX405 against $50,000 worth of RED Dragon 6K. The RED rig has actually cost the team $47,229 over the last three years, but they decided $50K had a better ring to it. Watch the video to see how the two compare.

It’s not really much of a surprise that the RED absolutely hammers the little Handycam overall. What is quite surprising, though, is the out of the camera footage, especially if you’re only working at 1080p. Without adjustments to the footage, and under ideal conditions, the Handycam does a rather good job of keeping up with the RED. 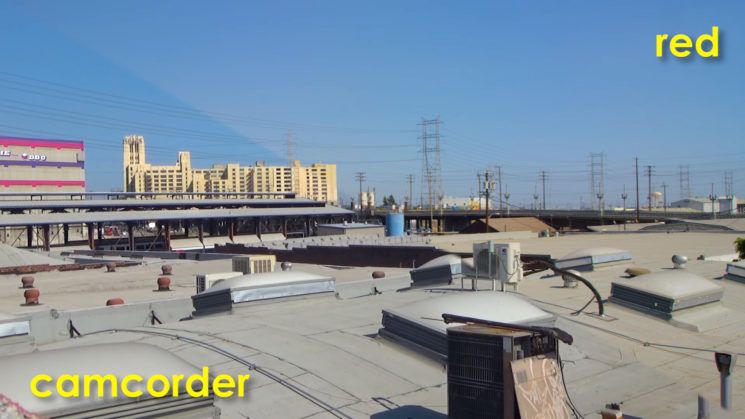 Once you zoom in, though, you do start to notice the difference. With the Handycam footage on the left, the detail becomes a blur, which isn’t helped by the in-camera codec compression. The 6K RED footage has no problem holding the detail. Of course, comparing any 1080p camera to a 6K camera would likely yield similar results. 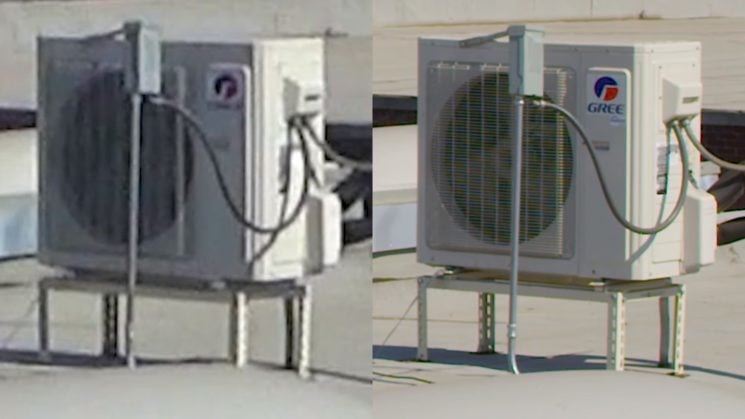 Another obvious difference when you look more closely is the amount of colour information captured. The way the cameras see colour and contrast is very different, and that lower resolution, along with codec issues, can cause colours to blend or completely desaturate. 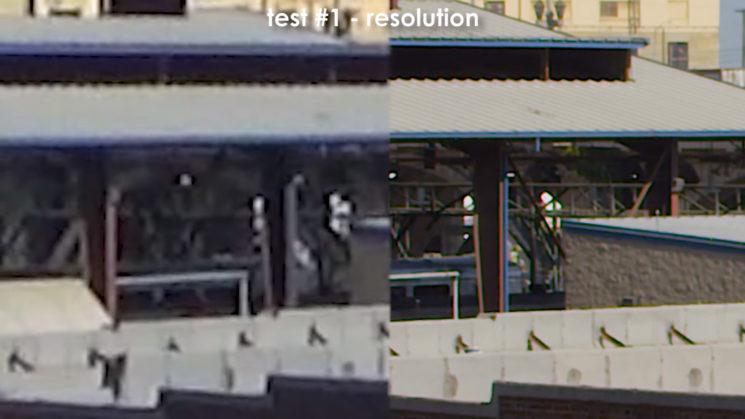 But such a difference in detail alone really doesn’t justify so much more money, does it? Of course it doesn’t, and Niko ran the two cameras through a variety of tests to push the limits of both cameras.

When you look at the footage from both cameras with the same scene overexposed by two stops, the difference is immediately apparent. The RED, with a wider dynamic range is able to hold more of that extreme highlight detail without completely losing it. We still see colour in the sky, some pale texture in the face, and the surface of the Aputure AL-M9 light still shows some detail.

Once you attempt to correct the clips to even up the exposure, the difference in capability between the two system is again obvious. 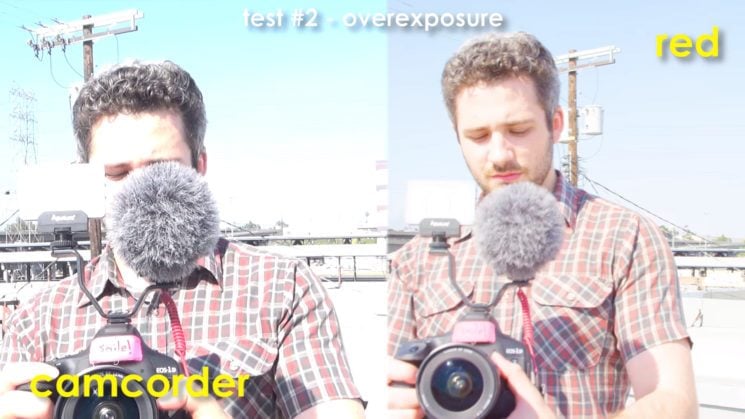 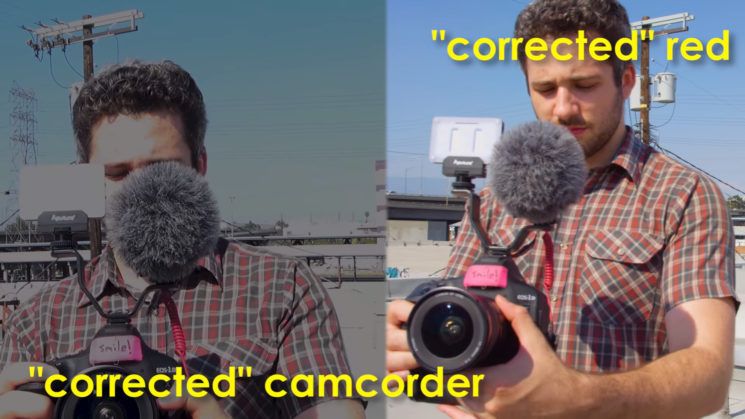 When corrected, the RED footage looks like there was never anything wrong with it. The cheap Handycam footage, though, paints a very different picture. Colour channels are blown out completely, turning the “recovered” highlights very dull and grey. Other colours are also very desaturated.

When we underexpose, the immediate differences aren’t so obvious. Yes there’s a bit more noise from the cheaper Handycam, but it’s not completely unusable. You do notice, though, just how much little detail is retained by comparison in those shadows once you correct the two clips. 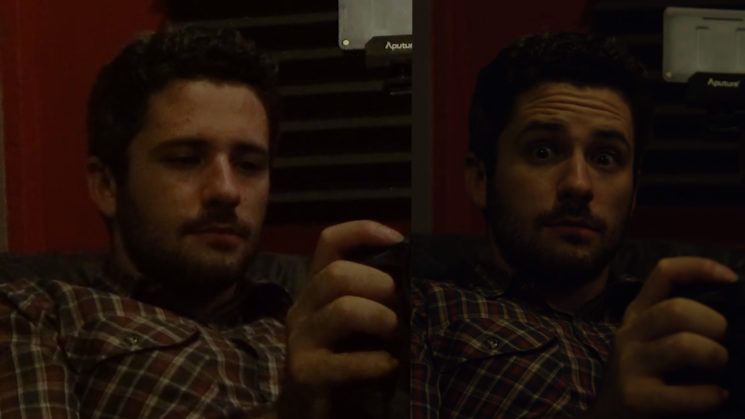 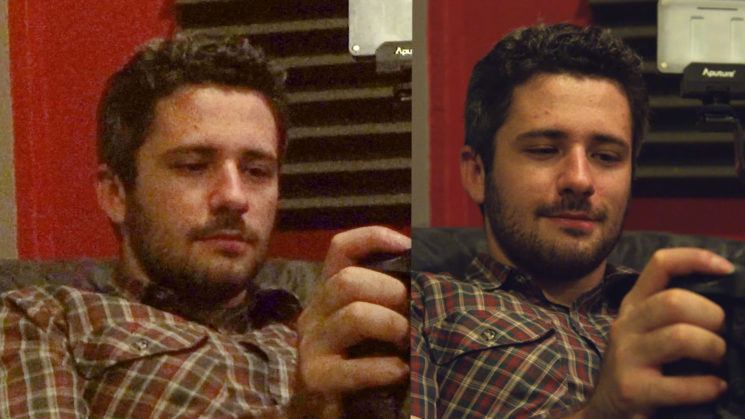 The difference now is very noticeable. What should be relatively clean areas of solid colour are packed full of noise. The shadow colours aren’t right, and the gradients between them are extremely noisy. The lower bitrate codec doesn’t help, either.

Another major factor is the bit depth, and this is the leading argument for the whole RAW vs JPG debate when it comes to photography. Higher bit depths means more tone & colour information in between the maximum and minimum extremes of the camera’s limits. The handycam footage quickly degrades and produces banding through the sky. The RED footage says relatively clean. 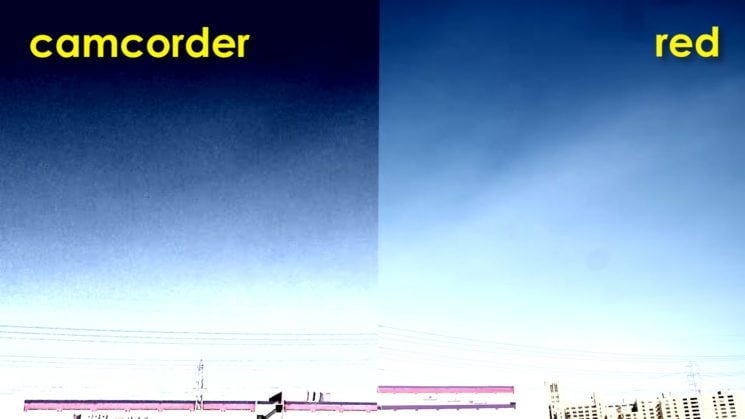 And, again, there’s that codec compression. Niko goes on to test dynamic range, compression artifacts and other issues. The RED obviously wins out every time. It’s just a far more capable system, which is why it costs so much more money. It’s totally not a fair comparison.

But, what it does do is give your some idea of the specs you might want to look out for when considering a camera for video yourself. There are literally hundreds, possibly thousands, of cameras out there that fall in the $50 and $50,000 range.

But no matter what your budget, seeing the best and the worst of a camera’s abilities can give you an idea of whether or not a particular camera is worth it for you.

Will you be able to underexpose to retain the highlights in high dynamic range scenes and be able to pull that shadow detail back? Are you going to lose colour as soon as you tweak a curve adjustment? Will you always be able to film under ideal conditions? Will you be editing and recompressing the footage even further?

The specs of the camera you buy don’t have to be the best that exists. Only good enough for your own needs. But now you’ve got some more information that’ll help you make a more informed decision. There’s no point buying $50K’s worth of RED kit if $2K’s worth of DSLR will do the job.

« Natural light photographers, here is how to start using studio lighting
These five pros say the gear matters, do you agree? »