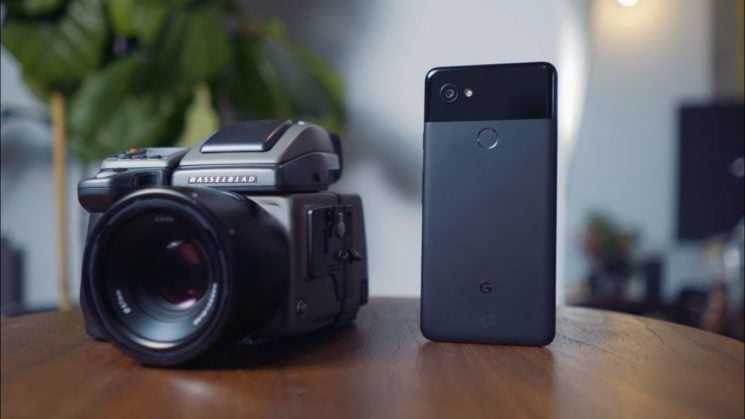 In recent tests from DxO, the camera of Google Pixel 2 takes the first place as the best mobile device camera they’ve tested so far. According to the sample images, it really does a good job, but how does it stack up against a professional camera? Tyler Stalman has decided to check it. In this video, he and photographer Jason Eng test Google Pixel 2 and a Hasselblad medium format system in different lighting conditions, and compare the results.

We’ve seen similar comparisons before, although mainly for the video. iPhone 7 Plus was competing with a RED Weapon camera, and iPhone X was compared to Panasonic GH 5. Tyler and Jason compare the quality of the photos taken with a $1,000 phone camera and a professional medium format system that costs twenty times this much.

For the first test, the guys are setting up the light so it creates a high-contrast situation. They are photographing model Ania Boniecka and compare the images they get with both cameras.

As Tyler points out, small-sensor cameras usually struggle with dynamic range. However, Google Pixel 2 uses HDR Plus feature to combine up to ten images into one final exposure, so it manages to save a lot of detail.

When we look at the normal size, all photos are usable and seem well exposed. When zoomed in, however, we can see that with Google Pixel 2 the shadows lose more detail. Also, Hasselblad has smoother transition even when the skin is overexposed. Google Pixel’s HDR saves the highlights from getting burned out but adds some undesirable texture to the skin in these bright areas.

When the photos are viewed in Lightroom, perceived sharpness on a smaller screen looks similar. But again, when zoomed in, we can see the difference. On Google Pixel, some “watercolor effect” starts to show on the skin. They didn’t shoot in the brightest environment, so the camera removed the noise and caused this effect.

So, can a phone camera beat a professional, high-end medium format system? Well, of course not. But still, considering that Google Pixel 2 is a phone camera with a significantly smaller sensor, it still does a decent job. Even if you are a professional photographer, I guess this phone camera will do for some casual shots. After all, you can even take a magazine cover or a worldwide-famous photo with a phone. You never know.