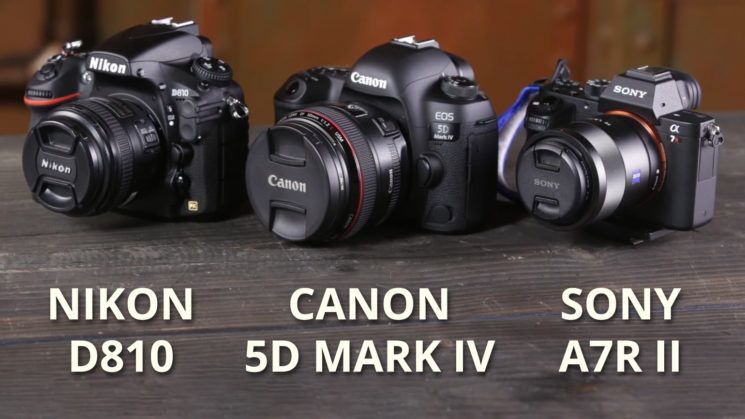 There are always new photographers trying to figuring out which system to buy into. There’s also experienced photographers considering switching. They post on Facebook and forums to ask the opinions of others. 99% of the responses will be suggesting the brand they themselves use. It’s inevitable, really. They promote what they know, without really knowing what the person asking the question wants to shoot. So, seeing comparisons can be a good way to get a little insight into how each system handles.

This video from The Slanted Lens is a bit of a departure from what we’ve come to expect. But, it can be a valuable one, especially if you want to shoot portraits.  Jay and his team put the Nikon D810, Canon 5D Mark IV and Sony A7R II head-to-head in a variety of real world shooting situations. They try not to come to any real conclusions, but just demonstrate how the different systems compare. This way, you can make up your own mind which is best for you.

There’s four main areas looked at on each of the systems. Each one going into a little more detail on specifics of each system.

A constant theme throughout each of the tests is handling, and this is actually a pretty big factor. It doesn’t really matter how good a system is if it feels awkward to use. But, handling is often a subjective and personal thing. I’ve used multiple cameras pretty extensively from all three manufacturers over the years, but I feel the most comfortable using Nikon. I know others who have similar experience with the different systems but prefer Sony or Canon.

One thing I found quite interesting was how the three systems stacked up when you compared the price.

That’s a pretty significant difference in price between the Nikon setup and the other two. In fact, the camera & lens together cost less than either the 5D Mark IV or A7R II for the body alone. It kept up just fine, though, and even seemed to win out on a few aspects. Of course, portraits are only one area. Each of the systems offer advantages that benefit the user in different situations.

Ultimately, despite how much information videos like this pass along, there’s really no substitute for trying them out yourself. Each manufacturer has a very distinct feel when you get the camera in your hands. Even between different models from the same manufacturer, there are differences. Some are quite subtle. Others, not so much.

So, whatever systems you’re considering, try to actually use them. Borrow from friends if you can, or rent. I’ll rent gear for specific jobs, but for things I want to test out to buy, I prefer the used market. I get to keep them for as long as I like to really put them to the test and see if I like them. If I didn’t, just resell them, and not take a huge loss. If I did, either keep them if they were good samples, or sell them and buy new with full warranty.

Are you still figuring out which system to buy into? Are you considering switching from one to another? Have you already settled on a system? Or do you shoot several? Let us know in the comments.

« What are the differences between selfies and self-portraits?
Veteran war photographer Don McCullin receives knighthood in 2017 New Year Honours list »