With Nikon and Canon finally entering the fray and the whole Panasonic/Sigma/Leica alliance thing, it’s starting to get quite exciting in the world of full frame mirrorless. It feels a lot like when DSLRs first came into existence. Of course, we didn’t have Facebook then, so people were more concerned with shooting than measuring.

But these days, kit comparisons are inevitable, especially with the rate at which technology is advancing and new products are being released. In this video, Jay P Morgan looks at the Nikon Z6 and Sony A7III cameras. On paper, they’re pretty close, with both cameras having some slight advantages over the other in certain areas. Some of Jay’s results, though, are quite surprising.

For the tests, the Nikon Z 50mm f/1.8 S was mounted to the Nikon Z6, with the A7III using the Sony Zeiss 50mm f/1.4 ZA. The 16-minute video covers a fairly extensive list of the two cameras capabilities. They look at everything from ISO performance and dynamic range to their video and slow-motion capabilities. 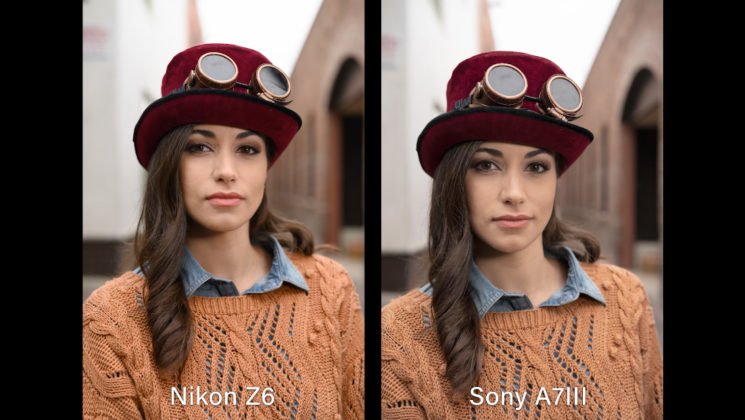 When it comes to image quality, both cameras seem pretty evenly matched. Which I suppose is to be expected, really. They did note a slight green shift coming from the images out of the Sony, although if you’re profiling your cameras with something like the X-Rite ColorChecker Passport or Datacolor SpyderCHECKR, I don’t think this will be much of an issue.

This was quite a surprising test. both cameras were exposed using the base exposure on the subject’s face, and then several shots were taken with the images under or overexposed by several stops in one stop increments.

While both cameras seemed to have fairly similar dynamic range, it was applied in the two cameras slightly differently. For the Nikon, it dealt far better with underexposure, with even five stops of compensation added in post yielding an impressive result. The Sony, on the other hand, looked like a dot matrix print when it was bumped five stops in post. 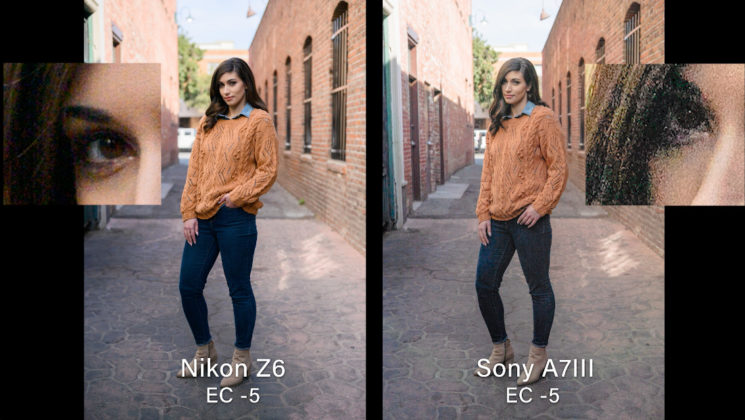 Overexposure was a slightly different story with the Sony holding details in the highlights that the Nikon lost when the exposure was brought down in post to compensate. 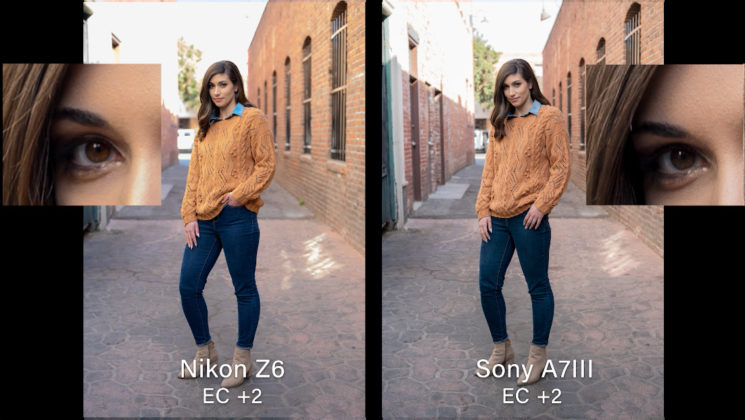 So, it looks like “expose to the right” is very much the name of the game for Sony shooters, while you might be better off underexposing slightly on the Nikon to prevent blowing out those highlights, knowing that you can safely recover the shadow detail in post.

The ISO performance test showed quite a noticeable difference with the Sony showing quite a bit more noise than the Nikon as the ISO crept up, as well as increasing that green cast. Autofocus was also similarly surprising, as the Z6, despite lacking Eye AF (it’s coming!), seemed to actually perform better than the A7III in this example. Although, they do note in the video that the A7III seemed to underperform in this test compared to their previous experiences.

For video, the results were also quite surprising. While both shoot 8-bit internally, the Nikon footage seemed quite oversharpened and processed compared to the clean footage coming from the Sony. Sony’s mirrorless cameras have become favourites for many hybrid shooters when it comes to video, and it’s an area in which they have a lot more experience than Nikon. Perhaps the Nikon could be improved with a settings tweak to reduce sharpening.

That being said, and although it would be a slightly unfair test, I’m curious how the Sony’s 8-Bit footage compares to 10-Bit externally recorded footage from the Nikon. Chances are, that although it may have a bit more colour depth to work with in post, the footage would be equally as processed and oversharpened. What really intrigues me, though, is how externally recorded footage will look from the Nikon once it gains raw HDMI output.

Looking at this comparison, it seems that if your goal is photography, get the Nikon Z6. But if video’s your thing, then go for the A7III. Neither camera is all that terrible for either situation, though, really.

You can see more of their results over on The Slanted Lens website.

Which of these would you go for? Which do you already own?

Canon 5D Mark III Goes Head To Head With A Nikon D810 — Which One Is The Winner?