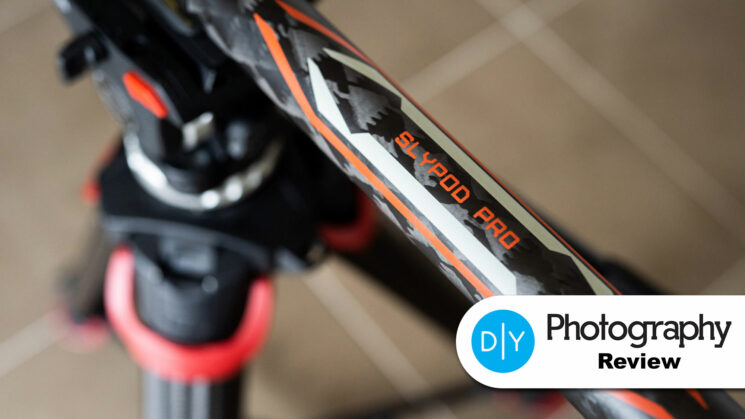 Sliders and monopods, what do they have in common? Absolutely nothing. Until now… In fact, they’re kind of meant for the opposite things, but the folks over at Moza have a really clever take on this, and they joined the two together. Now, we have the Slypod Pro, a brand-new slider/monopod combo that packs a serious list of things it can do.

The Slypod Pro is Moza’s newest addition to their product line, and they’re currently running a Kickstarter for it right now. The Slypod seems to be a very clever way to mash a slider and a monopod into one product. It is an upgrade to their existing  Slypod E, which had quite a few problems in the community. The host changes that Moza applied to the Slypod Pro show that they have been all ears. Many things that make the Slypod Pro so compelling now are a direct fix of the shortcomings of the first iteration.

Let’s start with built quality. The product is really elegant. When I took it out of the box, I was pleased to see that beautiful diamond carbon fiber pattern. It looks so cool, but in addition to being cool, it is also very durable. This thing can definitely take a beating. You have controls on one side, and on the other side, you have the extending portion of the tube. 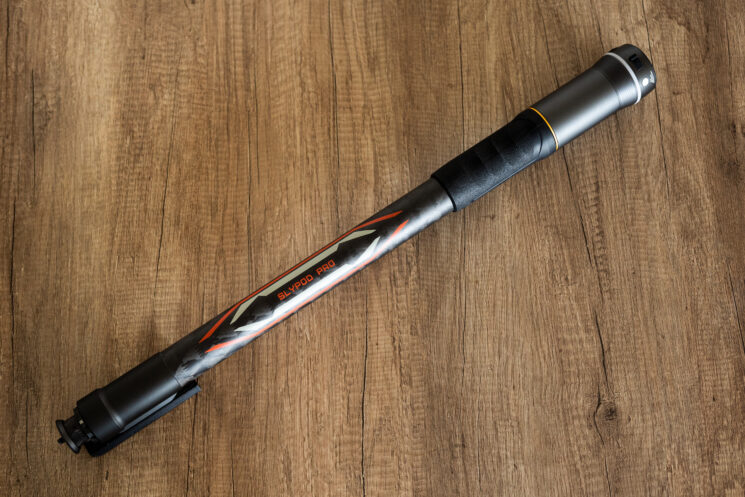 On the tube portion of the Slypod, you have two mounting points. Both of them have two 1/4-20 threads and two 3/8-16 threads (so a total of four). This is perfect, and you will probably end up needing them (more on that later). A nice touch here is that both of these mounting points also act as an Arca Swiss plate. So if you have Arca Swiss compatible heads, the mounting points remove the need for plates. Very cool. 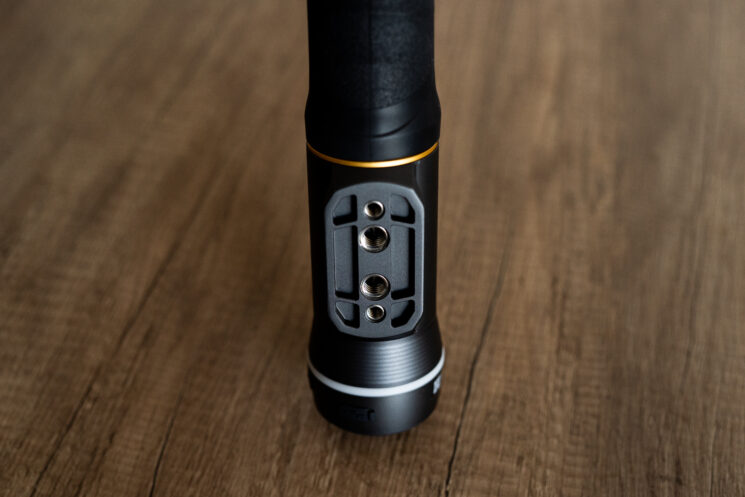 Looking at the legs that come with the Slypod, these are HUGE. Seriously, I have bought probably four or five monopods in my life, and the legs have never been this intense. But still, they’re really light and have some cool features.

First, to fold the legs, they use a straightforward lever. This removes the inconvenience of the dexterity test that some other monopods will put you through. But my favorite thing about the legs is the locking mechanism to go from articulating to stiff. There is a small dial that you turn to release the Monopod and allow it to rotate freely on the ball’s axis. If you spin the dial the other way, the ball will snap into place once the monopod is upright. This does two things for me: One, it obviously gets the monopod standing up straight quickly. But for me, the other nuance is that it will always lock in the same position (100%  vertically aligned). 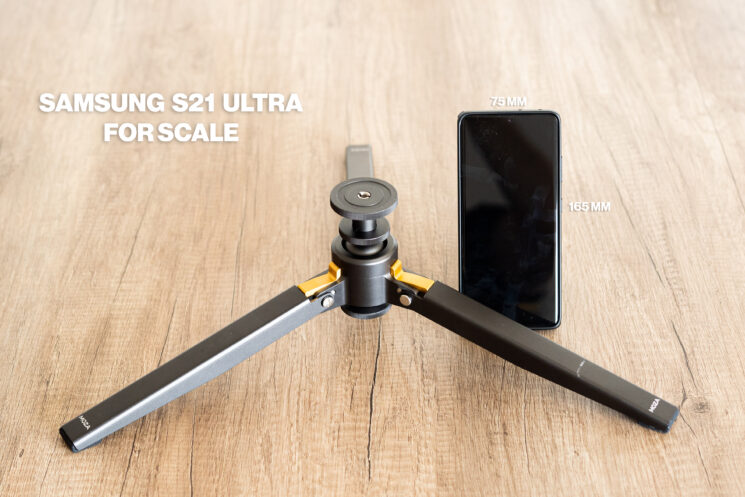 Each of the legs is 23cm long.

The head apparently had some controversy in V1, so this time around, Moza really brought the product together with this piece. It articulates in every direction with very fluid movements. The head also screws in instead of snaps in. 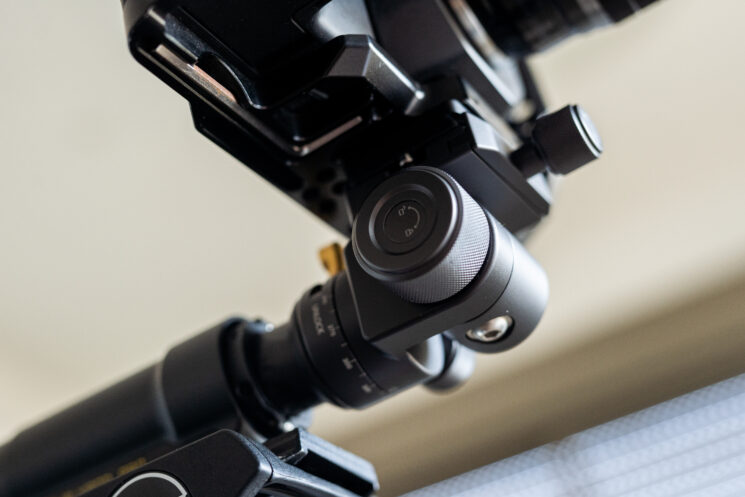 The Slypod Pro has two modes: Monopod and slider. 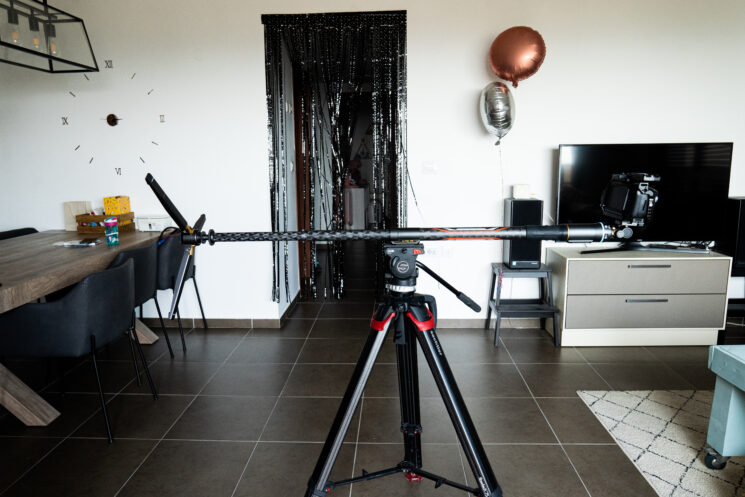 in monopod mode, where the camera is closer to the controls, the legs get the functionality of the slider. 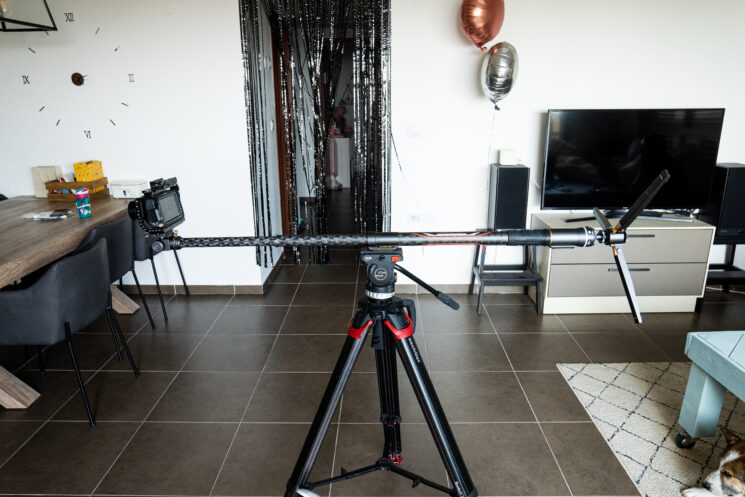 when the camera is in “Slider mode”, the controls are at the base of the monopod and allow the camera to take advantage of the slide

Our Slypod Pro arrived in the Monopod configuration, which means that the articulating head was attached to the control part of the monopod, and the extending tube was mounted to the legs. This means that you can adjust the height of the Slypod on the fly. If you want to turn this bad boy into a slider, you simply need to move the head to the other side, and you now have a slider.

The Slypod pro has had some considerable upgrades, but at first glance, it looks like a downgrade when you see the payload. The Slypod E has a load capacity of 4 kg. That’s double the 2 kg that the Slypod Pro offers. So what gives? It looks like the Slypod Pro opted for more travel and more speed. The Slypod Pro travels significantly faster at 70 mm/s. This means it travels the whole length of the slider in under 8 seconds. The 2 kg limit is in every direction, no matter the orientation.

To sum it up, the Slypod Pro goes faster for more distance. If you’re still wondering why they reduced the payload, it has to do with something called mechanical advantage. Basically, the further a weight gets from the fulcrum (the load-bearing point), the more downward force is applied—more on how this affects you at the end of the article.

There are a lot of doors that open when you take the rail away from a slider. The Slypod Pro is completely different from any other traditional” slider. Here are a couple of fascinating things I found you could do.

You can set up a vertical “pedestal up” (this is the proper term for a camera gaining height). You can do use this type of shot for reveals or even establishing shots. 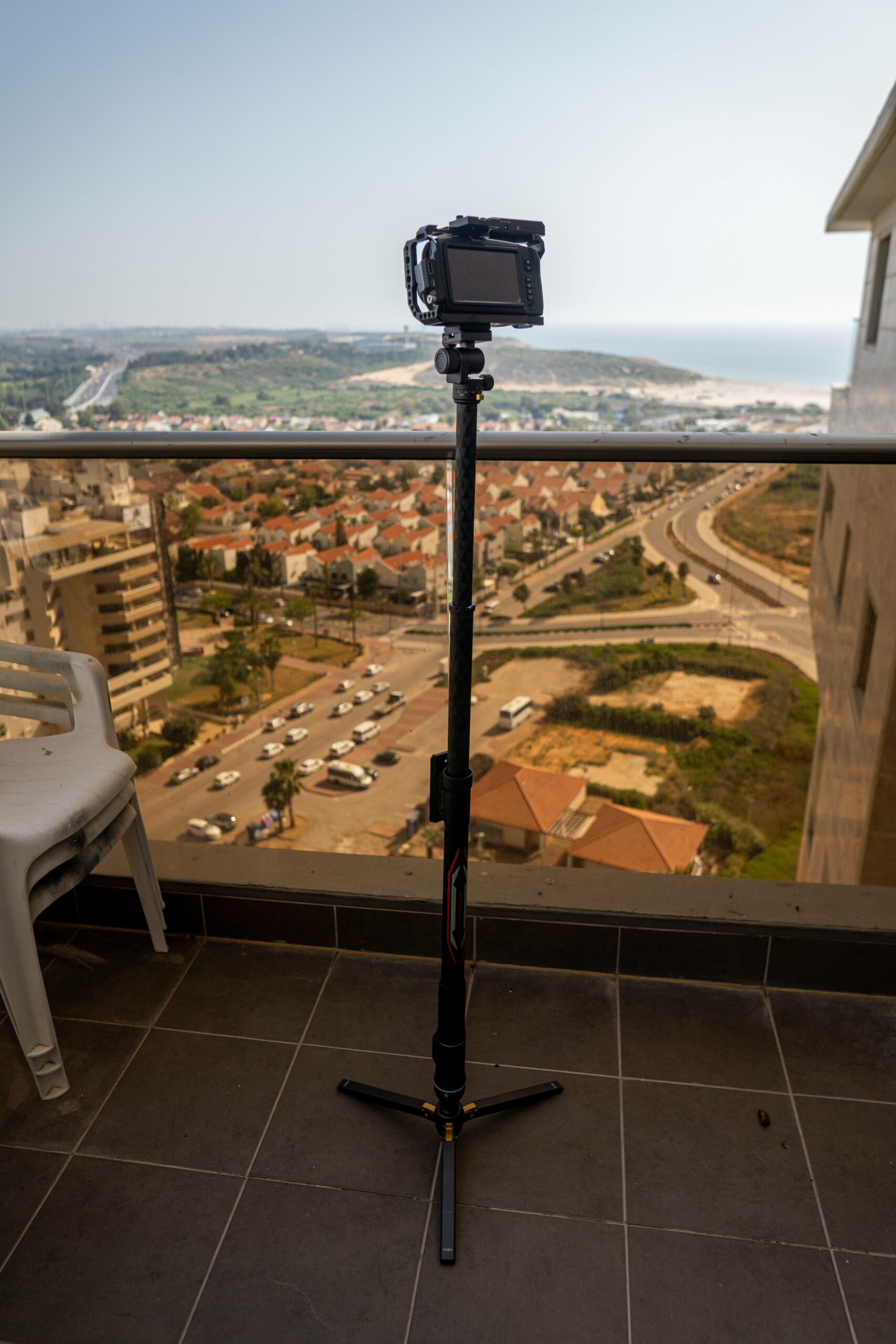 Having no rails under you means you can tilt down to 90 degrees. Or even use it to give a “probe” style effect. 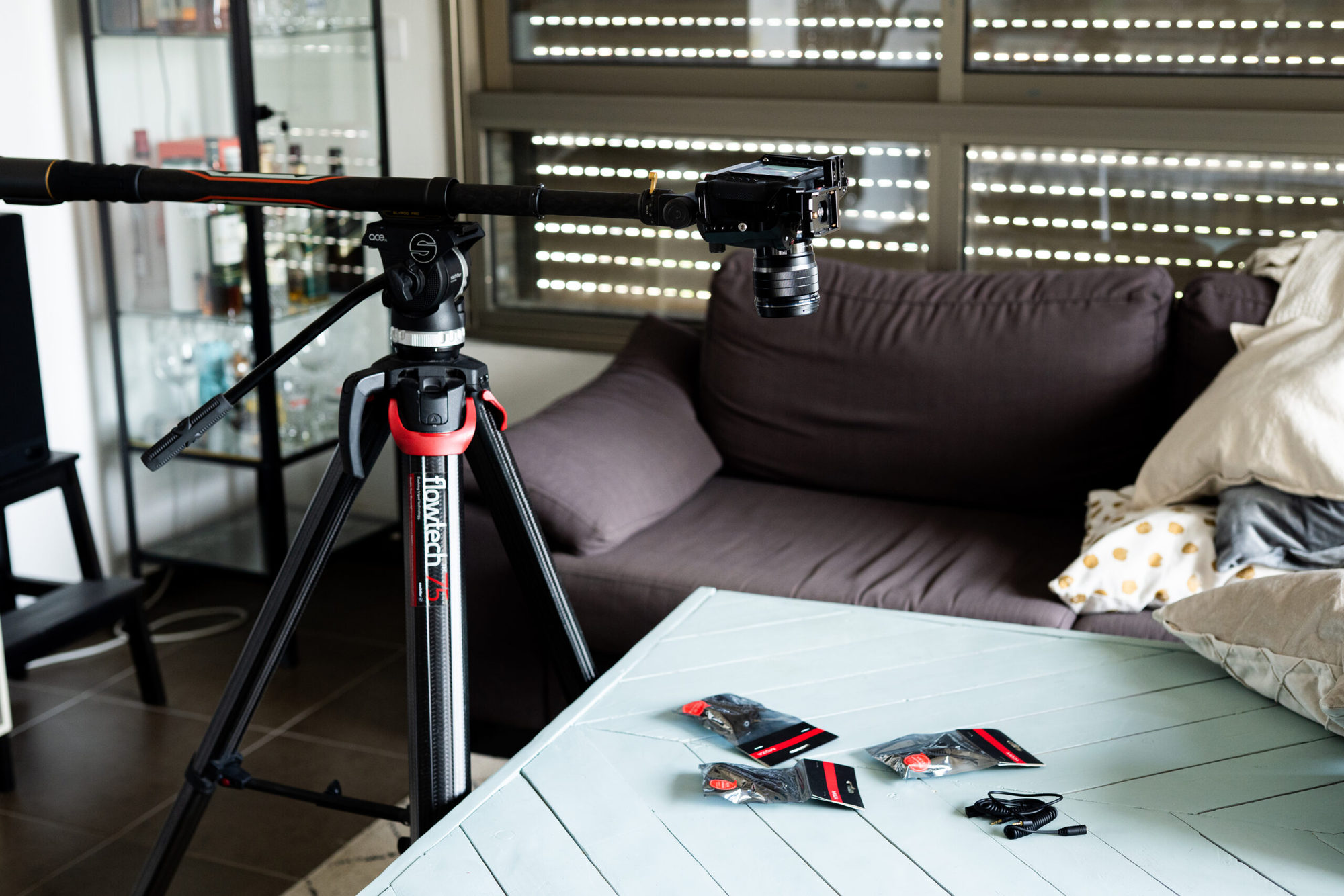 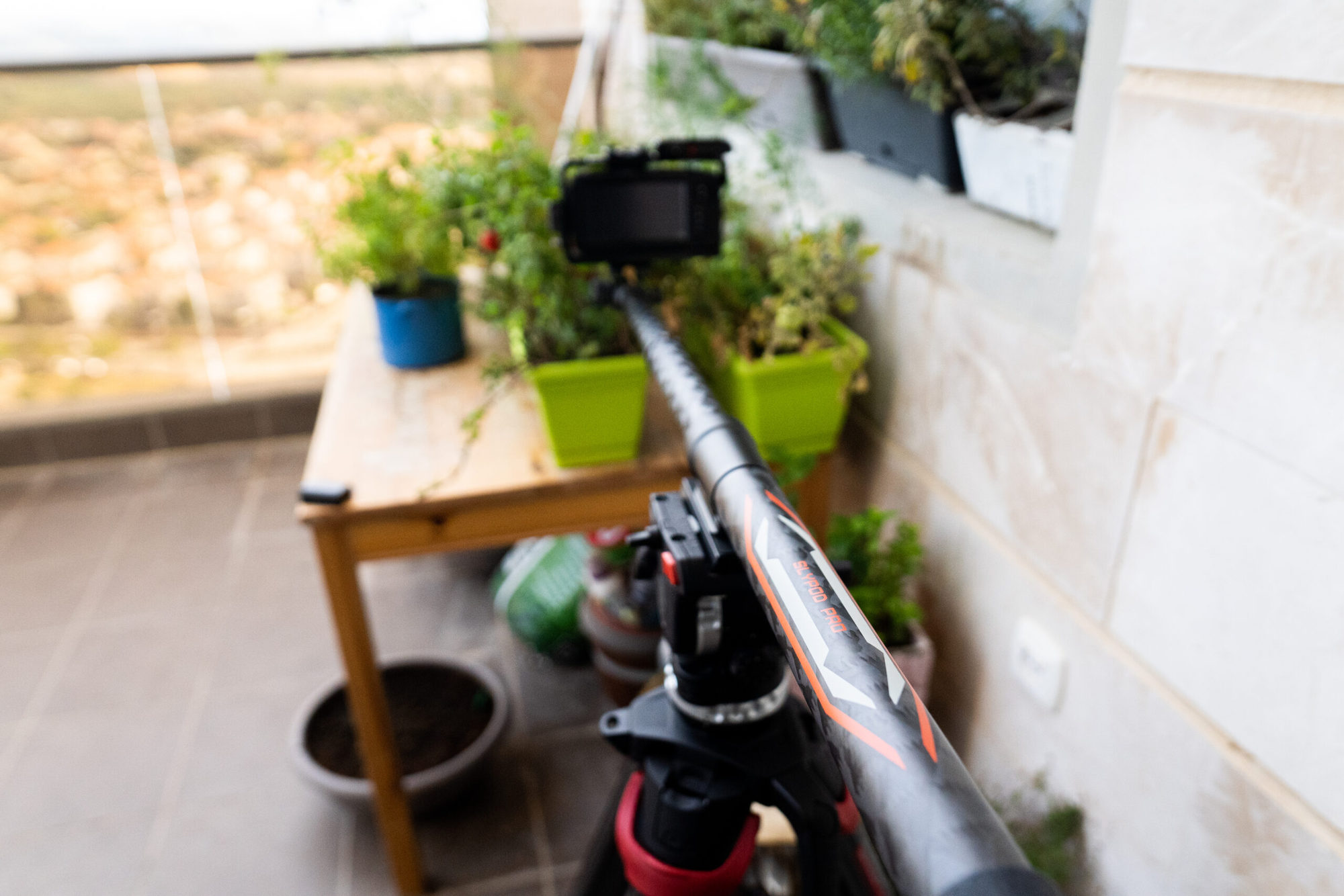 You can also double down and mount the Slypod to a tripod head. While the Slypod is doing its thing, you can operate the tripod to add more depth of motion. 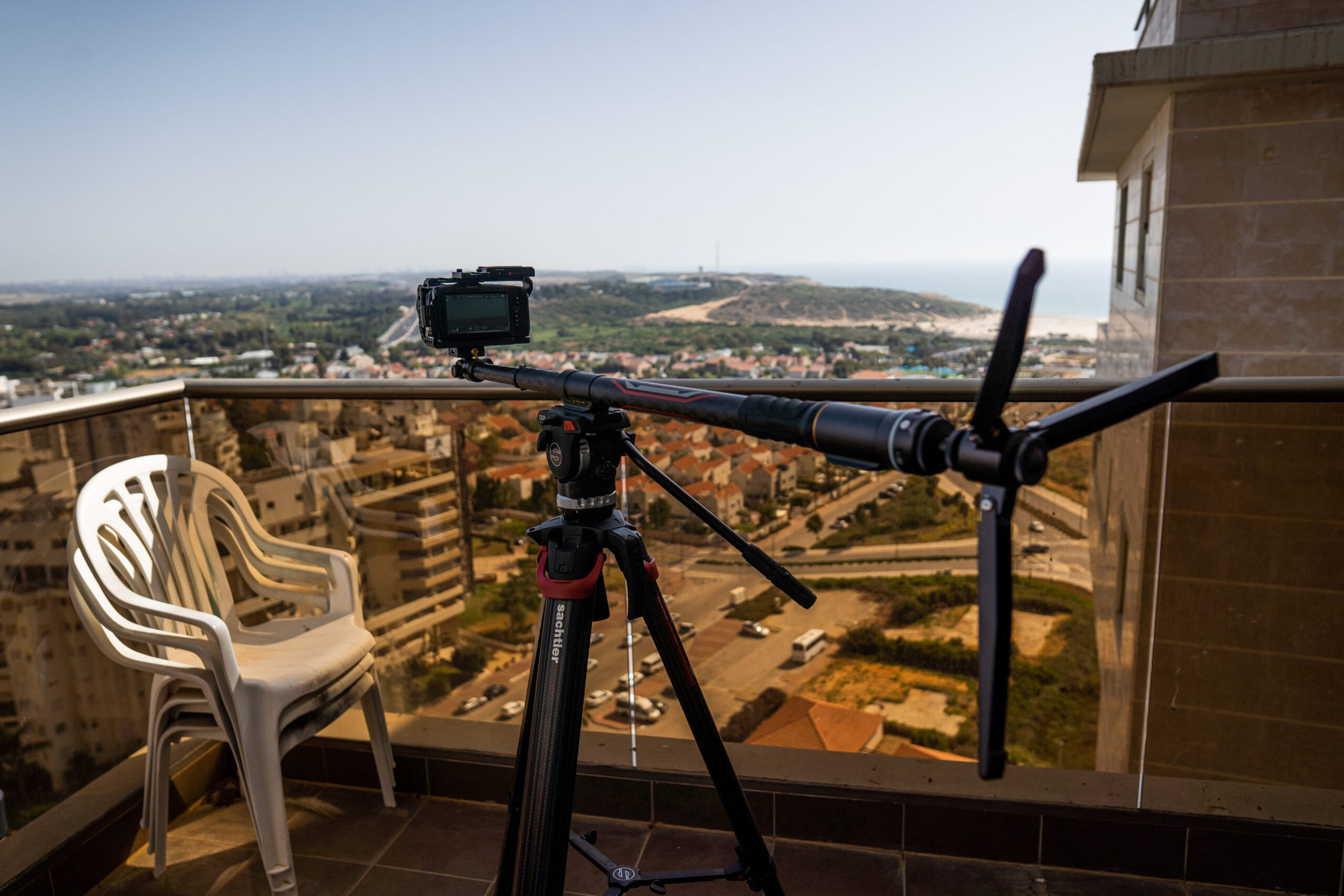 You can control the Slypod in one of two ways: 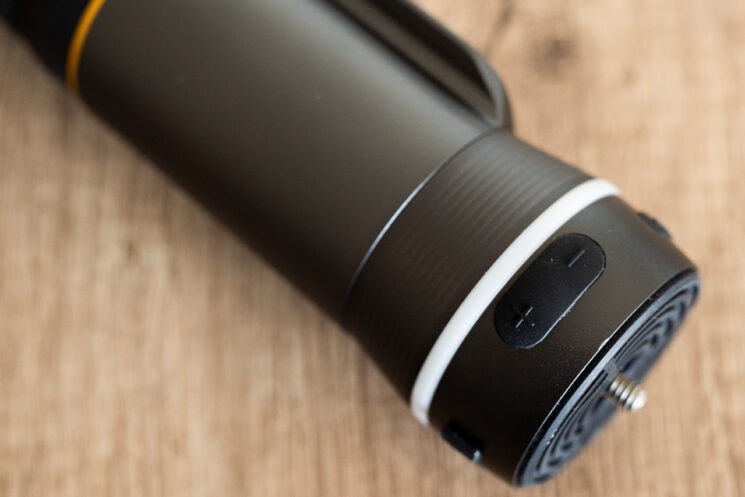 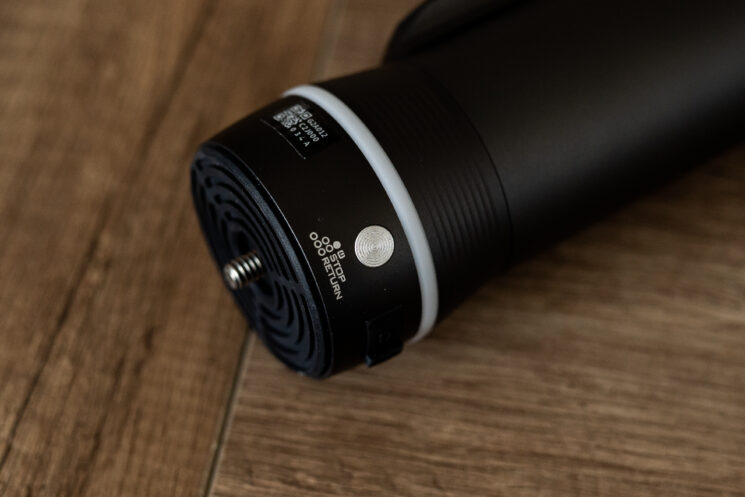 When it comes to sound, the Slypod is by far the loudest slider I’ve ever used. It has a beefy motor, so I totally get it. There is an option in the app to turn on “silent mode,” which, full disclosure, is just a 30 percent power limit, meaning 30 percent the speed. Even in silent mode, the Slypod is still quite audible.

A Word of Caution… kind of

There are some things you need to be careful with this product. Some of it is just “things you should know before buying”.

First, the product seems to be a hybrid for stills and video work, but it seems to be lacking in both. For example. The Monopod functions as a monopod, but it’s quite a short monopod. For me, if the monopod can’t get to eye level, it’s a dealbreaker (at least on the monopod front).

Another example would be the time-lapse function. You can set up time-lapses with the option to move-shoot-move (where the monopod triggers the camera); however, this only works in monopod mode. Meaning, you can only activate time-lapse mode when the camera is on the non-extendable portion of the “slider”. The cables that connect the camera to the Slypod are simply not long enough.

Personally, I would be a little worried about having the port of my A7III with that much tension on the cable. I couldn’t take a picture because it’s not long enough. The included coiled cable is 30cm, and the camera connection cable is another 30. The coiled cable stretches comfortably to about 60cm. After that, it seems like too much tension.

Finally, a word about load capacity: this problem splits into two problems: safety and limitation. As for the weight limitation, we know the Slypod Pro upgraded the distance and speed at the expense of weight. That’s fine; I can live with that. You only realize once you are shooting that you really don’t need to do fast movements. A little goes a long way.

However, this new distance poses a new challenge. 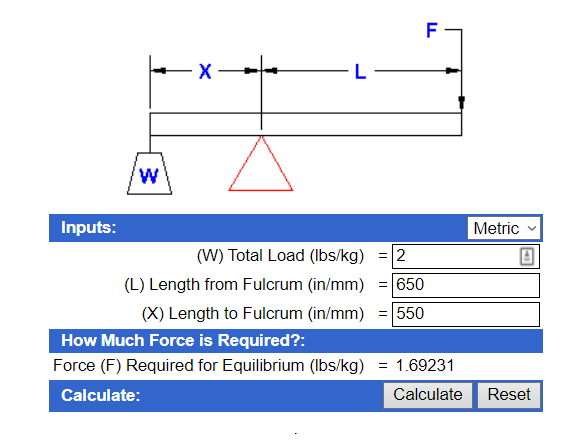 As the payload gets further and further, those 2 kgs loaded at the end of the slider apply a rotational force on the tripod. Even with a Sachtler Flowtech 75 and an ACE XL head, my tripod was toppling over with an A7III in a cage and a Sigma 50mm Art. It would be best to use a second tripod or a counterweight to keep this puppy on the ground. This, assuming you’re using the whole full length. 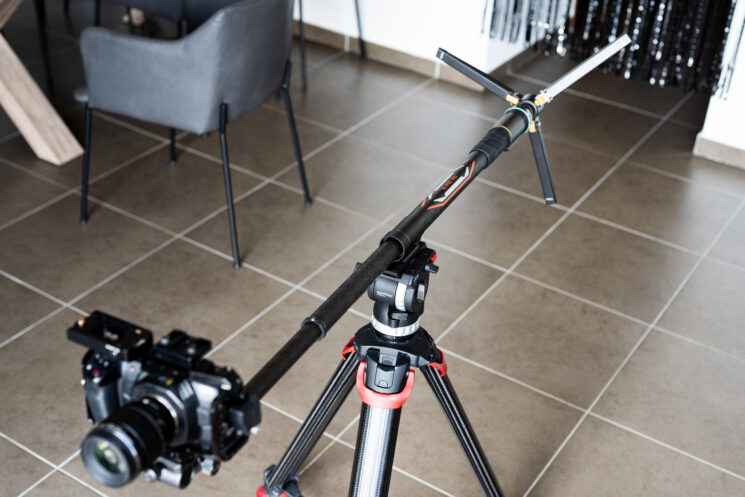 So what is the SlyPod Pro? It’s a half-meter slider and monopod combo. It has a lot of potential. My favorite thing about this is the new angles and uses that the SlyPod enables. It looks like once the Kickstarter campaign ends, the Slypod will go for about 600 USD. I think this slider is perfect for people who have smaller gear. People looking to expand their camera capabilities and looking to get more unique stylized shots. The Slypod offers a lot of versatility and creative options, and it’s available right now on Kickstarter. You can still get it for  17% off (or 23% if you buy a 10 pack)… 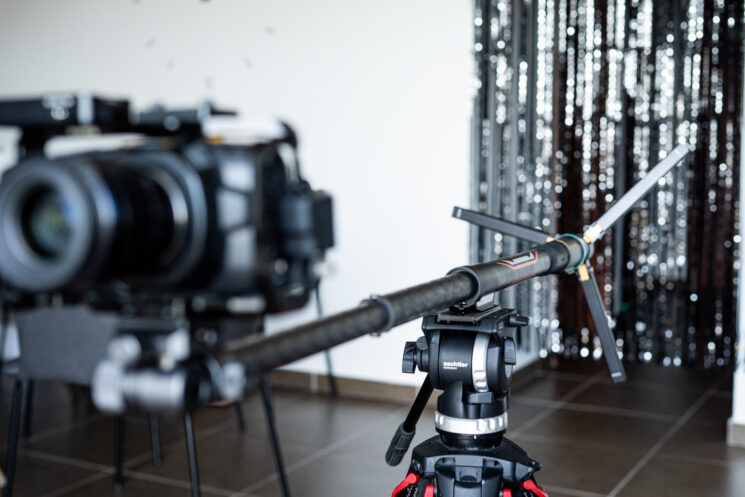 The Steadify claims to replace all your tripods and monopods