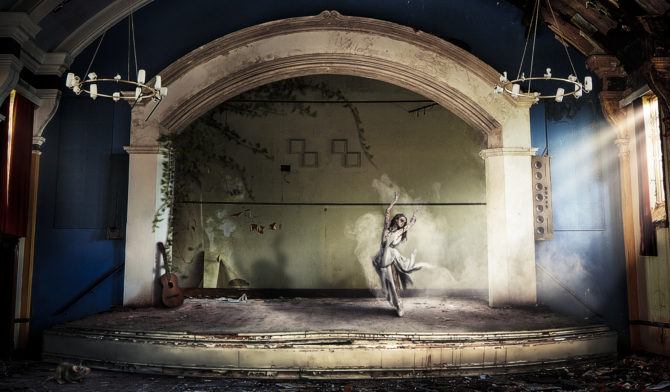 Believe it or not, the photo above is not real, It was composed from several elements, so there was never a dancer that I shot on a dilapidated stage. I only used resources from the IMS mega bundle. In the post below, I am going to break this composite down, step by step and explain how it was made, and why each of the compositing decisions were taken. It is called “Dancing Decay”.

The intention with this composite was to create an atmospheric, creepy and melancholic fantasy image. After gathering the resources I decided on an old, derelict theater, in which a restless ghost of a female dancer is craving for old times, trying to find some last piece of joy in the sunlight on the stage.

I saw some derelict theaters and some stages in my stock portfolio but none had the perspective I wanted to fit the concept. I needed more stage space than any of them offered.  Well, it’s a good thing that I was making a composite and made my own little theater with several stock photos.

The first thing I did was alter the bottom of the left column, I wanted it to look like the right column – not sunk into the floor.

I also applied some tonal corrections and curves on the background to give it more contrast and a sturdier look: 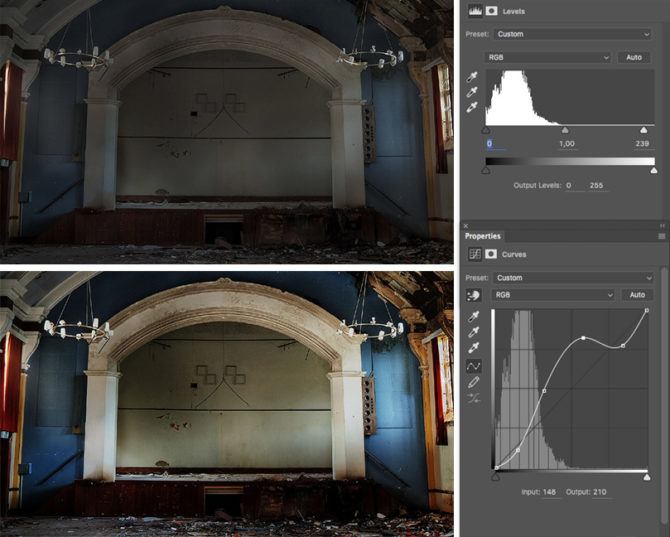 Then I cut the pedestal, from the front part of the stage, and pasted it to the background to have more space in the front area.

then it was time to take care of the floor. I used the Perspective Transform’ tool to pull it in the right perspective – so it fits to the rest of the room. to blend it into the scene I added a curve and some tonal corrections as, and lastly some dodging and burning for the the pedestal, the floor and the rest of the image. Finally I modified the illumination.

2. Details in the background

After I got my front right, it was time to take care of the background. I was not live enough and should be spiced up a little. The hanging chains were completely erased and I added some decayed wall textures layers (it’s very easily done with with ‘Soft Light’ blending mode).

I used this stock image for it… 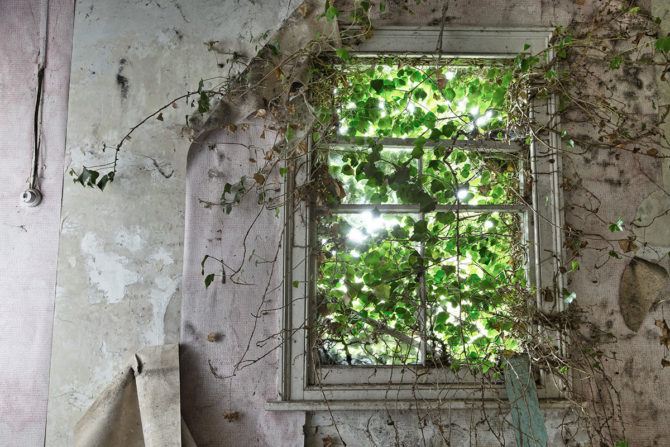 … which made me think about putting some ivy on the wall: 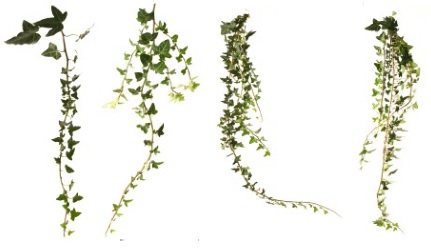 To make the ivy more realistic I created two layers. I roughly knocked out the background of the bottom layer with ‘Select’ -> ‘Color Range’ and set it to ‘Multiply’ blending mode. To get rid of the transparency leftovers, I added a layer with no blending mode and a mask about 2 pixels smaller. That helps avoiding the bright edges.

After that I worked with curves and tonal corrections again. I darkened some ivy leafs because some of them were literally growing in the dark. (bad!). I used a black brush to create the shadows on a new layer, with ‘Soft Light’ blending mode. This was the final touch for the leaves.

Light can really help building up an atmosphere so I added some light beams on the right window. As this place was derelict, I also added some stirred up dust lit but those light rays. Again, this is easy to do: the light beams are just a few light beam layers set to ‘screen’ blending mode. 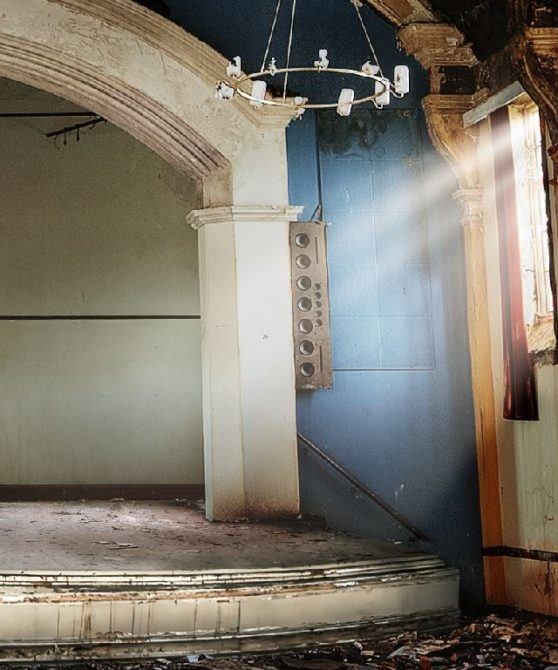 Hint: If the background of some stock it not dark enough you may end up seeing the the edges of the textures layer. The fastest method to correct that is to modify the shadows of the stock image with a gradation curve. 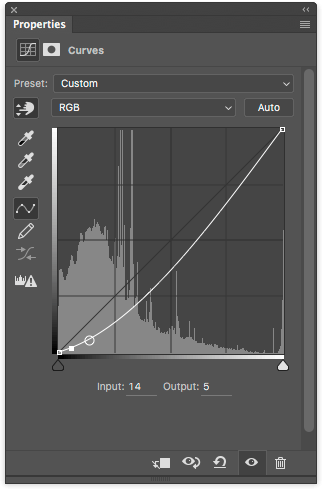 To place the female dancer in a realistic position, I used guides on the horizontal lines of the image. I located those lines by extending the running lines in the background. The point at which the lines converge is the “horizon”. I did the same with the model and made sure the horizons were aligned.  Now I could change the size and the position of the model as long as the horizontal lines kept alignment. 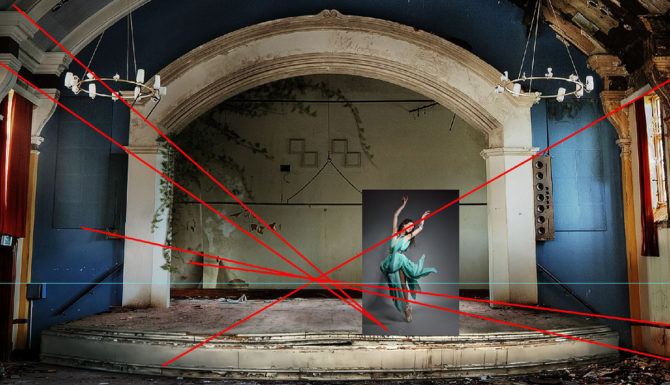 Now the dancer was cropped out of her background and needed to match the scene. Saturation on some color channels was lowered. This was done to give the dancer that ghostly look and to remove some color from the dress so it will be mostly white and gray. I altered the lighting on the dancer with some dodging and burning to match the rest of the lights in the image.

I used tree bark textures in ‘Hard Light’ blending mode to create a brittle, decayed look of skin. I darkened the textures at some points, and modified the hue/saturation of them to fit the skin. I also reduced the opacity until it looked harmonious to me. I darkened the eyes of the girl to add just a nit more creepiness, and the position of the model was slightly altered again.

After being happy with the mode, I needed to create some shadows for her. I added some light and now it needs to make sense with the mode. I made the shadow by copying model layer, colouring it black, and transforming it o it hits the floor. I added some blur to soften the edges of the shadow. The light coming through the window appears pretty angular, and the model is near the wall, so it must be a pretty long shadow falling on the floor and changing as it hits the wall. I didn’t make any calculations here, and went by feel.

Near the model, the shadow is darker and has harder edges. I duplicated the shadow layer and painted some gradients on the layer masks . As you see you don’t have to be very precise – it’s the final result that counts.

The shadow layer is set to the soft light blending mode, with only the shadow touching her feet on the ground was painted with a black brush on a normal layer.

Light and shadow are big thing in composites and in many cases are critical to its  success. We are so trained to see shadows that we immediately detect any deviation from we think should be ‘right’. 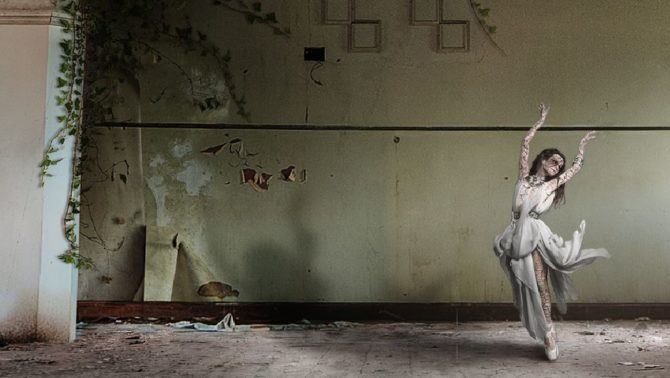 The dust which stirs around the dancer is a layer under the model layer with  ‘Screen’ blending mode – that works awesome with light elements which are photographed in front of a black background! Later I added another dust layer over the model with low opacity and masked parts to create the illusion of flying particles around that girl or maybe that the ghost itself turns into dust.

Fundamentally the image was done, but I had the feeling that something is still missing. A few small details which are needed retain the viewer attention for a few more seconds.

The first idea was to place a broken piano on the stage. But I found nothing with the right perspective (even after distorting and testing, nothing really seems to fit) – so I decided to include an old guitar. I also added a small rat on the left side of the image.

These details were also dodged and burned, tonal corrected and applied with gradation curves. Then added shadows in a similar manner to the dancer.

To close off the image, I added a bit of a yellowish tone in lightroom and bumped the contrast which boosted the colors. 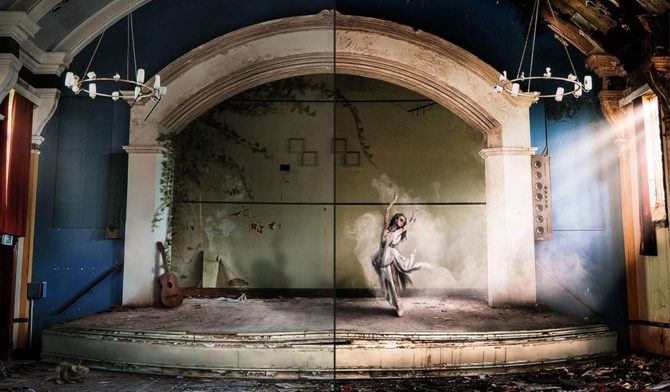 The bright spots on the wall and the wall socket were removed with the healing brush. A dark vignette was added and that is it.

This composite, from idea and research of stock images to complete photo was made in 12 hours spread over three days. About one third of the time was real Photoshop work. I should really brush up on my compositing skills, but I think that a pro with good image in mind would have done it in 2 or 3 hours.

Here is a look on the entire process

A step-by-step guide to using the Waveform Monitor
« Canon DSLR destroyed by Leafcutter ants in overnight wildlife shoot in the Amazon rainforest
Extremely rare unopened military issue Leica KE-7A shows up on eBay for over $45,000 »