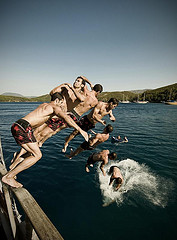 Sometimes the best way to achieve an effect is to do it in post. So this post will not involve any gear hacking (although I can think of some elaborate ways to make this with no post at all), but some good old post processing method.

An action sequence shot as a still image that is made from several frames. In the following tutorial Kaan Kiran demonstrates one method of making such action shot. 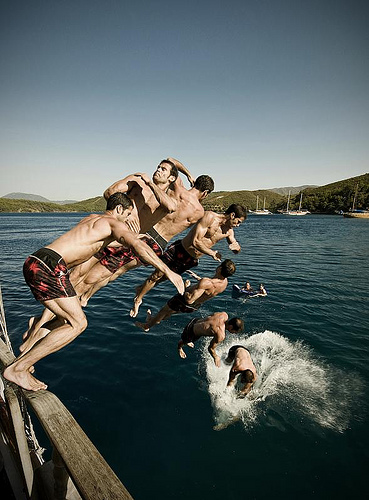 Choosing A Model And An Action Sequence

The guy in the picture is a close friend dancing for the Berlin Opera & Ballet. So he was the right person to shoot a sequence while he was kicking that turn from the boat to the water. In the image below you can see 3 of the 8 consecutive images that composed this sequence shot. 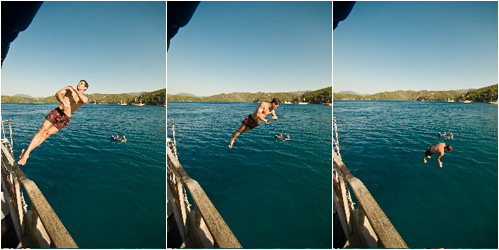 I personally did not like the landing much, but there was much to do about it.

I shot the whole sequence in raw. I must admit that I have just started to shoot Raw after seeing the crazy capabilities it has compared to jpegs. Since this scene is a hard one to reproduce, shooting in raw enable me to make some corrections after in post processing in case I wanted to fine tune white balance or other setting.

I did not use a tripod. Even if I did, it would be totally pointless since I was standing on a rocky boat. But I made sure that my D300 is very still and not shaking a bit. Shutter speed was fast, so I was not worried from camera shake (the shutter speed rule of thumb allows going to 1/30 on the wide side of the lens, but settings were much faster).

There are eight frames in this picture in total. You may count seven, but there is actually a very bottom picture which I used for the background image. I used the pen tool in CS3 to extract the ballet’s figure. Places where the jumper was surrounded by water could be extracted with lots of spare, as it would blend with the water. Places where jumper images overlayed were handled with more care. I then arranged the layers in the correct jumping order. Lastly, I aligned the figures to the background. At this point, my reference point was the line where the land meets the water.

You can see in the image below how stacking the images looks like with out any background. 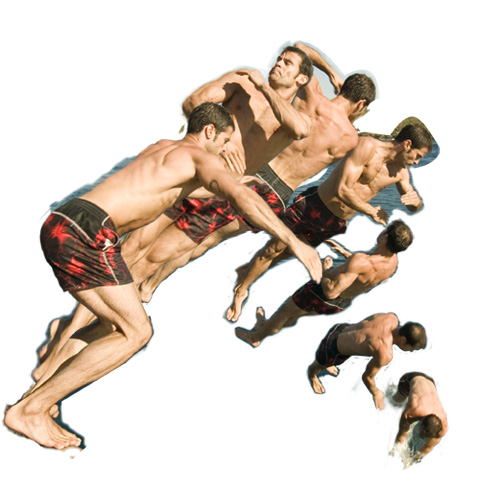 After all layers were in order I used the blur tool in CS3, set the opacity level to 50 and went through all edges of all figures. This will make them blend much easily with the very bottom layer (background).

In the end, I merged all the layers and lowered the saturation a bit and added some vignetting on the edges of the whole frame.

I used a Wacom tablet working on this picture. I highly recommend it.

This article was contributed by Kaan Kiran – If you have not checked his Flickr stream, I encourage you to do so. It has some remarkable images.

How The SNL Title Sequence Was Made? With A Ton Of Creative Camera Use