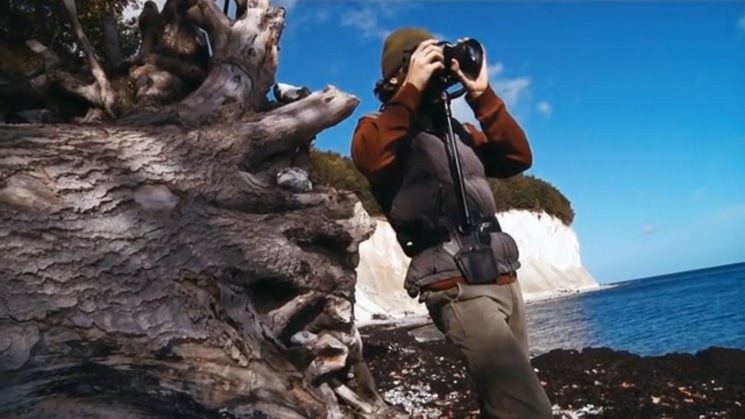 This is an odd one, and I’m curious what you guys think. When I first saw this, I thought “that’s the dumbest thing I’ve ever seen”, but a couple of friends said it looks quite useful to them. The more I thought about it, I could see potential uses. But some of the claims made in the Steadify’s Kickstarter campaign are a little off-base.

The first of those being that it is “the first wearable stabilizer”. You can see what they mean by “wearable stabilizer” from the photo above. But that not really true, as this idea’s been floating around for years (and you can find similar for about a third of that price on eBay).

I’m sure there will be some people for whom this is a useful method of supporting your camera. This is pretty obvious as they’ve already smashed their $30K goal with $105K in pledges. But if anything, it’s an addition to your tripod, monopod, and all the rest of it. It’s just another tool in the arsenal to use when most appropriate. But it certainly can’t replace them.

Tripods on-the-go weigh you down

My most used tripod has been the Manfrotto Element Carbon pretty much since the day I got it. I’ve never really felt that it “weighed me down”. In fact, a couple of times I’ve left the house and then had to check I’d actually put it in my backpack (yes, it fits in a backpack) as it’s so light. So, some tripods might weigh you down, but certainly not all.

And a system like this obviously can’t replace a monopod for things like composites, long exposures, or other situations where keeping the camera in a fixed position is vital.

They’re also claiming this is their “new universal stabiliser”, but it’s been around for at least three years, as their YouTube channel shows – and not for photography. So, it doesn’t really that new to me. They’re just moving a product from one industry to another. And, as I mentioned up top, the idea has been around for a while and already being commercialised by others. 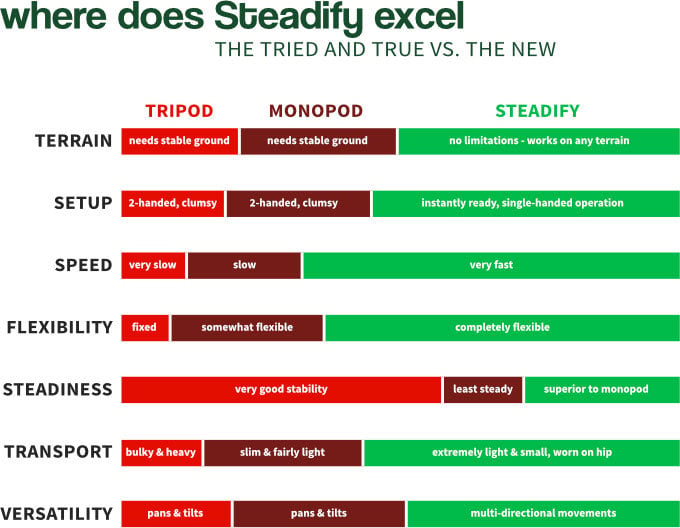 A graphic on the campaign also states that all monopods require two-handed operation and are clumsy. Well, I’ve been using a Manfrotto Neotec 685B monopod for over a decade now. It works just fine one-handed and certainly isn’t “clumsy”. I got it specifically because I needed something that offered a rapid response for photographing birds of prey hunting. It’s worked flawlessly.

It seems that in their comparisons, they’ve taken a very limited view of available tripods and monopods. There are quite a few setups that don’t really fit into their stereotypes for those two categories. The lengths of each segment in the chart above to impress their importance or ability are also quite arbitrary and subjective.

As I said, it doesn’t look completely useless, and I’m sure it has its uses cases. But it’d be better if they marketed it as a new support tool in its own right, rather than an attempt to usurp the two other methods that it definitely cannot replace – at least, it certainly can’t replace them for me. And I really can’t think of any situations I shoot in that a monopod or tripod couldn’t handle where this might save the day.

If you want one, though, their early bird pledges start at only $99 through Kickstarter. But I’d have a look on Amazon & eBay first if I were you.

SwitchPod wants to replace your GorillaPod once and for all