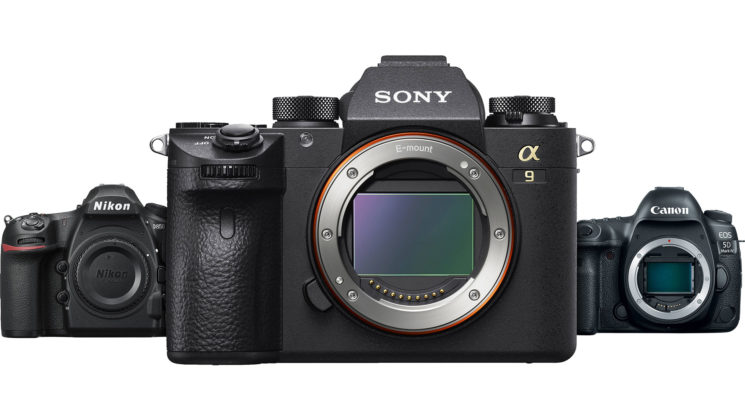 Sony claims that they are now number 1 in full frame interchangeable lens camera sales in the USA, beating out both Nikon and Canon. Sony also says that within just the mirrorless market, they’ve held that top spot in both dollars and units for over 6 years. It seems may be well on track to become the top camera brand they see themselves becoming by 2021. 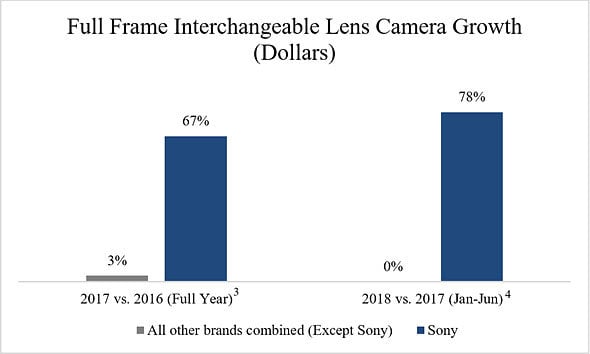 Sony says that 4 out of every 10 full-frame cameras sold during the first half of 2018 were made by Sony. The above graph shows their growth vs the competition.

Sony Electronics, Inc. – a worldwide leader in digital imaging and the world’s largest image sensor manufacturer – today announced that it has overtaken and held the No. 1 overall position in the United States full-frame interchangeable lens camera market in the first half of 2018, in both dollars and units. In fact, four out of every 10 full-frame cameras sold during this time period have come from the Sony brand.

Sony says that this lead in the USA has become possible thanks to sales of the Sony A7III and A7RIII cameras, along with the Sony A9 becoming so popular amongst professional sports photographers and photojournalists.

Sony’s taking this opportunity to launch a new Be Alpha campaign. The initiative begins on August 19th in New York City to mark World Photography Day. It will then see further in-person events in a number of major cities.

The Be Alpha campaign also includes a new “Alpha Female” programme to address “the imaging industry’s well-documented diversity challenges”. The programme will also include a variety of grants and mentorship opportunities for female photographers and videographers

It was in April last year that Sony announced that they’d overtaken Nikon in full frame camera sales. Now they’ve beaten Canon, too. Whether or not they can keep this up remains to be seen. Despite their success, Sony is still the relatively new kid on the block.

Nikon’s new full frame mirrorless camera (maybe two) are set to be announced in just a week’s time. Canon is also expected to make their own full frame announcement fairly soon, too.

Hopefully, at least one of the other two big players will be able to give Sony a good run for their money. Because no matter what brand you shoot, when the kids are the top are fighting for supremacy, it usually means all of the brands see at least some improvement. I did say usually. We won’t mention the Canon 6D Mark II or Nikon’s 1 series.

Given that many photographers already own Nikon & Canon gear, their customers don’t really need to keep buying new ones. That’s just the way things work. When everybody has what you need then sales wind down. I am curious, although it’s impossible to know, what share of those sales are new people buying their first camera, and who was upgrading or switching from another system.

I have no plans or desire to switch to Sony. I’ll keep using my Nikon kit until it dies. And Blackmagic will be the cameras I use for video – once the BMPCC4K becomes available. But it would be nice if, in a few years when my gear does need replacing, Sony isn’t the only viable option.

At least there might be a lot of D500 and D850 bodies in the used market by then. I could live with that.