Today Sony has made an announcement about the increase in sales in the full-frame camera market. Thanks to this increase, they have beaten Nikon and now take the second overall position in the U.S., right after Canon.

The results of the research by NPD Group’s Retail Tracking Service show the growth in sales of Sony cameras, and the overall growth in the full-frame camera market thanks to Sony. 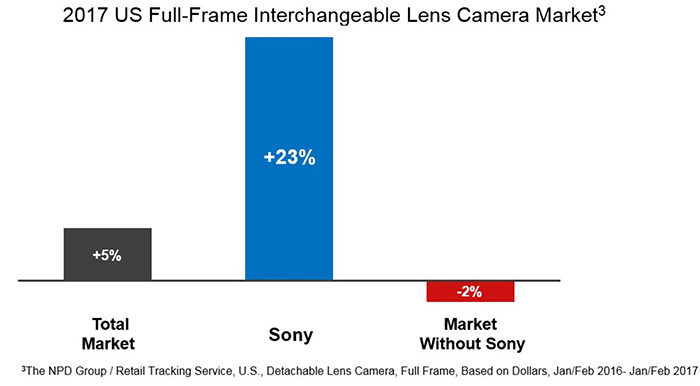 Sony says that in just the first two months of 2017, their interchangeable lens cameras and lenses have seen record sales internationally, especially in the U.S. According to the official press release, the key models for such success are the popular α7RII and α7SII:

Sony Electronics – a worldwide leader in digital imaging and the world’s largest image sensor manufacturer, has announced today that their continued growth has vaulted them into the #2 overall position in the U.S. full-frame interchangeable lens camera market.

Sony’s interchangeable lens cameras and lenses have seen record sales in 2017, in particular within the U.S. full-frame camera market, where they have experienced double-digit growth (+23%) compared to the same period last year. The popularity of key models including α7R II and α7S II has been paramount to this success.

Additionally, Sony’s rapid growth has helped to drive growth of the overall full-frame interchangeable lens camera market compared to the same period last year. Without Sony’s contributions, the full-frame market would be facing a slight decline.

This data from Sony might be a warning sign for Nikon to finally do something about their mirrorless line. They have announced that a part of their plan for the future is focusing on mirrorless cameras, so we’ll see can they beat Sony again. But at least Canon is safe in the first place. For now.