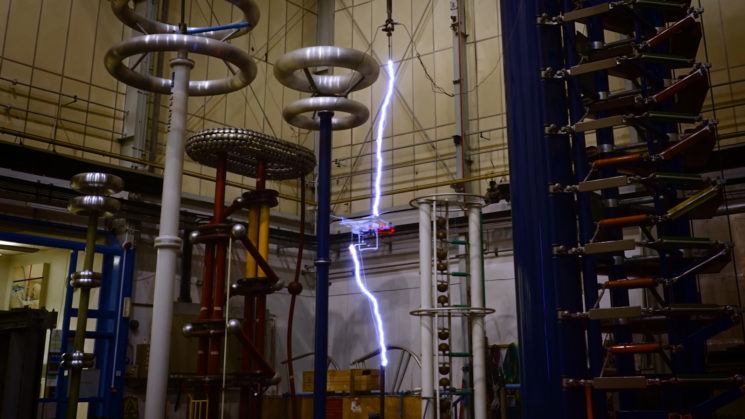 Chances are, if there’s thunder and lightning happening, it’s usually raining, too. Drones generally don’t mix well with water. So, flying your drone probably isn’t going to be on your list of priorities. But, it’s been known to happen. Storm chasers, and those trying to get some insane weather footage will take the risk.

But what would happen if your drone was struck by lightning? Well, YouTuber Tom Scott went to visit the University of Manchester’s High Voltage Laboratory to find out. They flew a couple of DJI Phantom 3 drones in the lab, and put 1.4 million volts through them. The results were interesting, to say the least, if not particularly surprising.

The first test was a straight up, stock DJI Phantom 3, flown in the path of where the “lightning” would strike. The lightning appears to strike one of the propellers, and then exit to the ground through the corner of its legs.

Despite being plastic, the sharp point at the corner of the leg meant that it had a high electric field. This is why it acted as an exit point, according to Dr. Vidyadhar Peesapati, Knowledge Transfer Fellow at the University of Manchester.

Not surprisingly, the strike fries the motors and electronics. Although, the drone didn’t succumb to Dr Preesapati’s prediction and explode. What was surprising was that the battery seemed to survive just fine. Encased in its housing, which acts like a Faraday cage, it remained safe from the effects of 1.4 million volts.

Fortunately, Tom took a second Phantom 3 along with him to perform a second experiment. This time, they used a piece of metal tape to see if they could attract the lightning strike. The goal was to have the current flow down the tape instead of through the drone.

This time, the results were slightly different, but mostly the same. Two of the propellers went flying off, so the drone still fell straight to the ground, although remained on its feet. But, it completely missed their makeshift lightning rod, and still struck the propeller. 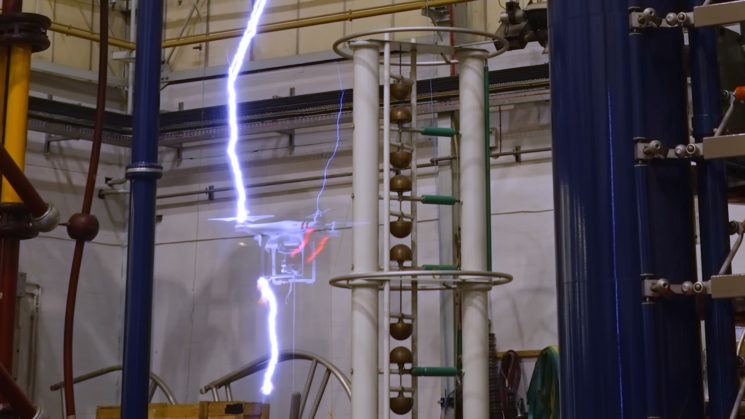 It could simply be that their rod didn’t stick up high enough above the drone to make a difference. Dr. Preesapati’s suggestion was simply that “lightning can be unpredictable”, even under lab conditions. This time, in the slow motion, you can actually see embers flying off the burned out motor.

Or, do if you happen to have a spare one and want to risk it.

« Are there really only two types of photographers?
Sony beats Nikon in full-frame camera sales in the U.S. »