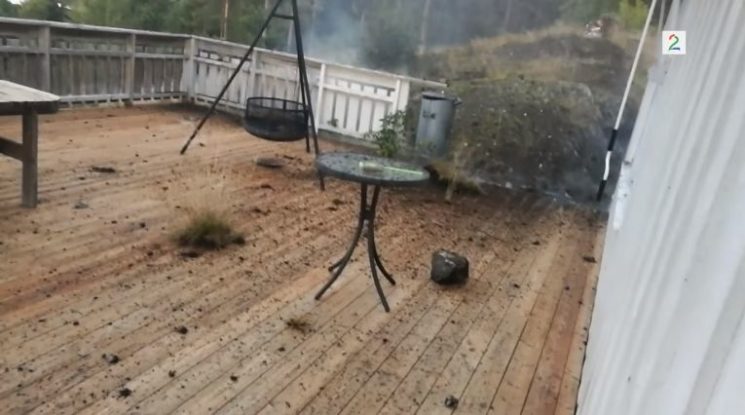 Shooting storms is an incredible experience, and many of us are attracted to it. Daniel Modøl from Norway was filming a heavy thunderstorm from his deck – when suddenly a lightning struck incredibly near him. It destroyed a part of his backyard and deck, missing the man for only a couple of meters.

In the video, you can see two lightning bolts striking before the one that hit the backyard. By observing them, it seems like the storm is approaching the house. Daniel didn’t get to film the strike itself, but you can hear the loud noise, after which he filmed the consequences. A portion of his backyard and deck were scorched.

As Daniel told TV2, there was also some damage inside, and his modem was fried. I got chills only by watching the video, and I imagined his fear. However, Daniel told TV2 that he was pretty calm. Indeed, you can see in the video that he just casually goes inside after the lightning destroyed his deck and almost hit him. I wish I was that calm.

Fortunately, Daniel wasn’t hurt. And despite the calmness – I’m sure he realizes he’s the luckiest man on Earth.

[Man films lightning that strikes 5 metres away, destroying his backyard via Gizmodo]

Photographer shares how he took this impressive lightning storm photo