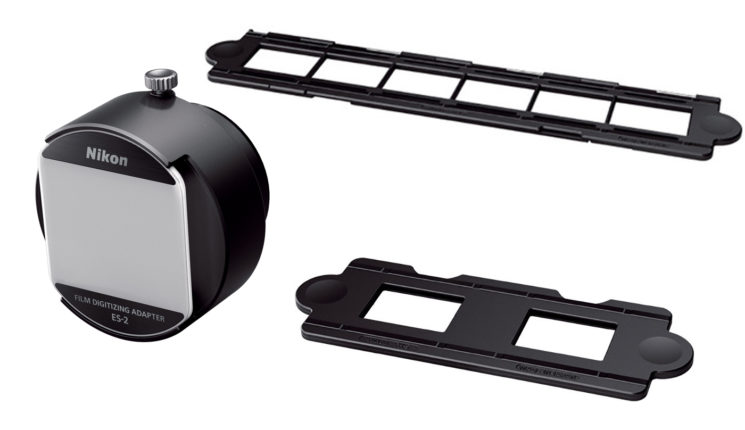 Nikon D850 was officially announced yesterday, and we went through all of its features. The camera undoubtedly thrilled many digital photographers, but there’s another useful feature occasional film photographers will find useful.

With the optional ES-2 film digitizing adapter, Nikon D850 doubles as a 45.7 MP film scanner. You can use it for both 35mm negatives and slides, and take advantage of the high pixel count on the latest Nikon’s DSLR.

This adapter is designed to be fitted in front of the lens. It holds the film at the minimum focusing distance of the lens to ensure critical sharpness. Nikon recommends using it with macro lenses, such as AF-S Micro NIKKOR 60mm f/2.8G ED. For scanning negative strips, you need the FH-4 strip film holder with the ES-2 adapter. For scanning slides, use the FH-5 slide mount holder.

If you plan to buy the Nikon D850, you may find this useful for scanning your 35mm negatives. It seems like a good solution for those who still grab their film camera sometimes, but it can also come in handy if you want to scan the negatives from the pre-digital era. It’s also worth noting that the adapter is suitable for any other camera, even though it was designed with D850 in mind. The reason it’s particularly suitable for the D850 is the camera’s dedicated Negative Digitizer mode. It can automatically reverse colors in-camera to make the digitizing process faster.

The ES-2 is available for preorders, along with the FH-4 Strip Film Holder and FH-5 Slide Mount Holder. You can get them separately, but the film scanning set includes all three and costs $140.