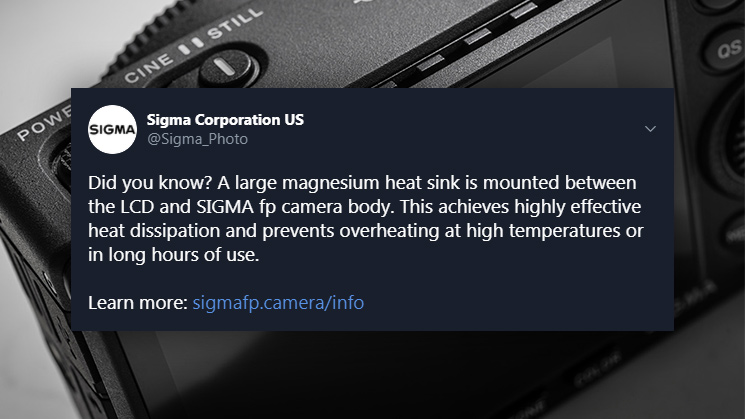 Canon’s taken quite a bit of flack around the overheating issues of the EOS R5 and EOS R6 mirrorless cameras. Canon has announced new firmware for the EOS R5 which extends the recording time a little, although it’s not going to make much practical difference to many would-be Canon filmmakers.

It’s not often, though, that we see a company making a subtle little dig at a competitor for issues with their gear, though. Sigma posted a tweet that, while it doesn’t specifically call out Canon or the EOS R5 does have a rather obvious intent, extolling the not-overheating benefits of a big heatsink in the Sigma fp.

Did you know? A large magnesium heat sink is mounted between the LCD and SIGMA fp camera body. This achieves highly effective heat dissipation and prevents overheating at high temperatures or in long hours of use.

Did you know? A large magnesium heat sink is mounted between the LCD and SIGMA fp camera body. This achieves highly effective heat dissipation and prevents overheating at high temperatures or in long hours of use.

We can’t blame them really. While their Tweet might appear to be an obvious dig to most of us, “not overheating” does seem to be an actual selling point for small form factor mirrorless cameras that shoot video these days. Sony’s been plagued by overheating issues for years, although they have mostly cleared up these days. Now the Canon EOS R5 is suffering from them in a pretty major and public way.

Sure, the Sigma fp can’t shoot 8K like the Canon EOS R5, nor can it do 4K 120fps like the Sony A7S III, but it can shoot internal Cinema DNG RAW video, with a full-frame sensor for a very long time. And it also puts out RAW over HDMI for recording to ProRes RAW on the Atomos Ninja V or Blackmagic BRAW on the Video Assist 12G.

It’s an impressive little camera for what it costs.