Well, we were all waiting for the other shoe to drop on the Canon EOS R5. 8K RAW video for under $4,000? There had to be a catch, right? Well, it looks like, yeah, there probably is. According to Canon’s documentation for the EOS R5, it’s potentially going to suffer from some pretty drastic overheating issues, even when shooting 4K.

In this video, Max Yuryev goes over the video recording specs in the Canon documentation and calls out Canon and EOS R5 reviewers for not bringing this to more peoples attention during all the announcements and talk yesterday about the new camera. And it looks like it’ll be even worse than the overheating issues Sony used to suffer from.

On first glance, the EOS R5 sounds like a pretty awesome camera for video shooters. 8K RAW, 10-Bit 4K 120fps? What’s not to love? Well, it seems the overheating issues are what’s not to love. When shooting 8K video in either RAW or HEVC (H.265) you’ll only get 20 minutes of recording before shutting off. At 4K60, you’ll get around 35 minutes.

This possibly wouldn’t be so bad if you could just wait a few minutes, let it cool down some, and then get another 20/35 minutes. But the problem is, the cooldown times really aren’t that great, either. According to the information, after shooting 8K video for 20 minutes, if you leave it to cool down for 10 minutes, you only get a further 3 minutes of record time before it overheats again. 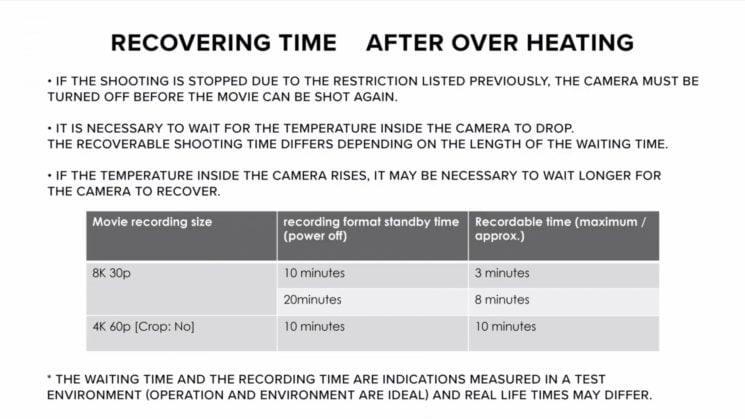 Even leaving it to do nothing for 20 minutes only offers you 8 minutes of record time before it overheats again. So, even if you’ve got two bodies, you can’t just keep swapping them in and out every 20 minutes. You’re still going to have a fair amount of downtime when both are simultaneously waiting to cool down.

If your shoots are more scripted, narrative, 30-60 second long clips that you’ll cut down and edit together to create something a little more cinematic, then you’ll probably be ok. But if you’re a wedding or even shooter, even if you’re not planning to shoot 8K, but only 4K, you’re still going to potentially face some issues.

And these times are at fairly low ambient temps measured in a controlled test environment. If you’re outdoors in 90°F sunshine, your EOS R5’s going to heat up even faster and be out of commission for longer during a video shoot.

At the moment, these numbers are all theoretical until somebody who actually has one in their hands can show us exactly when it overheats at each of the different resolutions in different ambient temperatures – and I’ve no doubt somebody will do that as soon as they start shipping out to people. Max has already pre-ordered himself an EOS R5, so if nobody beats him to it, then chances are he’ll do that test for himself and record it for the rest of us to see.

Will you buy the Canon EOS R5? Did you pre-order already?