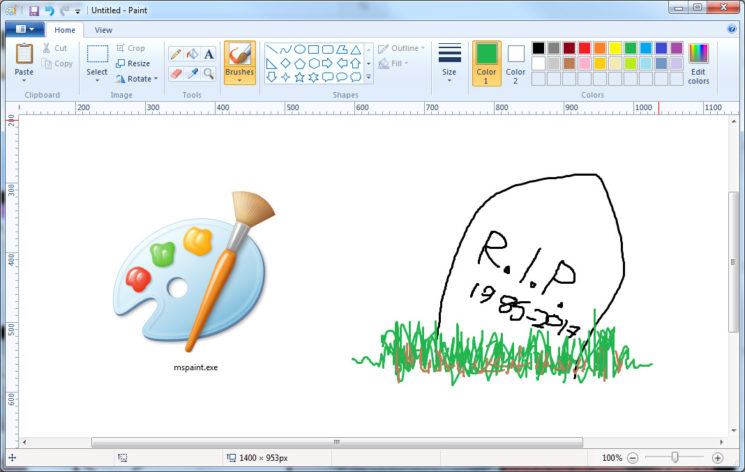 A part of my childhood just died. Microsoft Paint was never the pinnacle of photo editing software. But there was a time when it was the most popular image application out there (because it’s all that most of us had access to). It’s the first form of painting or editing application many of us experienced when we first acquire a Windows PC. It certainly was for me.

This venerable application, though, is facing its end. The next Windows 10 Fall Creators Update sends Microsoft Paint into the “deprecated” category. While it doesn’t yet share the same “Removed” category as other long standing applications such as Outlook Express, it does mean no more updates.

While it was never really taken as any kind of serious application, it’s been there so long that it’s practically part of the Windows furniture. And I’ll be sad to see it gone, despite the fact that the first time I’ve loaded Paint in the last 10 years was to make the image at the top of this post.

Paint never really stood a chance against applications like Photoshop or Affinity Photo. That being said, there are those out there who regularly use MS Paint for their editing needs. It has picked up quite a legion of dedicated fans over the years.

We even featured a popular viral video here on DIYP a couple of years ago with Visual Effects created using Microsoft Paint. That video had a lot of people fooled, and there are even a few tutorials on YouTube showing various techniques.

Although Paint has advanced over the years, it was never very extensive. And that was part of its charm. It was a good, fun, simple application. A great introduction to drawing on a computer for kids and adults alike. It is a shame to see that it’s on its way out.

There’s been no word yet on exactly when Microsoft Paint will be completely removed, but its days are most definitely numbered.

Goodbye, Microsoft Paint. It was fun while it lasted. Say hi to Clippy for us!

As you may have heard, Windows are planning to axe Microsoft Paint from their next Windows 10 update. While this is a…

Microsoft decides to save Paint after the reactions of public

« I almost got killed because of street photography – it’s not worth it
Instagram ruins self-confidence and mental health in teenagers, study finds »