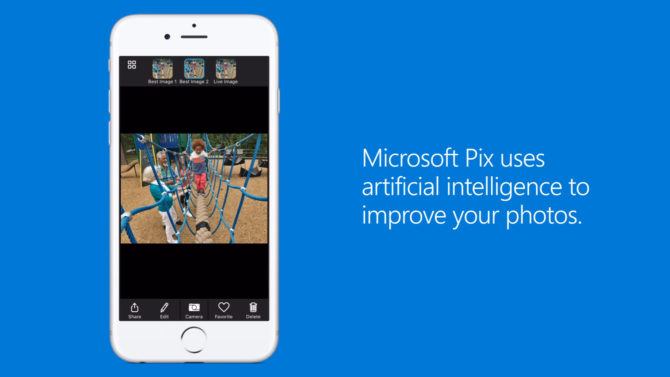 The promotional video for Microsoft’s new Pix app is very impressive. Sure, sometimes you want to get as much control as you can, so you fire up Camera+ or 645 Pro. Sometimes, though, you just want to bring up the app and grab a half decent snap.

Now, Microsoft have now launched Pix, a camera application that takes all the pain out of pointing & shooting with the iPhone. Sadly, there’s no Android version yet, and surprisingly no version for Windows Mobile, either.

Facial recognition isn’t really anything new. We’ve seen it added to DSLRs and camera apps for a while now. Typically facial recognition autofocuses on your subject. Sometimes it waits for what it thinks is a smile to take the best shot.

Pix takes it a step further by using the information to determine your exposure, and automatically correct lighting inconsistencies between multiple faces. Very handy for those family gatherings and days (or nights) out with friends.

The app also makes a very interesting use of the iPhone’s “Live Photos” by examining each of the images to determine the best shots. If somebody blinked it discards them, if a frame is blurry, it gets rid of that, too. It presents you with either the best shot from the set, or several options for you to choose from yourself.

After having a quick play with it, it works pretty well, too. It also seems to do a rather good job of cleaning up noise in low lit conditions.

It also appears that the app is capable of producing cinemagraphs. Using the frames captured in the Live Photo recording, it is able to create a cinemagraph animating elements of the frame.

What’s particularly interesting to me, though isn’t mentioned in the video, is Pix’s hyperlapse feature. Microsoft’s Hyperlapse technology has been available to Android and Windows Mobile for a while now. It’s a standalone app, and it’s also available for the desktop on both Windows and Mac.

Now, hyperlapse finally comes to the iPhone integrated into Pix and it’s extremely good. From time to time, I’ve played with Instagram’s Hyperlapse app, and while it’s not terrible, it still has the occasional issue. The footage isn’t always as clean as I’d like it. Maybe the app’s not that great, or maybe I’m just too picky.

In my short tests with Pix, though, the hyperlapse results have been silky smooth. It’s now something I’ll be playing with a lot more often when shooting on location.

As mentioned, Pix is available for iOS but not Android or Windows Mobile. It is surprising that they would take on Apple’s camera app on their own platform, but not release a version for Windows Mobile. Still, you can download the iOS version in the App Store now.

No word yet when, or even if, it will one day be available for Android or Windows Mobile, but if it does, we’ll let you know.

Have you tried it out yet? Has it worked as well as you’d hoped? Or have you already found where it’s lacking? Let us know in the comments.