One would think that a lens hood is a simple and straightforward sort of thing. We’ve all got them for our various lenses to help prevent the sun from flaring into the front element. But flare isn’t the only thing that lens hoods can be good for, as The Ultimate Lens Hood is out to prove.

The Ultimate Lens Hood (we’ll call it ULH from now on) is basically a black stretchy silicone cone that goes over the end of your lens. It serves the purpose of a regular lens hood (to a degree), but also allows you to eliminate unwanted reflections, and protect your gear from the elements.

It’s being funded through Kickstarter and has a rather modest goal of £8,000. It’s only a couple of days in so far and it’s already over halfway there. I’m dubious of many Kickstarter campaigns these days, but this one looks like it’ll be a pretty safe bet. It’s an inexpensive item that’s priced realistically and it’s probably not that difficult to manufacture (and they already have the tooling). This is basically just a pre-order phase.

The ULH comes in two sizes. There’s the regular sized ULH, designed for typical DSLR & larger mirrorless lenses with a diameter of 60mm or larger. In the video above, they show it stretching over the 115mm diameter Canon 100-400mm with no issue.

The other size is the ULH Mini designed for smaller mirrorless lenses, phone lenses like Moment and ExoLens.

Its primary function is to act as a way to shoot against glass while eliminating reflections. This allows you to get the camera up to a window to shoot outside without seeing everything inside the room.

It’s similar in function to the Lenskirt, but with one big difference. The ULH attaches to your lens, not the window, allowing you to be mobile, and easily shoot handheld against the glass. Very handy if you’re photographing scrub pythons or water monitors at the local zoo. 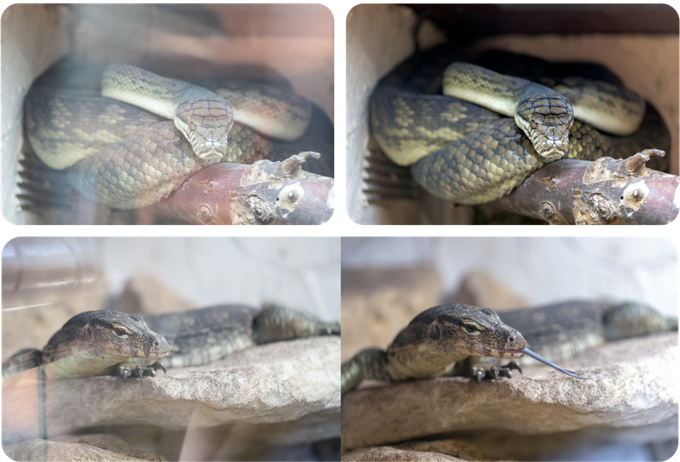 But that’s not its only function. Because it’s made from silicone, it can be bent, pushed, pulled and twisted. If you mount it on backwards, it can work to act as protection for your camera against the elements. And with certain brands, you need all the help you can get if you want to shoot when it rains.

It’s one of those items that I think only a handful of people will ever actually use regularly. But it’s such a super useful and inexpensive tool that everybody should probably have something like this in their bags for those times they face a problem that it can solve. Yeah, I think I’ll have to put a couple of these on my list.

As mentioned, there are two sizes; The ULH and ULH Mini, priced at £30 and £20 respectively. For early birds, there’s a £5 discount on each. It’s £45 if you want to get one of each, and £56 for two of the large ones. (never mind, it’s £5 flat-rate to wherever!). If you want to pre-order yours, head on over to their Kickstarter. Shipping is expected to begin in October.