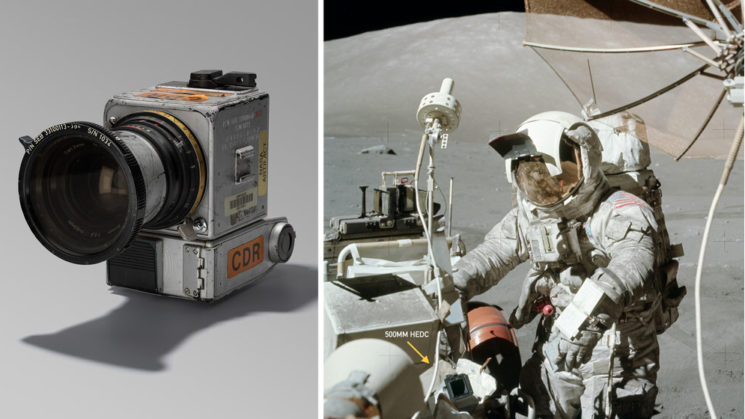 Most of the cameras that have been on the Moon have reportedly stayed there. So, it’s highly unlikely that you’ll find one here on Earth. Or is it? Photographer and space camera maker Cole Rise managed to find Gene Cernan’s missing camera from Apollo 17. And no, he didn’t have to fly to the Moon to get it – it has been in a museum in Switzerland.

Cole published a great article about his search for Gene Cernan’s missing Moon camera. It took him quite a lot of detective work not only to track it down, but to figure out that it indeed returned to Earth. Although Cernan had been saying that he left his camera on the lunar rover, the truth is wrapped with a veil of mystery.

“Looking closer, there’s a sprinkling of evidence in photos and transcripts that suggest his camera did in fact return to earth, contradicting both the 1972 NASA inventory and the astronaut,” Cole writes in his article. However, there’s no mischief or intentional deception here, he adds. “I believe Gene Cernan did leave a camera on the lunar rover, just not “his.” Memory can be a fickle thing, even for heroes, and that rings especially true in this case when the story involves not one camera, but three.”

The thing is, there were three different cameras on the Apollo 17 mission. Each astronaut was assigned his camera with a 60mm lens. They would use them to document samples, experiments, and the lunar terrain, and they would be labeled “CDR” for commander and “LMP” for the lunar module pilot. Although each astronaut had their own camera, they would often swap them. “On Apollo 17, Jack Schmitt – LMP and geologist extraordinaire – was set up with the black & white film. When he needed color, he’d grab Cernan’s camera and vice versa,” Cole explains.

“A third Hasselblad camera was also to be used on the mission; it was a bit of a beast really, boasting a 500mm telephoto lens meant to capture distant lunar features for, you know… science. Of the two astronauts, Cernan got stuck looking down the barrel of the 500mm the most, so it’s entirely possible that this is the camera he remembers leaving on the rover. In fact, the post-flight analysis of the transcript pretty much confirms it.”

Cole dug out deep to find out what happened to the cameras from the Apollo 17 mission. He analyzed the Apollo 17 LM Lunar Launch Stowage List, but noticed some discrepancies. Listening to the transcripts led him even further. He figured out that Cernan’s camera flew back to Earth after all!

Finally, Cole went through the photos captured on Apollo 17. From their Réseau plate, he could see that Cernan’s CDR camera was labeled S/N 1023, and Schmitt’s LMP camera was S/N 1032. But this is where he got stuck – at least until 29 February this year.

“While I was researching a detachable polarizer used on the moon, new images of a lunar Hasselblad popped up on Instagram from Swiss photographer Marco Nietlisbach. No mention of it’s history, just a simple description “Camera: HEDC (Hasselblad 500 EL Data Camera) with a Carl Zeiss Biogon f5.6-60mm lens.” So I reached out.”

“Marco is Head of Professional Services at Light & Byte, a Zürich-based photo equipment supply shop. Its located very close to Omega, which produced most of the Apollo moon watches. So, Marco had a unique and rare opportunity to take photos of “a real moon camera,” on loan to the Omega Museum from NASA, as Cole explains. “Whether the camera was flown or not wasn’t known by photographer or museum curator,” Cole adds.

Marco kindly sent Cole high-resolution photos of the cameras he photographed at the omega museum. And from here, Cole did some more digging and thinking. As he was able to get a closer look at the camera, he could also see the part and serial numbers: P/N SEB 33100040-307, S/N 1023.

“Hmm. That got me thinking. If it was flown and used on the surface, there were 6 possible Apollo mission commanders it could have been assigned to. Apollo 11 didn’t use CDR stickers, so it was easy to exclude that mission. Scanning the stowage lists for the “-307” suffix on the part number identified it as a later camera, likely Apollo 15 forward, which whittled the list of possibilities down to 3 commanders. I started with the last mission, Apollo 17, searching for the “23” serial number at the bottom of every photo.

No. Expletive. Way. Not 5 minutes into looking, there it was. Could this really be Gene… Cernan’s… camera?”

Yes, it looks like Gene Cernan’s Moon camera is here on Earth after all! It’s safe and sound at the Omega Museum in Switzerland. Needless to say how exciting Cole was to discover this. I mean, I was excited even while reading about it. After his discovery, Cole reached out to NASA to confirm what documentation they have on the artifact. He hasn’t heard back yet, but he’ll update his article if he does and I’m looking forward to hearing more about this story.