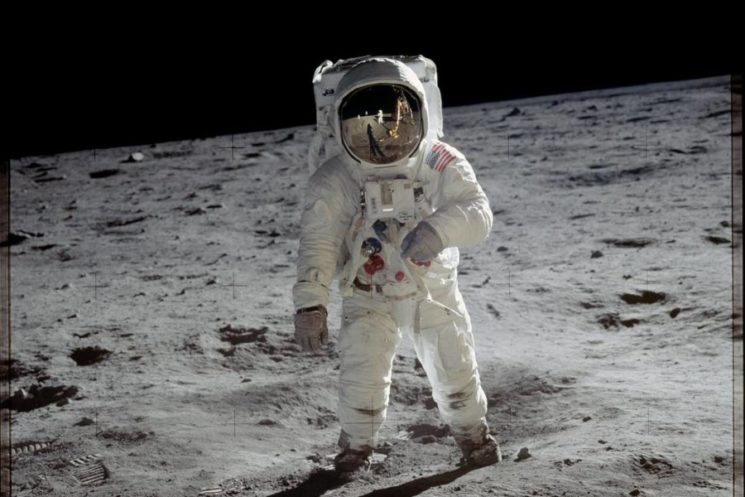 NASA’s Apollo Program was an audacious mission to send astronauts to the moon – a national goal set by President John F. Kennedy’s in a bold speech in 1961 that was an ongoing part of the Cold War. NASA’s use of photography aboard spacecraft originated during the Mercury Program when John Glenn carried two cameras during his Mercury-Atlas 6 program: 1) a Leica 1g for ultraviolet spectrascopic photos, and 2) a modified Ansco Autoset (which was a rebadged Minolta Hi-Matic by the Ansco Company) which took the first human-shot, color still photos.

Astronaut Wally Schirra had been using a Hasselblad 500c for his personal photography, and suggested medium format to the NASA managers in charge of photographic equipment. NASA engineers modified the camera for space – removing excess weight, modifying the controls to accommodate space suits, and commissioning a custom back to hold more film. The results were so satisfying that NASA contracted Hasselblad to build kits designed specifically for space missions. 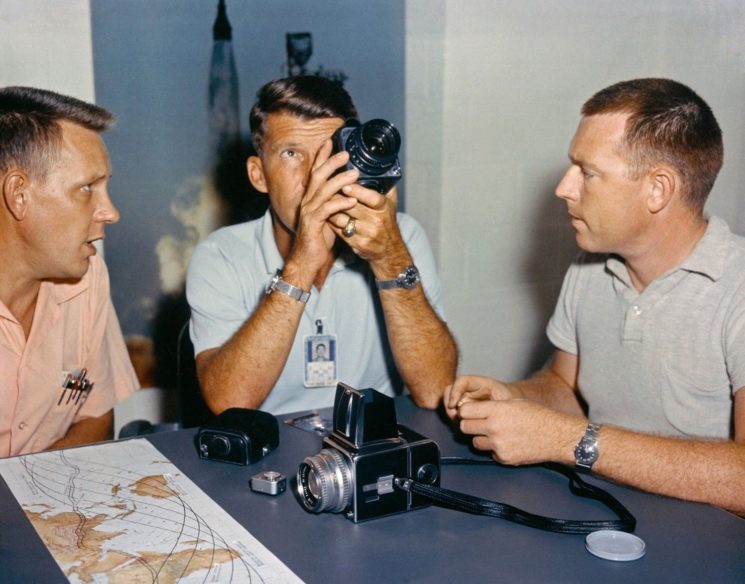 By the time Apollo 11 made man’s maiden voyage to the lunar surface, as depicted in First Man, Hasselblad had been an important part of the space program. Neil Armstrong carried a Hasselblad 500EL Data Camera with Reseau plate, a glass plate with precise etchings that were exposed onto each shot to allow for photogrammetry. The lens of choice was a Zeiss Biogon 60mm f/5.6 lens which has a field of view roughly equivalent to a 35mm full-frame lens. 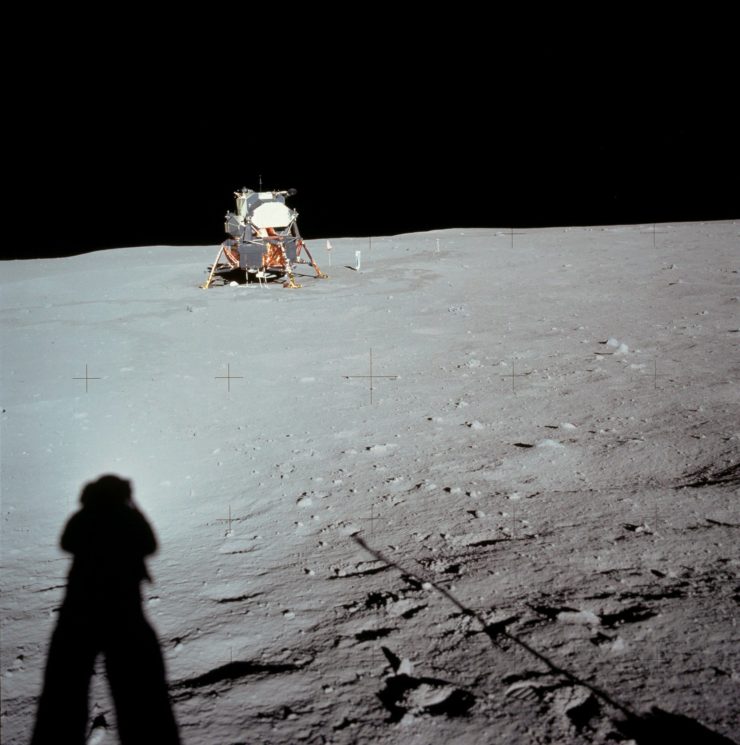 This photograph of the Lunar Module at Tranquility Base was taken by Neil Armstrong during the Apollo 11 mission, from the rim of Little West Crater on the lunar surface. Armstrong’s shadow and the shadow of the camera are visible in the foreground. This is the furthest distance from the lunar module traveled by either astronaut while on the moon. Note the cross grid formed by the Reseau plate. 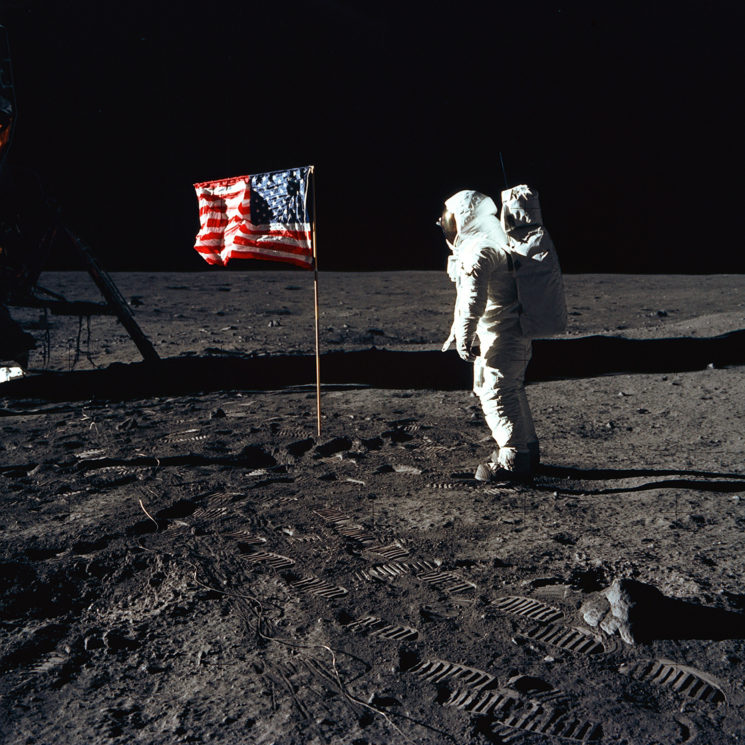 AS11-40-5875 (20 July 1969) — Astronaut Edwin E. Aldrin Jr., lunar module pilot of the first lunar landing mission, poses for a photograph beside the deployed United States flag during an Apollo 11 extravehicular activity (EVA) on the lunar surface. The Lunar Module (LM) is on the left, and the footprints of the astronauts are clearly visible. 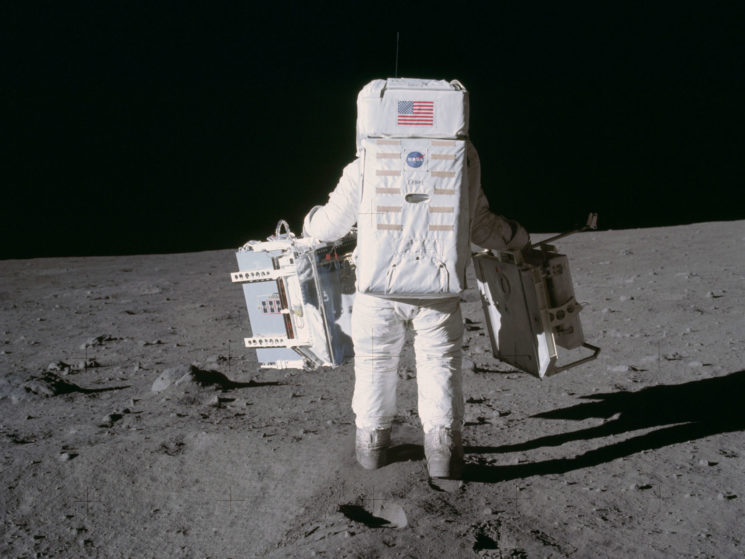 Buzz Aldrin moves toward a position to deploy two components of the Early Apollo Scientific Experiments Package (EASEP) on the surface of the moon during the Apollo 11 mission.

Although Schirra’s original Hasselblad sold at auction in 2014 for $275,000 along with its Planar f/2.8 80mm lens, you won’t ever find cameras that have made it to the lunar surface on auction.

“The journeys home from the moon made very special demands on what could return regarding weight, etc. So, having fulfilled their mission, a total of thirteen cameras were deemed as an encumbrance and therefore left behind. Only the film magazines containing the precious latent images were brought back.” 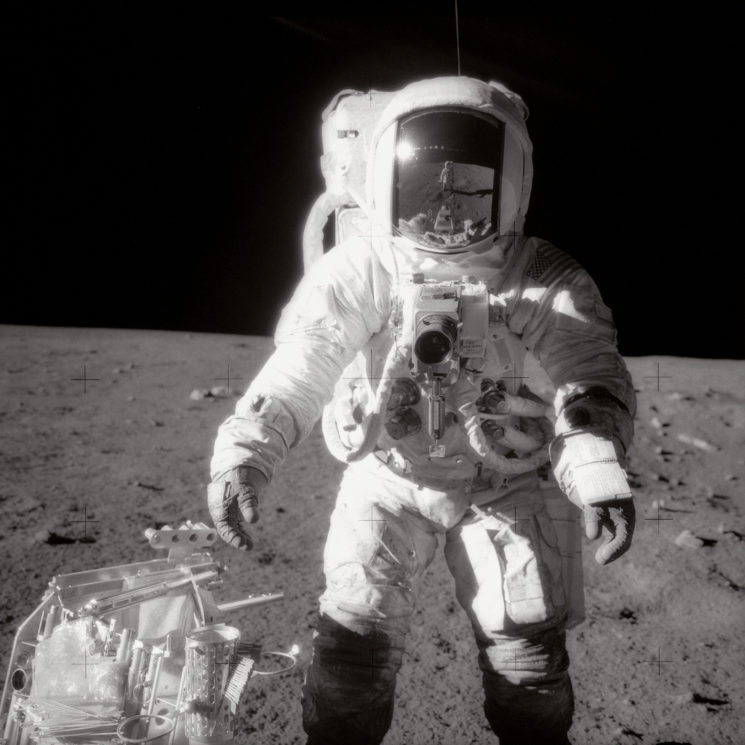