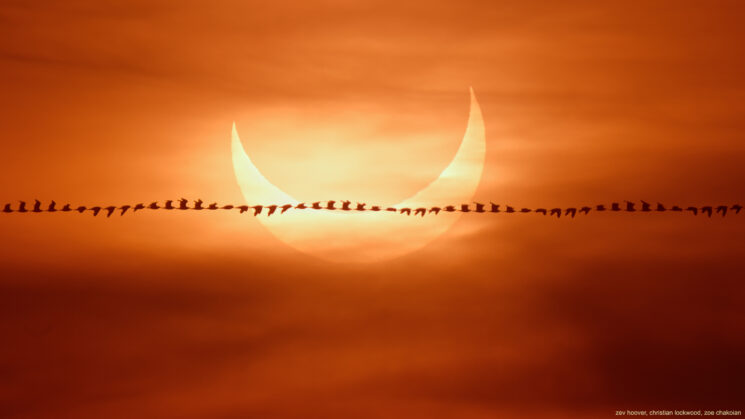 Photos and videos of the recent partial solar eclipse are starting to come in, leaving me incredibly inspired. Photographer Zev Hoover made a series of photos that made my jaw drop the moment I saw them. He captured a sequence of a bird flyby in front of the solar eclipse, adding a dash of abstraction to this amazing scene. I spoke with Zev a bit about how he took them, and he kindly shared some details and of course – the photos – with DIYP.

Zev is an imaging engineer and photographer based in Boston. On 10 June, Zev, his girlfriend Zoe, and his colleague Christian got up at 3:30 am to drive out and set up equipment at Quincy Beach. They were hoping to get footage of the sunrise eclipse with a Boston lighthouse in the foreground. Zev used a 1000mm refractive telescope at f/13, and a Sony a7SIII recording into an Atomos Ninja V so he could shoot 60 RAW frames per second.

However, they were disappointed to see a dense cloud layer close to the horizon where the sun was supposed to show up. Still, they set up the equipment on the Quincy shore overlooking the Boston harbor. They waited for the first light and hoped for the clouds to clear up. And it happened: as the sun rose, the clouds began to thin. Zev tells me that the sun actually peeked out just as the eclipse was reaching its fullest point. It was the first stroke of luck for the day, but then came another one that made these photos possible.

“A gull happened to fly through my frame perfectly silhouetted against the sun and moon at that moment,” Zev tells DIYP. “I started recording on my telescope just as it passed by.” Later on, Zev turned the frames of the video into photos, and the one below ended up being Astronomy Picture of the Day.

Zev tells me that the processing of the image was quite simple, and he described what he did:

“Consecutive video frames were statistically combined as one might do in a scientific context to increase signal strength, but instead of averaging the frames together, I used a minimum function. This is a way of including the dark silhouetted bird from every frame against the eclipse, without doing individual masking that is both tedious, and feels somewhat less authentic than a purely statistical composition.” 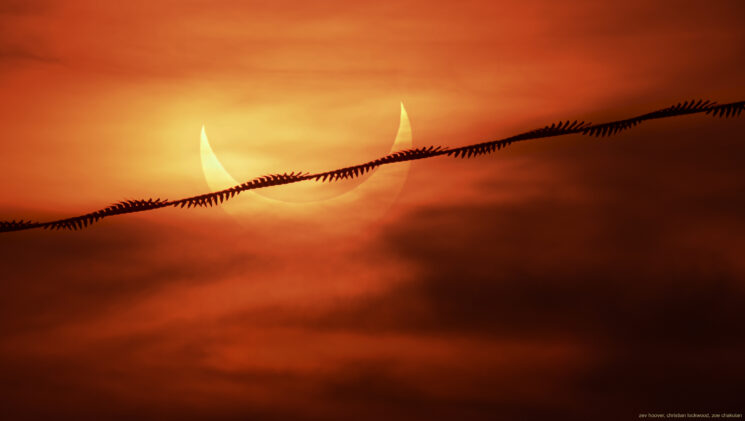 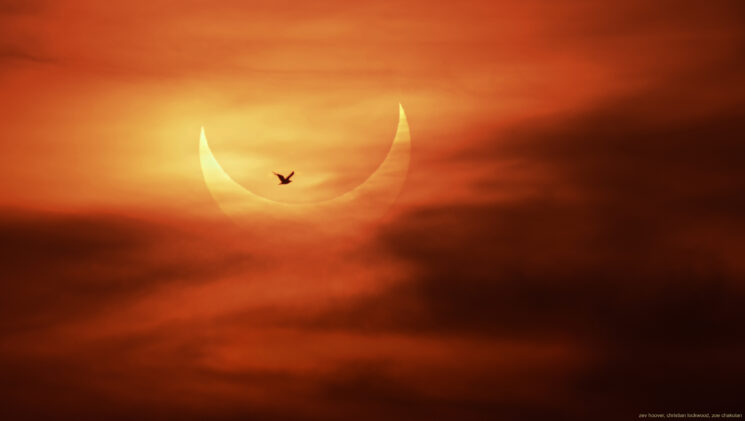 While this is a processed image, Zev points out that it’s not a faked or contrived one. Other image manipulation was limited to basic brightness and contrast adjustments he needed to bring out the detail. What’s more, the eclipse you see in the photo is exactly as it was seen with the naked eye, which I also find truly awe-inspiring. Thanks to the cloud layer, Zev managed to capture everything without a solar protective filter.

“I was so happy to see this lucky shot come out of what seemed like it was a wasted effort due to weather,” Zev tells DIYP. “And something about seeing the sinusoidal motion of the gull’s wings cut directly across the intersecting orbital paths of sun, moon, and earth that make an eclipse image like this possible… strikes me as poetic.”

Even though Zev was behind the camera, he points out that this was a group effort between him, Christian, and Zoe. They helped him with the logistics and putting together the equipment, and the whole shooting couldn’t have happened without them. “Photographers have an odd habit of only crediting the person who pressed the shutter button even though many other folks directly contributed as well,” Zev says. “Movies have credits, not just listing the cinematographer or the first AC, hence why we are sharing the credit to this image.”

Therefore, big thanks to Zev Hoover, Christian A. Lockwood, and Zoe Chakoian for making these epic images happen, and thanks Zev for sharing them with us. Make sure to check out more of Zev’s work on his website and follow him on Instagram.

« Sony vs Fuji vs Canon vs Nikon shoot it out to find the APS-C mirrorless camera king
This impressive solar eclipse timelapse took 50,000 photos and 250 GB of data »