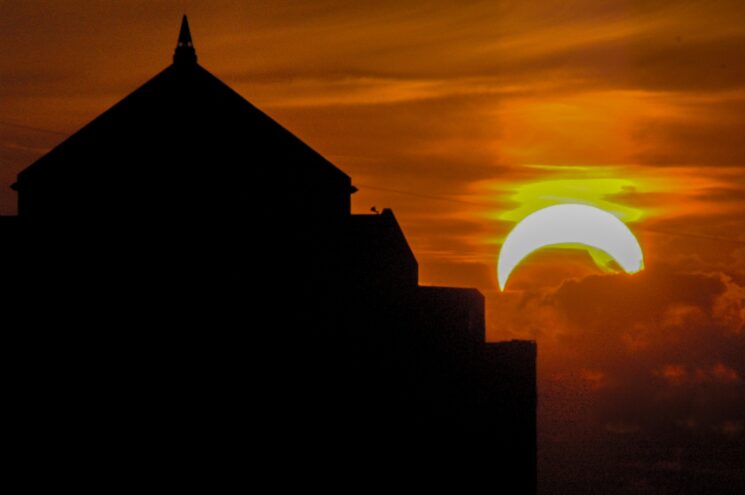 Even if you’re not an early bird, here’s something worth getting up earlier for. On 10 June this year, the US and Canada-based photographers will be able to observe and shoot a “sunrise eclipse.” In other words, the sun will rise in the middle of a deep partial eclipse, giving you a chance for creating some striking images.

The pretty rare “sunrise eclipse” will be visible from the northeastern United States and eastern Canada. For you, the sun will look like a crescent instead of a circle. If you have a view with a clearly visible horizon, you may be able to catch the “horns” of the sun peeking above the horizon first. Sure, it will take some planning and being at the right location, but I’m sure it will be worth it.

Naturally, the eclipse will be visible in other parts of the world too, although no one will experience totality. The reason is that the Moon will be almost at the farthest point from Earth in its orbit, so it won’t appear in the sky big enough to completely hide the Sun (like in 2017 for instance).

Over northern Ontario and in the high Arctic, you’ll be able to see something close to the total eclipse: annular eclipse. It’s also called “a ring of fire” and it’s pretty much how it looks. As the Moon appears smaller from the Sun, it blocks it but leaves a visible “ring of fire” around the dark area. Keep in mind though that the path of annularity won’t appear over densely populated areas. Most of you will only be able to see a partial solar eclipse.

No matter where you plan to be and if you plan to shoot the eclipse or not, don’t forget to not stare at the sun. Although, those of you who will observe the “sunrise eclipse” will be able to take a quick glance even without the protective glasses. Jackie Faherty, a senior scientist at the American Museum of Natural History, says: “At sunrise or sunset, you’re looking through an enormous amount of atmosphere—and that atmosphere protects you, to a certain extent.” Pay attention to the “to a certain extent” part and whip out those eclipse-viewing glasses from 2017.

So, plan ahead, be prepared, and be safe. And if you manage to take some shots, feel free to share them with me as I live in the other part of the world. :)

Super Moon Is Coming June 23rd, Get Your Cameras Ready