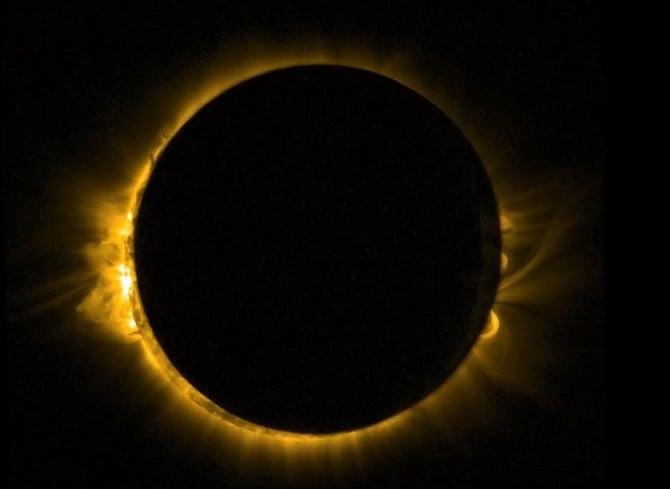 The total solar eclipse I’ve been telling you about (here and here) ended just minutes ago.

For those who were unable to see it due to clouds, your location or lack of proper gear, no need to worry; I’m sure your Facebook feed will be full of peoples’ photos of the relatively rare occurrence.

Many of these photos are bound to seem virtually identical, but the European Space Agency has captured a series of photos that will no doubt stick out from the rest. That’s because the ESA’s footage was captured from space using its Proba-2 minisatellite.

Other than the photo above, the ESA also released a short time lapse of the event.

The amount of visitors to the Faroe Islands, where 100% of the solar eclipse could be seen, was said to have made up almost 20% of the islands’ population. The 8,000 visitors had to race to get one of the 500 hotel room, but I doubt any of them will remember having to sleep in a local’s house or on a ferry after viewing such an incredible spectacle.

Millions of people all over northern Europe and the UK took advantage of the eclipse’s great visibility in their area.

For those who missed it and don’t want to settle for seeing it online, the next total solar eclipse visible in Europe will take place on August 12, 2026.

Astronomy fans based in the United States will have to wait until August 21, 2017 for the next total solar eclipse.

That gives you plenty of time to go over these tips for photographing a solar eclipse.

Total Solar Eclipse is coming next month, this is what it looks like from space