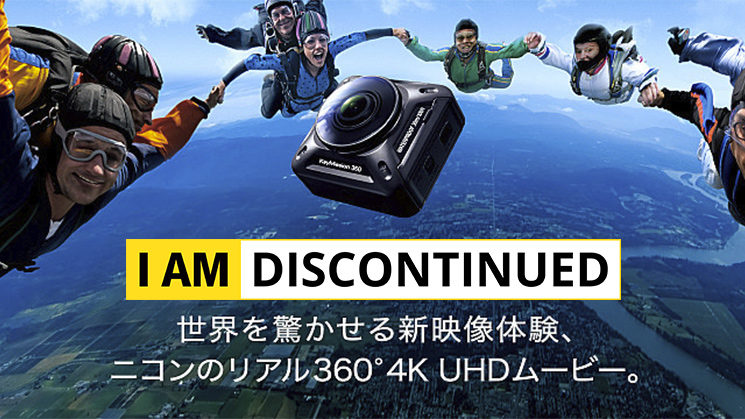 Nikon’s KeyMission line of cameras arrived with a pretty huge fanfare. Their entire Photokina 2016 press conference was based around them. But they’ve been a bit of a flop, really. Now, Nikon websites around the world are showing various models of KeyMission as being “Discontinued”.

It’s not surprising, really. While there have been a couple of KeyMission proponents and stories of extreme survivability, the KeyMission line had a rocky start, a not-too-great middle and now, apparently, an entirely underwhelming end.

The KeyMission 360 was initially announced in January 2016. Then, there were the delays. Followed by more delays, along with the surprise leak of two more KeyMission cameras. At Photokina in September 2016, those new cameras were made official during a large press announcement & presentation.

It was all quite impressive, really. They had several large screens showing off what the camera could do, and the footage actually looked great, for the most part. There were a few obvious issues with dynamic range, and the footage used was obviously cherry-picked for the presentation. But, overall, it did seem quite good.

Finally, toward the end of 2016, though, the cameras were released. The biggest draw of the three cameras was obviously the KeyMission 360. And when it did eventually come out, the reviews didn’t look great at all. Given its price, people expected a lot more than the KeyMission 360 offered.

Now, according to the Nikon Japan website, it seems that Nikon has finally decided to give up on the world of 360° cameras. On there, the listing basically says that it’s discontinued – in a Google Translate kinda way.

Giving up might not be your first thought just based on this. Perhaps it’s just end of life and a newer model, that’s actually impressive, is on the way. Time for excitement, right? Well, maybe, if not for the fact that the Nikon UK website also lists both KeyMission 80 models as being discontinued, and the KeyMission 170 out of stock.

Nikon UK does still list the KeyMission 360 as being available, with a massive discount over the original price – normally more than double this. So, it’s likely that they’re simply selling off old stock now until it runs out.

It is a shame. Given the company that Nikon is, and the tech they possess, they had the potential to completely destroy the competition in this market. Given the pressure that GoPro has already been under the last few years, it shouldn’t have been difficult, either. That is, assuming the KeyMission cameras hadn’t sucked.

It would’ve been nice to see Nikon excel in this area. Let’s hope they don’t screw up mirrorless, too.