It looks like Nikon are planning to not only enter the world of 360VR but take on the action cameras, too. It makes sense. It’s a huge market, and many action camera owners have 2 or 3 of them. The KeyMission delays are believed to be due to the earthquakes experienced in Japan earlier in the year.

It seems they haven’t wasted the time since then. Instead of just a single camera, though, it appears the KeyMission is now a small family of cameras. At least, that’s what Nokishita are reporting. Along with the 360, we’ll see a GoPro styled action camera with 170° field of view as well as a bodycam that has an 80° field of view.

The action camera seems pretty cool, and about as one would expect an action cam to look. Except, well look at that lens!

No word on real features yet other than the name “KeyMission 170″ and a few clues printed on the thing. Waterproof to what looks like 10m. As it’s printed on the camera itself, we have to assume it’s without an underwater housing. The ballhead seemingly screws into the bottom using what I can only guess is a standard 1/4-20” tripod mount.

If it is a tripod mount, then there are plenty of pre-existing adapters out there to add a GoPro mount if required. Nikon may also announce this with a housing that lets you go deeper than 10m, which may offer the GoPro mount. 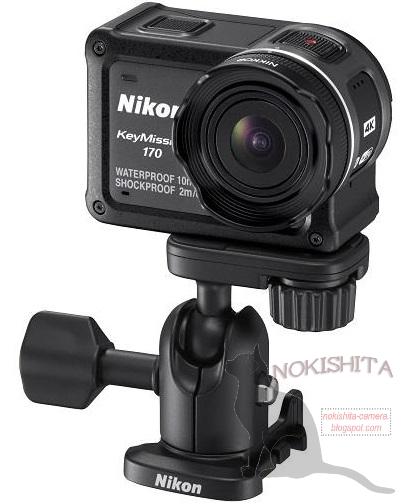 It seems to shoot 4K, but as I mentioned above, the lens looks pretty huge. Whether it’s all for show, and simply a fancy looking hood to prevent flare, we’ll have to see. The pads at the base of the hood do suggest a rotating ring of some sort. Perhaps for tweaking focus? Perhaps it’s a zoom?

No shots of the back, so no idea if it has an LCD, or what connectivity ports it may have. Presumably at least USB. As for HDMI, microphone input, etc. I guess we’ll have to wait and see.

The KeyMission 80 is the 80° bodycam. I’m going to say right off the bat that I really don’t think this has a built in LCD. I’ll be pretty surprised if it does, given the nature of the camera. This, like the KeyMission 170 appears to be waterproof, although only to a depth of about a meter. So, it sounds like you should be pretty safe if it comes off and falls into a puddle. I wouldn’t go swimming with it, though. 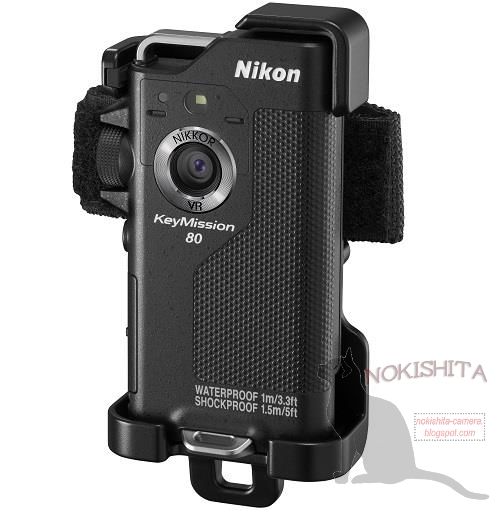 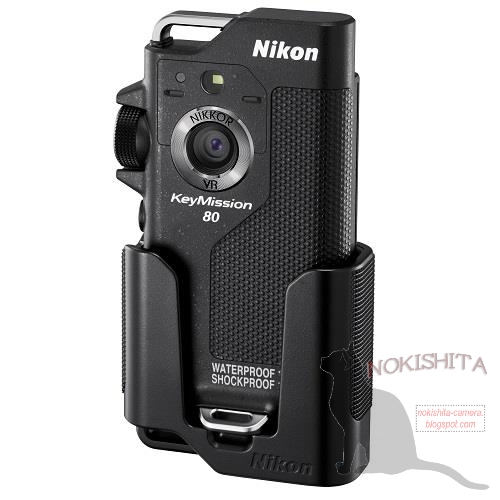 The lens appears to have built in VR. Given how well Nikon’s VR technology works in its DSLR lenses, it’ll be interesting to see how well it performs at such a small scale. Action camera stabilisation really hasn’t impressed me for the most part (without external gimbals). Many use electronic stabilisation, and even the ones that have physical internal stabilisation haven’t been that great. So, Nikon have a good chance to really raise the bar with this one.

I do wonder who Nikon’s market is with the bodycam, though. Are they looking to sell in bulk to law enforcement, security forces, etc? Or is this just more practical for action junkies who want to strap a camera to their chest rather than their head or handlebars?

There’s also a new ML-L6 KeyMission remote control expected. No news on exactly what features it will offer.

That’s pretty much all the info so far.

The KeyMission 360 was supposed to be delayed until October. Perhaps that date was chosen specifically to coincide with a previously planned launch for the other two cameras. If there isn’t an announcement sooner, I would expect to probably hear something at Photokina.

We’ll be at Photokina this year, though, so if Nikon have got these there, we’ll be sure to check them out and let you know what we think. I have to say, a Nikon action camera does sound very intriguing to me. I’m looking forward to seeing how it stacks up against the competition.

Have you been waiting for the KeyMission 360? Or have you already gone with something else? What do you think of the new action cam? Will they be able to steal some of the market from GoPro? Would you use a bodycam for action? Let us know what you think in the comments.

« A primer to advanced composition (and critiquing your own work)
Facebook censored, then uncensored, famous photo of ‘Napalm Girl’ »