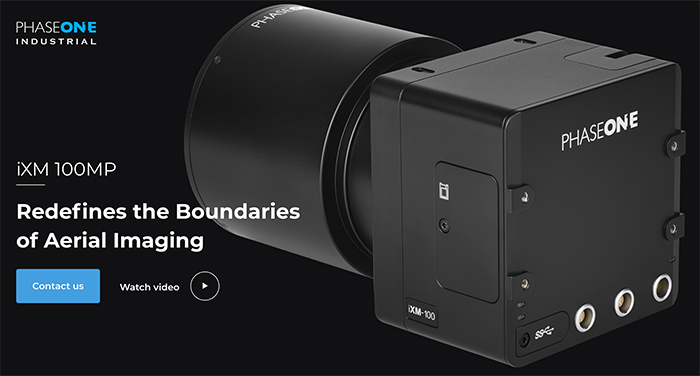 Phase One has just announced the iXM 100MP camera for aerial imaging. It boasts Sony’s medium-format sensor which will also be used in Fuji GFX-100S and Hasselblad X1D-100c.

Priced at $40,000, Phase One iXM 100MP is not going to be for the average drone photography enthusiasts. Its sensor alone packs a lot of features not available in other UAV cameras. Its frame size is 33 x 44mm. and has a resolution of a whopping 100MP. The sensor also incorporates backside illumination technology for better light sensitivity and dynamic range. The iXM’s ISO range can go up to 6,400, which is more than the maximum ISO of most aerial cameras.

Phase One also offers its own series of lenses built specifically for the iXM. They offer 35 and 80mm. fixed focus lenses, as well as 80 and 150mm motorized focus options. They have an integrated leaf shutter that can capture 3 fps with shutter speeds of up to 1/2,500 sec.

The iXM 100MP would appear to compete directly with Hasselblad’s H6D-100c, which is also a dedicated aerial camera. However, despite being released last year, some of the H6D-100c’s specs still beat the Phase One camera. It has a bigger 53.4 x 40.0mm sensor and can go up to ISO 12,800 (double than that of the iXM 100MP).

Having said that, I’m not suggesting that the iXM 100MP’s future looks bleak. Before I make any judgment,  I want to wait for its release in June and see its real capabilities.

If you want to learn more about the iXM 100MP, you can watch this video below:

For more information, you can also visit Phase One’s website.

Phase One takes on the human eye with new $45,000 IQ3 100MP Trichromatic digital back

PONF is a film/digital hybrid camera, and it will feature a 100MP Sony sensor

« Fotcase is yet another Kickstarter project that promises to be the best camera strap
Sionyx Aurora camera features color night vision, and it’s a hit on Kickstarter »