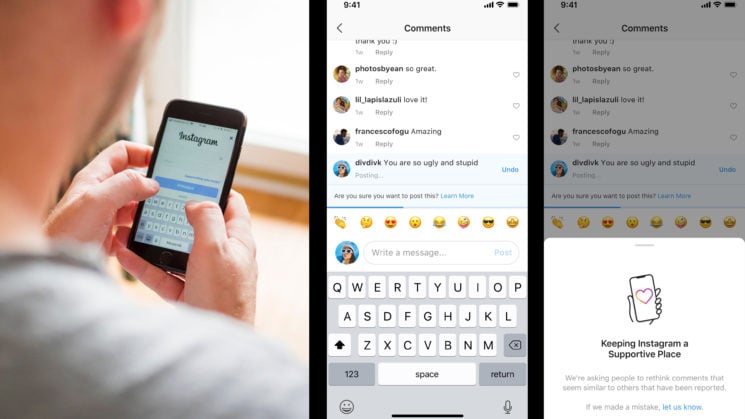 With two new AI-powered features, Instagram is continuing its fight against online bullying. From now on, the platform will guilt-trip everyone who tries to post a nasty comment. At the same time, you will be able to shadowban everyone who bullies you in the comments.

Instagram CEO Adam Mosseri posted about the upcoming changes on the company’s blog. As you may remember, the platform introduced some AI-powered features back in 2017 as an attempt to fight online bullying. It was first used in comments, but it was expanded to photo content the following year. Since 2017, users have also been able to control comments themselves by choosing who can comment on their posts. But it seems that there’s always something to improve. So, Instagram has now added two new features, one AI-based and the other relies on users themselves.

Encouraging positive interactions (or guilting out the comment trolls)

The first of the two new features is AI-powered. Mosseri writes that this feature is “especially crucial for teens.” He adds that they are “less likely to report online bullying even when they are the ones who experience it the most.”

Basically, this feature notifies people when their comment may be considered offensive before they post it. This gives them a chance to reflect and undo their comment, so the recipient doesn’t receive a hateful comment. You may think that this won’t discourage people from being hateful in online comments. It was my first thought, at least. However, Mosseri writes that early tests of the feature showed that it works. It actually prompted some people to undo their comments and “share something less hurtful once they have had a chance to reflect.” Honestly, I’m still not entirely convinced this will help fight bullying, but that’s why the second new feature is here. 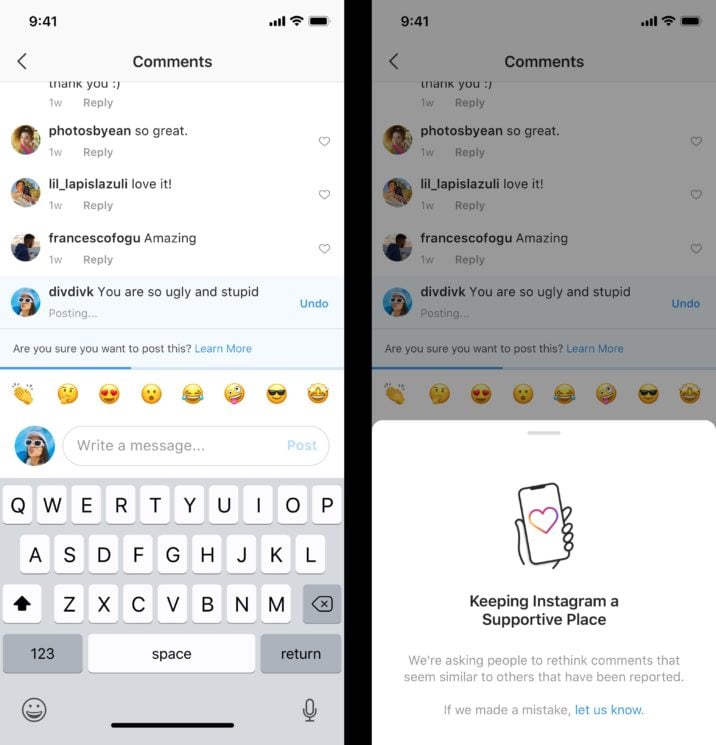 The second new Instagram feature is focused on the users who are bullied, rather than on bullies. Personally, I find this one more useful because it puts you in control. Essentially, if you receive hateful comments from someone, Instagram now lets you block them in a non-traditional kind of way:

“Soon, we will begin testing a new way to protect your account from unwanted interactions called Restrict. Once you Restrict someone, comments on your posts from that person will only be visible to that person. You can choose to make a restricted person’s comments visible to others by approving their comments. Restricted people won’t be able to see when you’re active on Instagram or when you’ve read their direct messages.”

But why wouldn’t you just block a bully? Well, that’s what I’d do for sure. As it turns out, it’s not always that simple. “We’ve heard from young people in our community that they’re reluctant to block, unfollow, or report their bully because it could escalate the situation,” Mosseri writes, “especially if they interact with their bully in real life.” In addition, some of these actions “make it difficult for a target to keep track of their bully’s behavior.” I think that this new Restrict feature is a neat addition to the other features that let you deal with bullies or simply with people you don’t like. 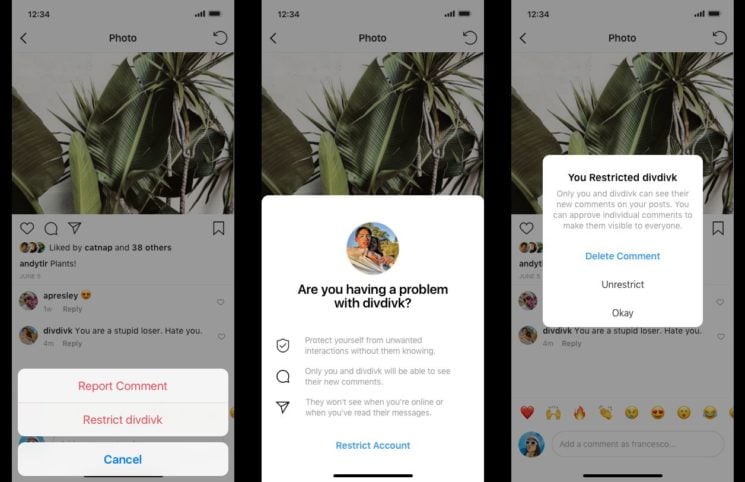 Just like any bullying, online bullying is a serious and widespread problem, especially among young folks. At the same time, young people are Instagram’s most numerous users. So, I’m glad to see that Instagram is taking steps and finding new ways to put an end to reduce online bullying.

« This guy stole an iPhone and posted a selfie to victim’s Instagram
UK magazine uses photo on cover without permission, blames it on a stock photo website »