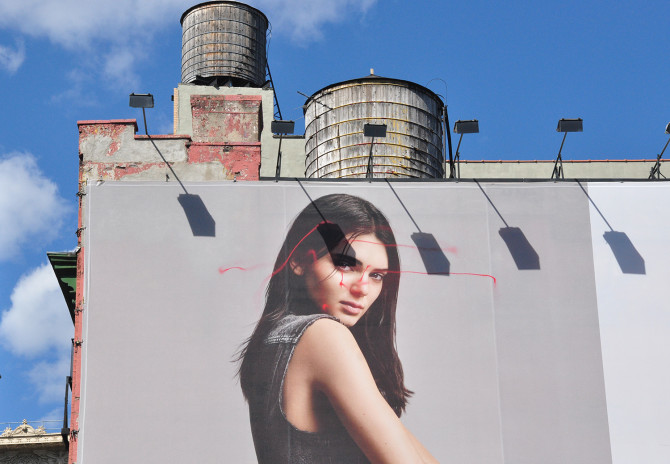 We have reported drones causing damage inadvertently by crashing into buildings or losing contact with operator, but this is the first time we are reporting a DJI phantom being used to a deliberate act of vandalism.

On Wednesday morning last week, the first large-scale drone-driven graffiti was done in one of NYC’s biggest and most prominent billboards. The billboard, featuring a huge ad of Kendall Jenner for Calvin Klein was tagged using a hacked DJI Phantom.

At 6 stories tall, this billboard is one of the tallest boards in NYC. You can see it if you walk past the intersection of Houston St and Lafayette St. at six stories tall, as you can imagine, it is not trivial to tag a face. And definitely not easy if you are going for more than a meter or two off the roof.

The artist/vandal who is responsible is KATSU, a well known figure to the New York graffiti scene. And while a drone-graffiti is A LOT easier than climbing to the roof, and is a lot faster to break down if the police comes in KATSU tells Wired that “It was a bit tense.”

KATSU tells that this is a V1 proof of concept and that it is still not trivial to control the drone for any real painting: “Seventy percent of the concentration is in maintaining this equilibrium with the two dimensional surface while you are painting“. But this act marks a new use for drones, and regulation that has been advancing slowly so far, had may speed up as these events are becoming more common