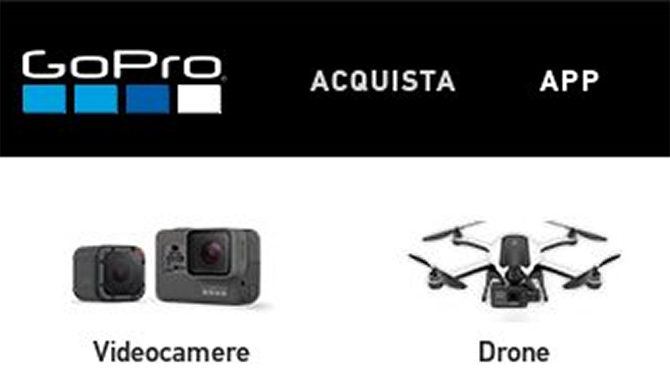 GoPro are officially announcing their new Karma drone on September 19th, perhaps the Hero5, too. GoPro have kept both a very closely guarded secret for months. It looks like somebody at the GoPro website got a little eager, though. For a short time, GoPro’s European websites displayed an image of a drone, a strange looking camera, and a handheld gimbal in the header.

One can only assume that these are the Karma drone and Hero5 action camera. This isn’t the first time we’ve seen hardware and software creators leak themselves. I would, however, have expected tighter controls on a product surrounded by as much secrecy as the Karma.

The mistake was first noticed by Twitter user, Konrad Iturbe, who posted this screenshot.

In it, we can see an action camera with a very different appearance to their existing lineup. The image shown here would be consistent with those that leaked not too long ago. Next to that, a drone, presumed to be the Karma. And then, a handheld action camera gimbal.

The Karma looks intriguing. It’s much closer to the ground than the DJI Phantom 4. With the image scaled up to give the camera a similar size to that of the Phantom 4’s camera, they appear quite similar in overall wingspan.

That in mind, the image also suggests that this isn’t going to be quite the compact fold-away drone that some were hoping for. With DJI’s recent Mavic leak, that could potentially hurt sales of the Karma. That being said, the previous teaser of the Karma drone does show a versatility that DJI may not offer.

The handheld action camera drone is also an unusual, but inevitable product from GoPro. Handheld gimbals have taken off in a big way lately. As more reliase that selfie sticks just can’t cut it, demand for smoother footage is on the rise. It seems almost daily that a new handheld gimbal of some form or another is released. It will be interesting to see if the gimbal has any features tying it to the Hero4/5 action cameras that other gimbals may not support.

It certainly seems as if GoPro may be looking to muscle in on DJI’s market, but I think they’ll have a tough time on their hands. With sales dropping month on month for a while now, they may be too late to the drone party. On the other hand, there may be enough brand loyalty out there to give the Karma exactly the start that GoPro need.

So, Hero5, Karma drone and a handheld action camera gimbal. Potentially awesome new products, but will they be enough for you?

Will you be stepping up to the Hero5? Or are you happy with your Hero4 or other action cameras? How about the Karma? Are you getting one? Or did you get bored waiting and buy another drone already? And have you been considering a handheld action camera gimbal lately? Has this just made your decision for you? Let us know your thoughts in the comments.