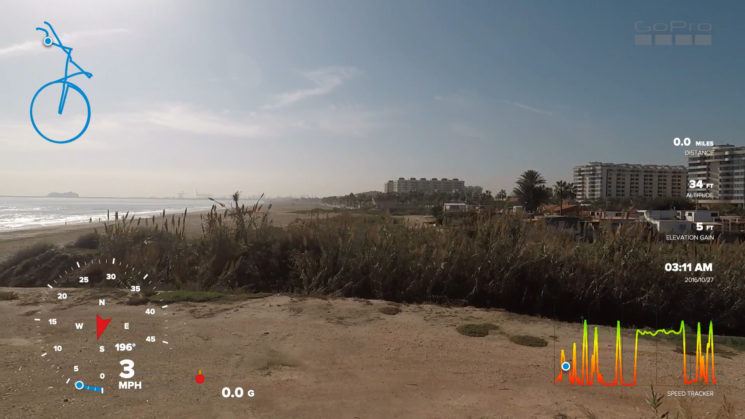 GoPro haven’t been having a great time of things lately. Share prices are down, sales are down, the Hero4 Black was practically usurped by a competitor at half the cost. The Karma’s been recalled, and the Hero5 Black wasn’t as impressive or as revolutionary as customers might’ve hoped for. But now, GoPro have surprised us with something that’s pretty cool.

Users were initially underwhelmed by the GoPro’s long awaited built in GPS features in the Hero5. Pretty much all it did was tag where our photos and videos were shot. Well, every cellphone can do that. All that changes, today, though. GoPro are taking every single bit of data logged by the camera to let your produce a real-time on-screen video overlay to represent different aspects of your journey.

The demo above shows the multitude of stats you can track. You’ve got your speed and direction, along with a map showing your path on the left. On the right, there’s the distance covered, altitude, elevation gain as well as the current time & date and a graph showing your speed across time. There’s also a little number near the lower left which shows you the current g-forces acting upon the camera.

For drone users who’d like to have a little more information about where they’ve been it’s a very handy tool. Other users who can benefit from such features, though, are pretty much anybody who moves from one spot to another as a course of filming. Motorcyclists, regular cyclists, runners, skateboarders, speed and sailing boats, and way more. That’s a fair chunk of GoPro’s market.

It’s a pretty cool feature for not only analysing the shots themselves, but those activities in which users participate, too.

The overlay isn’t recorded straight to the video file in-camera. So, all your original shots are safe and intact. You’ll need to download the latest version of GoPro’s Quik for Desktop to see the information. Videos you’ve already shot with GPS activated in the past can now also make use of this overlay.

You can either just watch them back for your own personal reference, or you can render out the graphics on top of the original footage in your final edit.

What do you think? Is this a feature that could see you switching back to GoPro from other action camera brands? Would even find such a feature useful for the kind of stuff you shoot? Is GoPro truly starting to show some real innovation again? If so, let’s just hope the trend can continue. Let us know what you think in the comments.