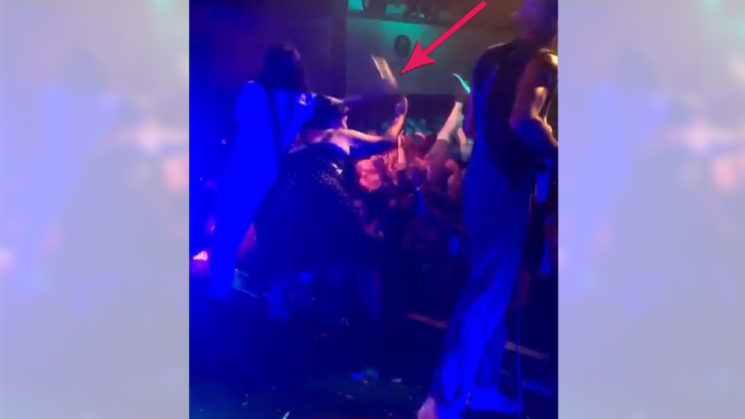 It’s happened before that musicians get fed up with people who watch a concert through their smartphones. This time, the frontman of punk-rock band Fidlar, Zac Carper, fought against it. Quite literally. As a fan jumped onstage and tried taking a selfie, Carper slapped the phone right out of her hand, sending it into the crowd.

Here’s a video of the incident Fidlar posted to their Instagram:

User SpiceEyes posted this on Reddit, where the post quickly caught huge attention. As a matter of fact, it got so popular, than Carper himself commented on it and told what had happened.

“This kind of stuff happens to us all the time. We encourage stage diving and moshing and all that good stuff. BUT this is where I draw the line. No selfies WHILE im performing. Sorry brah. A big ole nope to that. I kindly pushed her out of the way the first time to let her know I am not down, so my instinctive reaction was to get that phone out of my face.”

Interestingly enough, Carper tweeted four years ago “I have no problem breaking your iPhone 6 if you jump on stage and take a selfie while we are playing. Please, give me something to break.” However, this girl’s phone ended up without getting broken. “She laughed and she actually got her phone back after the show. Not broken or anything,” Carper explained. Can you imagine that? Well, I hope that she at least learned a lesson, because I don’t think she’ll be that lucky next time.

Different musicians have different ways of dealing with “fans” who watch an entire concert through their smartphone screens. For example, Bob Dylan and Adele stopped their concerts to call out these fans. Josh Klinghoffer of RHCP stopped playing and started filming the crowd. At his Belgrade concert, Nick Cave subtly called people out through lyrics about Instagram he made up in the middle of the show. Jack White made his fans keep their phones locked away in special pouches. The most extreme examples include Carper, or Judas Priest’s Rob Halford, who knocked the phones out of fans’ hands.

Some people argue that the last approach is kinda mean. I tend to agree, although I can totally get the musicians’ frustration. I personally get so triggered by people who raise their phones in front of my face, that I have the urge to kick those phones myself. But that’s another story. What do you think, was Carper’s move over the top? Or that’s the way to send a message?