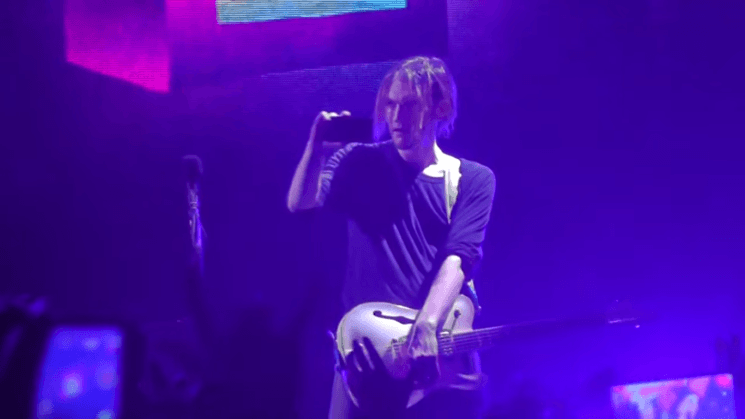 Josh Klinghoffer, the guitar player of Red Hot Chili Peppers, got fed up with the audience filming the concert with their phones. Instead of playing the solo in “Californication”, he grabs his own smartphone and starts filming the crowd to make a statement.

As the band begins to play one of their greatest hits, everyone starts screaming and lifting their phones in the air (as it usually happens). At 3:33 in the video, you can see the moment when Josh picks up his phone and starts filming the audience instead of playing the well-known solo. He’s obviously mocking them and pointing out that they’re missing the show, but unfortunately, they don’t seem to get it.

When asked about the event, this is what he said:

“Phones make a lot of things easy. They also have stripped a lot of things of a certain innocence and excitement that I think made things special. It’s up to us to use these things in a respectful way. When I see people holding machines up and obstructing the view of the people behind them, I get angry. I’ve never heard a musician say: ‘Oh man, I love looking out and seeing a sea of phones.”

I’m not a huge fan of Red Hot Chili Peppers, but I like this move. Although it was unplanned and made out of utter annoyance, I think it makes a statement. I’m just sorry that the audience doesn’t seem to get the point.

I am often at concerts and gigs, and I must admit I take photos. But it’s always a single photo when the band comes to the scene because it serves as my visual diary. After that, I feel it all through my eyes and ears. I hate those people around me with their phones in the air all the time. I don’t care that they’re missing the show, it’s not my problem. But they’re always blocking the view to me and all those who want to experience the concert through their own eyes. Once, a guy right in front of me tried to film Roger Waters’ concert with a freaking tablet. How self-absorbed you need to be?

Of course, I may be wrong, but it’s just my point of view and how I like to experience concerts. I’m curious to see your thoughts. Do you take photos and videos at concerts? But more importantly – do you watch them when the show’s over?

Adele stops concert to call out a filming fan, telling her “take your tripod down”