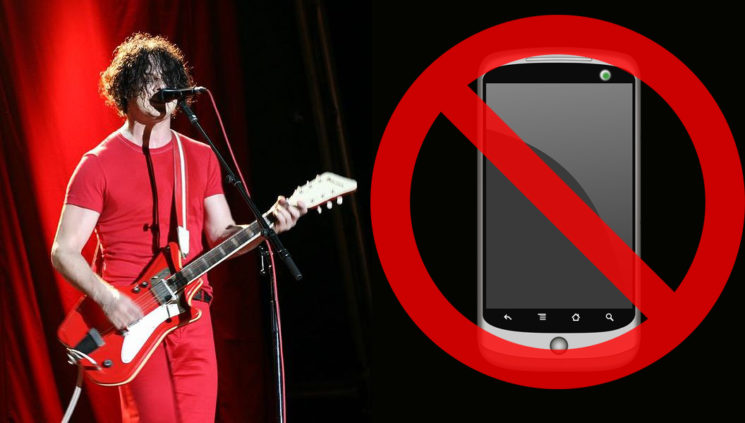 Are you annoyed by those people who stand in front of you at concerts and you get to watch everything through their smartphone screens? It seems they annoy the performers, too. Looks like Jack White has really had enough of this, and he’s taking phone ban to a new level. From now on, the audience at his concerts will not have the access to their beloved smartphones while the show lasts. They will be asked to keep them locked in Yondr pouches, and they can only unlock them at certain points of the venue.

In April current year, White starts a tour out of the US. His team has issued a statement that the tour will be “phone-free” and there will be “no photos, video or audio recording devices allowed.”

Upon arrival at the venue, all phones and other photo or video-capturing gizmos will be secured in a Yondr pouch that will be unlocked at the end of the show. You keep your pouch-secured phone on you during the show and, if needed, can unlock your phone at any time in a designated Yondr Phone Zone located in the lobby or concourse.

So, you get to have your phone with you all the time, and you can access it in case you need to make a call or send a message. But oh no, how are you gonna post 30 blurry images on your social networks now? Worry not, you’ll get to download them from White’s website and new Instagram account, according to the statement cited at NME.The White’s team encourages you to repost the photos and videos as much as you want and “enjoy a phone-free, 100% human experience.”

Frankly, no matter how often I generally use my phone, I don’t use it at concerts. I want to be “here and now” and I don’t want other people to watch the entire show through my screen. I go to concerts pretty often, and people who do this really bother me and ruin the experience for me. Judging from the musicians like Jack White, Adele, and Josh Klinghoffer of RHCP, things like this also annoy the musicians.

I can understand it: they don’t get a reaction from the audience because everyone’s so busy with their phones. I guess it also doesn’t work to just ask the audience to stop filming and taking photos, so White opted for a more radical move. It’s pretty sad, though, that people need to be asked and even forced to enjoy concerts instead of staring at their phones.

On the other hand, no matter how people with phones at concerts go on my nerves, this is perhaps a bit too radical. It can happen that you need the phone urgently, for whichever reason, and you can’t access it immediately. You need to go through the crowd to get to the point where you can unlock the pouch and use your phone. Even I wouldn’t be glad to have my phone locked away, regardless of the fact that it’s been buried somewhere in my bag during every concert I’ve ever attended.

What do you guys think? Do you approve White’s move and wish more musician followed his example? Or is it too radical and limiting?

« These wedding photos were taken on a space net 400 feet above a canyon
These puppies names are Click, Bokeh, Nikon, Sensor, Skrim, and Gobo »