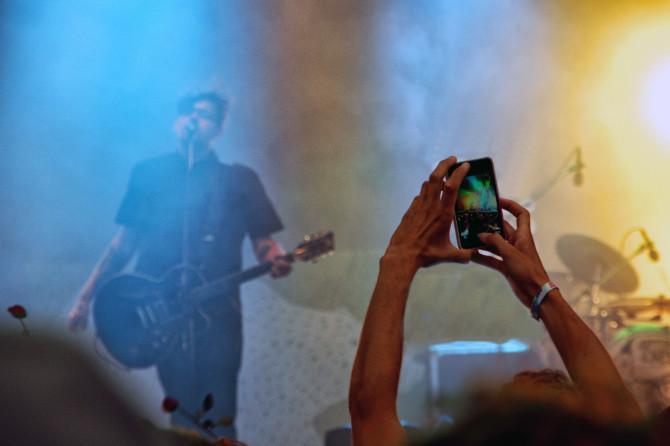 After running a post detailing the ban of tablet photography at Manchester United home games last week, we asked our readers if we thought this might spark a trend and whether or not they thought more venues should and would pick up on the idea. Looking through the comments on that post it appears the consensus rules in favor of the ban and everyone seems to at least hope tablet photography gets banned in more places. If you are one of those people, I have some good news for you. It appears more and more musicians are starting to speak up against cell phone photography by pleading with concertgoers to leave their camera phones at home. Some are even banning such devices altogether.

In an article published today by The Gaurdian, singer Kate Bush has politely issued a request on her website asking fans planning on attending her upcoming sold out concert series to not participate in the event by filming or taking photos using iPhones and iPads, but rather by experiencing the moment on a more personal level.

“We have purposefully chosen an intimate theatre setting rather than a large venue or stadium. It would mean a great deal to me if you would please refrain from taking photos or filming during the shows. I very much want to have contact with you as an audience, not with iphones, ipads or cameras. I know it’s a lot to ask but it would allow us to all share in the experience together.”

Bush isn’t the only performer who has publicly spoken out about the major distraction that is cell phone recording. Beyonce, Roger Daltrey, and Jack White have, among others have, have made it very clear about not wanting cell phones and tablets present during their performance. Indie rock band, Yeah Yeah Yeahs, perhaps, got the ball rolling in 2013 at a NYC performance, when Spin Magazine shared this photo of a sign that was posted upfront and center: 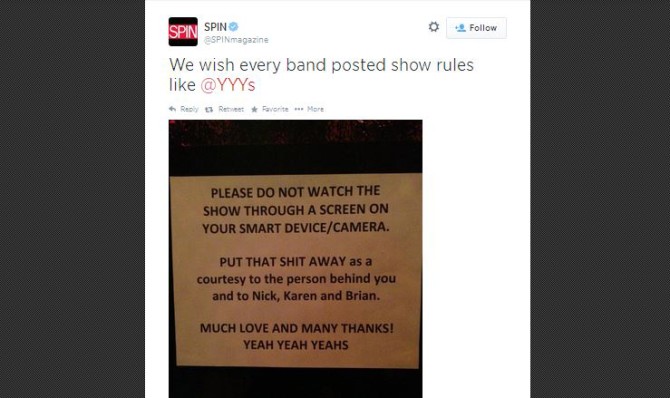 If all this is sounding like music to your ears, you may not want to start celebrating just yet. Apps like Vyclone, which openly promote the use of smartphones and tablets at events, are doing their best at encouraging concertgoers to capture the show to collaborate with and share the videos with other app users.

Meanwhile, in contrast to Manchester United’s ban on tablet photography, dutch footballers PSV Eindhoven’s stadium, Philips Stadion, is promoting free Wi-Fi to attendees of the games which has, to my delight, caused outrage among fans, many of whom cite it as a major distraction not just to those watching the event on a tiny screen, but also for the unfortunate chaps that are stuck behind them.