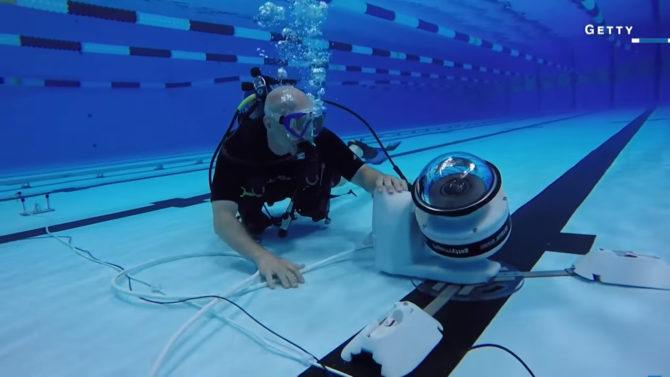 The technological advancements that can be made in just four short years are amazing. 11 time Olympic photographer Al Bello is taking advantage of that fact this year. He’s covering the swimming events using underwater robot cameras.

Robotic underwater cameras at the Olympics aren’t a new idea. Reuters used similar robots during London 2012. But this is the first time Getty will be giving them a try. With an extra four years of research and development, though, these cameras should get some fantastic and unique shots.

In an interview with CNN. Bello spoke about some of the challenges of underwater Olympic photography.

In the past, with a traditional submerged static remote camera, you’d have to visualize the photos you wanted ahead of time and think about what race and stroke you want to capture,

It was limiting; you could only guess where the swimmer was going to be when they came into the frame.

If positioning is a little off, you can miss your swimmer by a mile, so not get the shot at all. With so many events each day, being able to tweak and adjust between them isn’t so easy. Each organisation is also only allowed a single camera in the pool at once, so you couldn’t even cover your bases with multiple cameras.

The robotic unit houses a Canon 1DX Mark II and sits in a fixed place at the bottom of the pool. Although Bello told CNN that they do allow you you “zoom in, tilt, spin or get multiple angles”.

I can now execute many ideas in one session; before, I had the chance to make one happen.

With a remote liveview from a monitor, it sure must take a lot of the guesswork out of the equations. It will be interesting to see how this develops in the future, and what other events robotics can help with.

Do you use any robotic camera tools with your work? Let us know and tell us what you think in the comments.

Here are some awesome shots you can get with camera robots