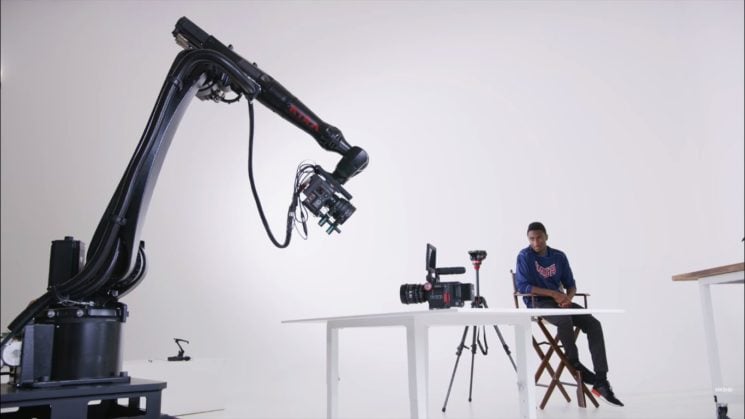 There are different kinds of video gear to make shooting easier and more creative. Tech YouTuber Marques Brownlee went to Portland, Oregon to check out something most of us haven’t tried out: camera robots. He visited the team behind Motorized Precision and tested out some of the camera robots they’ve built. In this video, you can see five creative and amazing camera shots these robots can pull off, as well as behind the scenes footage of how it’s done.

The thing with camera robots is that they can make super-precise and difficult movements that humans could never do. It’s not just the hardware, but the software is also complex and precise.

The first robot Marques tested was Kira. It’s fully metal, extends up to 9 ft tall and has a couple of fully articulating axes. It can move up to 9 ft per second in any direction while carrying up to 40 pounds.

The robot is controlled through MP Studio software, which allows you to also use an XBox controller to move the robot. There are motorized gears which control focus, iris, and zoom on the lens during the camera move. You can control the robot’s speed and move it as fast or slow as you want. Also, every shot is repeatable as many times as you like. Here are some shots Marques got with Kira camera robot.

This shot highlights different parts of the same subjects from different angles.

A “phone on a table” shot, but with a twist. It starts off slow like a normal slider shot, but then there’s a fast movement, showing the phone’s camera up close.

The camera goes up to the top, spins around, and then gets down on the other side. It looks pretty simple in the BTS video, but it gives great results.

For this shot, Marques was holding the phone while the camera made a fast semi-circle around it. The challenging part was that he couldn’t stand perfectly still, so the phone wasn’t in the exact place at all times. Therefore, this shot even needed multiple takes.

Marques also checked out Mia, another robot made by Motorized Precision. It’s a bit lighter and smaller, but “equally impressive,” as Marques explains. He and the team did the final shot with this robot.

The last shot also looks pretty interesting. The camera follows Marques as he walks, and then quickly circles around him and ends the shot in front of him.

As DPReview writes, Kira robot was used in Microsoft’s Surface Studio commercial, at least for the parts that aren’t CGI. So here’s another example of the movements a camera robot can produce:

Make sure to check out the full video to see all the movements and BTS shots, and you can find out more about the camera robots on Motorized Precision’s website.

« What is middle grey and why does it even matter?
NiSi jumps into the lens market with five new F3 Prime Cinema lenses »