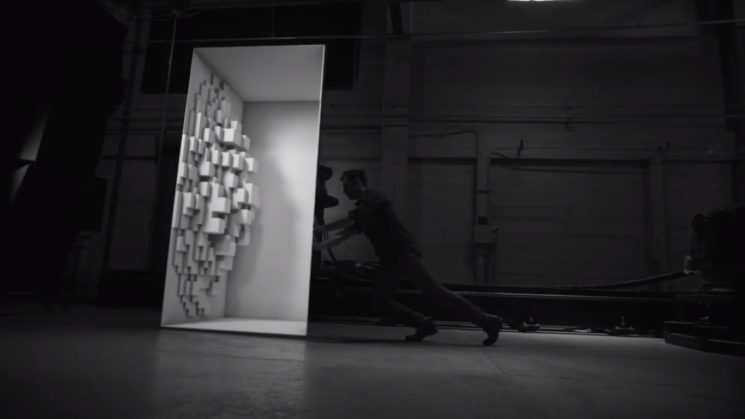 You know those videos you watch and think: “No way is this real, it must be some kind of magic?” A short movie Box by Bot & Dolly will make you feel this way. It’s an awe-inspiring video created with robot-powered projection mapping on moving objects. It transforms two moving flat panels into all kinds of optical illusions, bending, flying and teleporting across the stage. And as for the interaction of the actor and the illusions – there’s no CGI, but everything was captured in-camera.

The creators have also published the BTS video of this magnificent short movie. As Bradley Muknowitz explains, this is a ground-breaking piece no one in the world has ever done before. It’s done with a lot of care and craft, and it combines 3D projection mapping, robots, and live performance. The robots they use are normally used for producing vehicles. And the team behind  Bot & Dolly has pioneered their use in filmmaking.

From the technical standpoint, the creators used 2 large industrial robots, each holding a 4 x 8 ft canvas. The animations are projected onto the canvases as the robots move them with great precision. But as for the conceptual standpoint, it’s a story about the principles of magic. They refer to some traditional magic tricks and include them in the project. They chose five principles, all of which you can see throughout the video: transformation, levitation, intersection, teleportation and escape. So, if you thought “this must be magic,” that’s what they were aiming for, I guess.

The movie was made quite a while ago, but it seems to be rising in popularity all over again. However, it seems that Bot & Dolly aren’t operating anymore, (at least not under that name). Their Facebook page says they’re “permanently closed” and the website doesn’t exist anymore. I don’t know what the reasons are, but if any of you do, let us know in the comments.

Here are some awesome shots you can get with camera robots

July Is Projection Month On DIYP