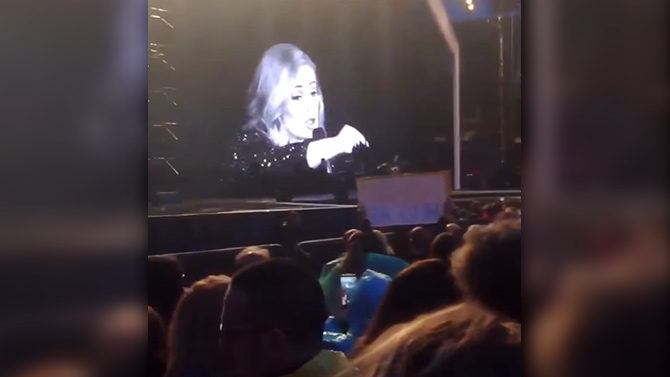 Whenever you use the words “concert” and “photography” in the same sentence, emotions often tend to start flying.  Whether you’re a professional trying to earn a living, being crippled by ridiculous contracts, or a fan who prefers to view through an LCD rather than with your eyes, there’s always some controversy.

This time, it’s Adele, stopping a concert and calling out a fan for not only filming, but setting up a tripod in order to do it!

Visibly upset that somebody was filming her performance during the show in Verona, Italy, the singer told a woman in the audience “Can you stop filming me with a video camera, because I’m really here in real life”.

Of course, it must be frustrating expecting to perform in front of a live audience and being confronted by the little LEDs of a few thousand cellphones.  By the way, just so you know, those cellphone flashes really aren’t lighting up the stage, you’re just wasting your battery.

You can enjoy it in real life, rather than through your camera.

Can you take your tripod down?

This isn’t a DVD.  This is a real show, and I’d really like you to enjoy my show.

Calling out fans isn’t always a great idea, and opinion is divided amongst those on social media.  Some condemn while others praises, but this often seems to be the way with anything like this when it comes to Facebook and Twitter.

Personally, I think the fan got the better deal.  Adele could’ve easily just had security remove her from the venue.  Don’t most concert tickets still have a “No photography” clause?

One thing’s for sure, if you’re going to see Adele in concert, you’ll want to leave the tripod at home.

Should people be allowed to film and take photos at concerts?  Or was Adele right?  Let us know what you think in the comments.