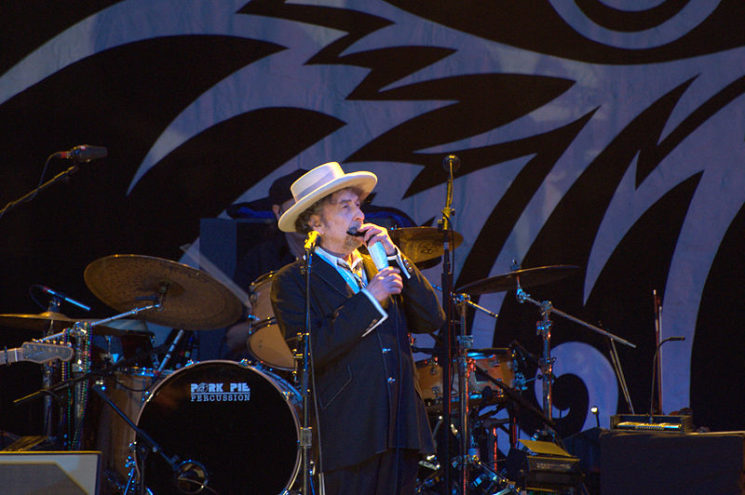 Bob Dylan is a phenomenal songwriter, but when it comes to speaking to fans from the stage, we can say that he is a man of few words. However, this changed on Tuesday evening in Vienna. The crowd tried to take photos of the concert despite the strict “no photo” policy, which made Dylan stop the show and speak to the photo-snapping fans to call them out.

Reportedly, as Dylan and his band were playing Blowin’ in the Wind, smartphones in the audience started showing up. The famous singer got evidently infuriated and spoke to the fans, although I can’t clearly hear what he said. He then started moving away from the microphone, walking backwards. This made him trip over a stage monitor, causing him to nearly hit the floor.

After this, Dylan walked back to the microphone and said: “I’ll say it once again: take pictures or don’t take pictures. We can either play or we can pose. Okay?” He and the band stopped playing and posed for a while, and you can hear the crowd yelling “Play!”

The video of the incident was posted on a fan Instagram page bucketsofbob:

According to The Rolling Stone, Dylan only played one more song after the incident and then walked off for the night. The band finished the show with an instrumental version of Just Like Tom Thumb’s Blues.

Here at DIYP, we’ve covered several cases of musicians who got annoyed by fans taking photos, like Adele or Josh Klinghoffer of RHCP. Jack White even banned smartphones from his concert by making fans use Yondr pouches. And honestly, it’s kinda sad that an incident had to happen to make Bob Dylan speak from the stage.

I’ve said it before and I’ll say it again: I’m extremely annoyed by people who take photos and videos throughout a concert. First of all, they are blocking the view for me and other people behind them. And second, I can’t understand why they can’t leave the freakin’ smartphones for once and simply enjoy the music. Apparently, the musicians also find the latter annoying as well, and I can’t blame them. If they play music for you, the least you can do is listen to it. That should be the reason why you’re at the concert, anyway.

Adele stops concert to call out a filming fan, telling her “take your tripod down”