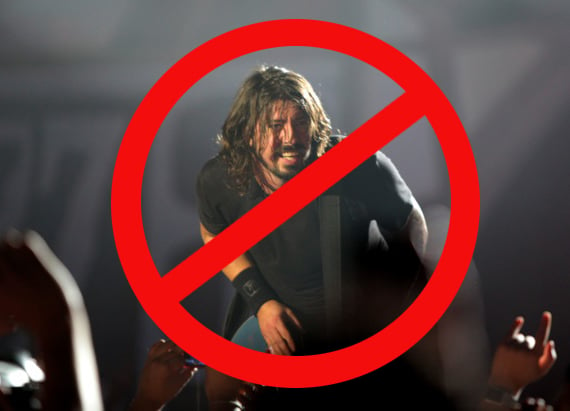 The Foo Fighters will be performing in Washington this weekend with a triple celebration: the 4th of July, a 20th anniversary and coming back to their home state.

The Washington City Paper, however, will not send a photographer to cover the show has they had planned. The reason? A Taylor swift-like contract that according to the paper ‘sucks’, and the paper’s refusal to give the band editorial control.

Pointing out the irony of bands restricting professional photographers when there are thousands of fans with cameras, and maybe in an attempt to stick it a bit to the band, the WCP will run photos taken by concertgoers.

This is the second media outlet stating it won’t send a photographer to cover a concert due to exploitative contracts, after the Irish Times boycotted photos from Taylor Swift’s Dublin performance.

Earlier today the WCP stated it will not be sending its freelance photographer to cover the homecoming concert due to the contract he was given by the band’s management company.

Much like Taylor Swift’s contract, the paper would have to agree to use photos from the concert just once and only in one article, but the band also demands it approves the photos used by the paper and that all copyrights will transfer to them.

Think that’s ridiculous? Get this: the contract gives the band “the right to exploit all or a part of the Photos in any and all media, now known or hereafter devised, throughout the universe, in perpetuity, in all configurations” – without getting permission from the photographer, paying him or even letting him know about it.

“That is exploitation of photographers, pure and simple”, said the WCP, later adding that by signing the contract they “would be signing over editorial control to the band and their management company. And unless we get to pick the set list, that’s never going to happen”.

Being a newspaper, the WCP reached out to the Foo Fighters’ management company about this matter and was assured this type of contract is “standard” and intended to “protect the band”.

I’m not quite sure how giving the band the right to use photos for free is supposed to protect them, and obviously the WCP didn’t buy these excuses either. Calling BS on the explanation it received, the paper gave the Rolling Stones as an example of a massively successful band that does not demand newspapers sign over their photos.

The post ends with the WCP calling on concertgoers, who the band and its ‘overzealous’ management can’t police, to email or tweet their best photos.

“If we run it in next week’s print edition, we’ll pay you for it” the paper stated, adding that “we won’t ask you to sign over the copyright or your first born, either”.

I was glad to see the Irish Times openly speak up against Swift’s contract and actually do something about it (or not do in this case), and am even happier to see that the Irish paper is not alone.

I’ve said it before and I will say it again, musicians benefit from having photographers and the media cover their concerts, but it’s about time they stop benefitting at the photographers’ expense. Some of them anyway; the Rolling Stones are cool.

[Washington City Paper via NPPA | Lead image based on: SobControllers]

Newspaper Navigator is a free online base of 1.56 million newspaper photos