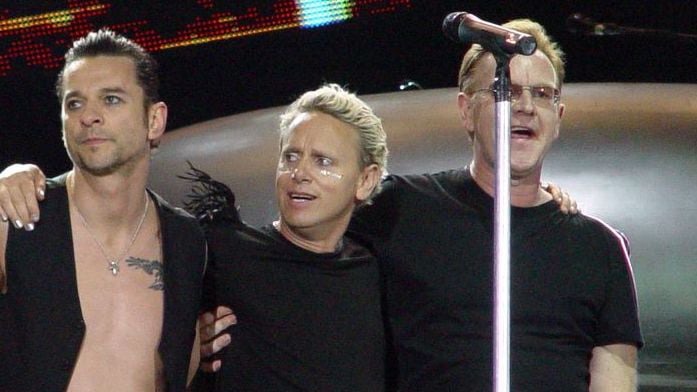 Back in the 1980s, fans weren’t allowed to bring their cameras to concerts, but a Depeche Mode fan had an idea. He threw a roll of film on stage during the band’s concert with his name and address attached to it and a plea to the band to take photos.

It wasn’t only the idea that was cool, it was the band’s reaction, too. They picked up the film, took some photos, and later mailed them back to the fan. His widow recently shared them online and the story made my heart melt.

Depeche Mode played at the Ulster Hall Belfast in 1983. Like the rest of the fans, young Brian McDonnell was unable to bring his camera so he just brought the roll of film, threw it on the stage, and hoped for the best. Depeche Mode were also young back then, formed only three years before. Their debut album Speak & Spell was launched in 1981, so the photos they took show the very young members of the band in what appears to be a dressing room. Which, when I think about it, is even better and certainly more personal than photos from the concert.

When @depechemode played Belfast in 1983, a young fan called Brian McDonnell, unable to bring a camera into the Ulster Hall, threw a roll of film with his name and address on it onto the stage and let DM take the pictures. These are what the band sent him back. pic.twitter.com/wAeAxuAcUY

Sadly, Brian passed away after suffering a heart attack 20 years ago at only 37 years of age. His sister, Anne McDonnell-Lawrence, only recently shared the photos Depeche Mode took, revealing that her brother was a life-long Depeche Mode fan. Just like yours truly, by the way.

“Depeche Mode was his favourite, he always went on about them,” Anne told the BBC. “All I remember is him telling me he was at the concert and he had brought a film for a camera with him – he wrapped his name and address around it and asked them to take photos and send them back to him.”

Anne reveals that brian never thought he would even get a response. However:

“I don’t know how long after, but he got the film sent back to him. That was all photos of Depeche Mode.”

Anne said that Brian’s anniversary was in August this year, and how that is a long time. However, she added that the attention around the photos is just what he would have loved

“Brian loved being the centre of attention, he loved to party, he loved to sing,” she said. Even though 20 years is a long time, she said that this is Brian saying to her “You’re not paying me anymore attention, I want attention.” “I think he set it up,” she adds.

Even today, fans aren’t allowed to bring “serious” cameras, sometimes even phones, to concerts and festivals. Anything with an interchangeable lens is not allowed, but most venues and performers allow that pretty decent camera that also happens to make phone calls. needless to say, it wasn’t an option back in the ‘80s, so I really loved this idea, and the fact that Depeche Mode played along.

I personally found this story moving for so many reasons. First, it’s Depeche Mode, one of my favorite bands of all time. I was lucky to see them live in 2013 in Belgrade. I wasn’t near the stage enough to throw them a roll of film, although I doubt that they would act the same way nowadays that they’re so huge. Then, I was sorry to hear that Brian passed away, but the fact that he got the photos from the band filled my heart with joy. Finally, one of Depeche Mode’s founding members, Andrew Fletcher, died earlier this year, so these photos serve as a lovely reminder of the band’s beginnings and of Andrew himself.

How to turn a small home studio into a concert stage