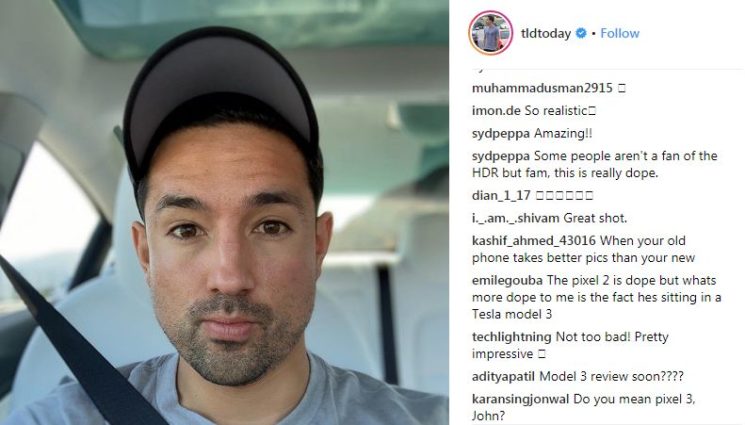 YouTuber Jonathan Morrison caused some stir on Instagram and Twitter on Saturday and trolled both Apple and Android users with a single photo. He posted a selfie with a caption: “Pixel 2 Portrait mode ? rocking the smalls hat ?  thoughts?” Android fans rushed to praise the image quality and of course, to bash the iPhone. But a day later, Jonathan revealed the truth: the photo was actually taken with an iPhone XS.

When Jonathan posted the selfie, the users were quick to comment on how the effect is “better than the iFail” or “better than the crap iPhone.” Many of them referred to the so-called “Beautygate,” or the “permanent beauty mode,” which we covered here. It turned out that noise reduction is what beautifies you, as Halide designer explained. Google Pixel 2 fans were quick to judge from a single selfie.

Around 3:18 of the video below, you can hear Jonathan talking about the little joke he pulled off. He revealed that the photo was actually taken with an iPhone X, and I believe that this left many Android fans perplexed.

Essentially, it wasn’t Jonathan’s intention to offend or mock anyone. The goal was simply to show that you can appreciate Apple even if you’re in the Android team. It works the other way around too if you ask me. YouTuber Marques Brownlee put it quite nicely:

The moral of the story is if you’re super passionate about good tech (like most of us here are), there’s almost no way to love one thing without at least appreciating the greatness of the others too.

Personally, I’ve always found those arguments between Android and Apple fans a bit ridiculous. Just like both Jonathan and Marques said, you can appreciate good tech even if it doesn’t come from your favorite manufacturer. After all, how can you even tell the difference just by looking at a compressed, tiny image on your phone screen and on Instagram? No matter which “team” you belong to, the fact is that there are good smartphone cameras out there, and they’re getting better and better.