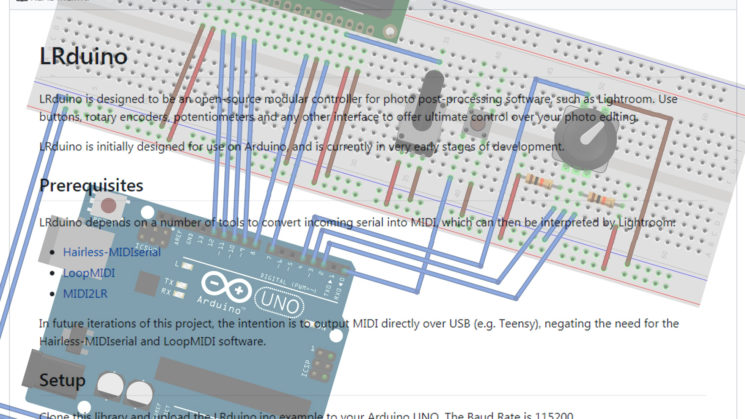 Control decks for Lightroom and other applications seem to be becoming all the rage these days. And for good reason. I’ve got the Loupedeck+, you can check out the review here, and it’s becoming a pretty valuable tool. More so for me if they ever add DaVinci Resolve support, though.

But what if you already have an Arduino and a bunch of components laying around and want to save some money? What if you just want to tinker and learn and play around with it for yourself? Well, for that, meet LRduino.

LRduino is an open source modular controller that simulates a MIDI device. It’s a bit like this, except you’re making your own controller, with your own buttons, knobs and dials to work exactly the way you want it to.

The whole project, as I mentioned is open source, released under the GPL, which means it’s free for anybody to download, build and expand upon. It’s designed to give you the basic building blocks to make your own creations. The project’s creator, Ben Trew (Bixx) writes that the whole idea is about DIY, “however poor the end result might be”.

Exactly how poor the end result might be will be entirely down to you, your own abilities, and how much effort you want to put into things. You might just build something on a breadboard, or you could go full on with custom PCB and a fancy 3D printed enclosure. The choice is yours.

Yes, ultimately, it might be cheaper to just pick yourself up a Behringer X-Touch Mini, but where’s the fun in that?

To find our more about LRduino and grab the code & plans for yourself, head on over to Github.

I made my own digital camera using an Arduino, a projector and a photoresistor