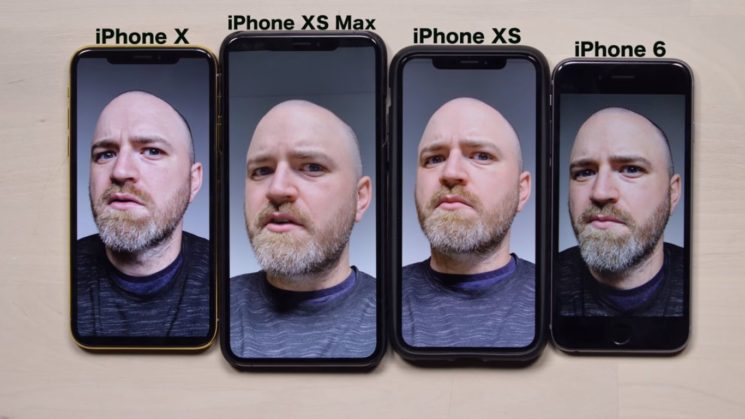 Last month, Apple announced its latest iPhone models. There’s the iPhone XR, the iPhone XS and the iPhone XS Max. There aren’t many changes in comparison to the iPhone X’s camera, to be honest. But Lewis Hilsenteger of Unbox Therapy noticed something strange about the latest models. It looks like the “beauty mode” is always activated, and you can’t turn it off.

iPhone XS portrait seems like it’s doing more aggressive skin smoothing. This is straight out of the camera no edit. #wokeuplikethis pic.twitter.com/QB3xhvyTby

Lewis took a photo with an iPhone X Max and noticed that his face looks kinda as if he’s wearing makeup. He accessed the settings and noticed that the “Smart HDR” feature can be switched off. Lewis switched off Smart HDR, but it didn’t make any difference to portraits. They still looked as if he were wearing foundation.

Next, Lewis took selfies with iPhone X, iPhone XS Max, iPhone XS and iPhone 6 and compared them. The results from the older models weren’t even close the images from the iPhone XS Max and iPhone XS. On the newer models, his skin looked flawless and his beard had uniform color, even his eyebrows looked different.

This iPhone XS feature was discussed on Reddit, where users are referring to it as Beautygate. Lewis points out that it’s a popular feature in certain markets, and perhaps Apple wanted to focus on them. But still, why wouldn’t Apple make it possible to toggle the feature or turn it off? After all, you can do that with any other phone’s “beauty mode”.

Personally, I think this is a pretty bad move from Apple. Social media and overly-edited photos already ruin self-confidence and mental health in young people, as studies have found. Selfies can have a huge impact on how people see themselves. And if the “beautified” image is set to be the default… It sort of means that the real, unedited you just isn’t good enough. And that’s a horrible message to send.