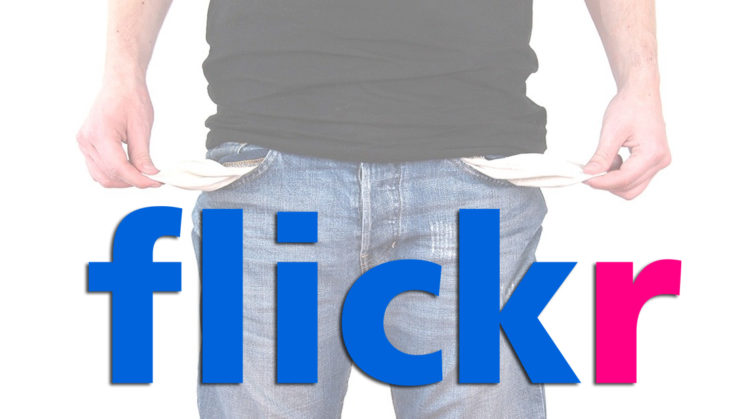 Ever since SmugMug acquired Flickr, the platform has seen some positive changes. However, it turns out that SmugMug bit off more than they could chew. The company is losing money, so they sent out an email to Flickr users asking them to help by upgrading to Flickr Pro.

When Flickr was on the verge of being shut down, SmugMug stepped in and saved it. Over the past two years, there have been some pretty epic and long-awaited changes. First and foremost, there’s no more mandatory Yahoo login. Some significant changes were introduced when it comes to the upload limit. Having a Pro account makes sense again, while free accounts are not severely limited to 200 uploads as they were before. Some photographers protested, but many others (including me) thought it was a good idea.

Flickr also teamed up with Pixsy to protect photographers from image theft, and they brought back the printing service. And the most recent upgrade allows you to discover and host photography events.

However, it seems that implementing all these changes is more than SmugMug and Flickr can financially bear. In the email sent out to its users, SmugMug Co-Founder and CEO Don MacAskill openly asks the community for help. It’s not a plea for donations, but a plea to pay for Flickr Pro and help the company get back on its feet.

“Hundreds of thousands of loyal Flickr members stepped up and joined Flickr Pro, for which we are eternally grateful. It’s losing a lot less money than it was. But it’s not yet making enough.”

MacAskill notes that Flickr is “the best value in photo sharing anywhere in the world.”

“Flickr Pro members get ad-free browsing for themselves and their visitors, advanced stats, unlimited full-quality storage for all their photos, plus premium features and access to the world’s largest photographer-focused community for less than $5 per month.”

As of recently, Pro users also get to view their photos in 6K resolution. But if none of this is convincing enough – well, Pro users don’t get their photos deleted after they pass the 1,000 uploads limit. That photos get deleted is the only bad side of the new upload limit policy, if you ask me. But it is pretty bad, and for me, it would easily be the only reason to pay for Flickr Pro. But I’m still far from 1,000 uploads.

“We didn’t buy Flickr because we thought it was a cash cow. Unlike platforms like Facebook, we also didn’t buy it to invade your privacy and sell your data,” MacAskill writes. “We bought it because we love photographers, we love photography, and we believe Flickr deserves not only to live on but thrive. We think the world agrees; and we think the Flickr community does, too. But we cannot continue to operate it at a loss as we’ve been doing.”

To prompt users further to pay for Flickr Pro, the company has done two more things aside from sending out the letter. First, they’re offering a 25% discount to Pro account earlier than planned. “We’re launching our end-of-year Pro subscription campaign on Thursday, December 26, but I want to invite you to subscribe to Flickr Pro today for the same 25% discount,” MacAskill writes.

The other thing is that, in early 2020, the price for Flickr Pro will be increased. It’s not noted how much, but MacAskill writes that it will be a “small price increase,” adding that “this is truly the very best time to upgrade your membership to Pro.”

As a Flickr user, I received an email from the company with a plea for help. But even if you haven’t got it, you can read it on Flickr Blog.

Honestly, I don’t know what to think. I find this pretty sad and kinda alarming. As I mentioned before, I’m still on Flickr. I can’t just leave it after ten long years and I wouldn’t like to see it come to its end. But on the other hand, I still don’t need the Pro account as I’m far from 1,000 uploads. Sure, I will probably upgrade to Pro when I reach the limit, but I upload new photos pretty rarely so that probably won’t happen for another year or so.

Inspired by Amanda Palmer’s The Art of Asking I recently read, I believe that we should openly ask for help when we need it. And this is just what SmugMug and Flickr did. I’m sure it wasn’t easy for them to send out the letter like this and to be completely open and honest about the situation. But I can’t escape the feeling that, maybe, this could have been done differently. A GoFundMe campaign might have been a better idea, considering that even those who aren’t on Flickr could help out. But that’s just my opinion.

What do you think of all this? Has this letter affected your decisions and opinion regarding Flickr? Will you upgrade to Pro, leave Flickr, or do nothing? Let us know in the comments.

The problem with Flickr’s plea for help

image.canon is down after losing some of its users’ photos and videos